Leaving the historic gold-mining town of Coulterville and driving east, then north, on Greeley Hill Road (J132), also known as the John Muir Highway, climbs into the High Sierra.

The turn east on Hwy 120 take Hetch Hetchy Road into the spectacular Stanislaus National Forest, for the ride over the crest above the expansive Grand Canyon of the Tuolumne River. 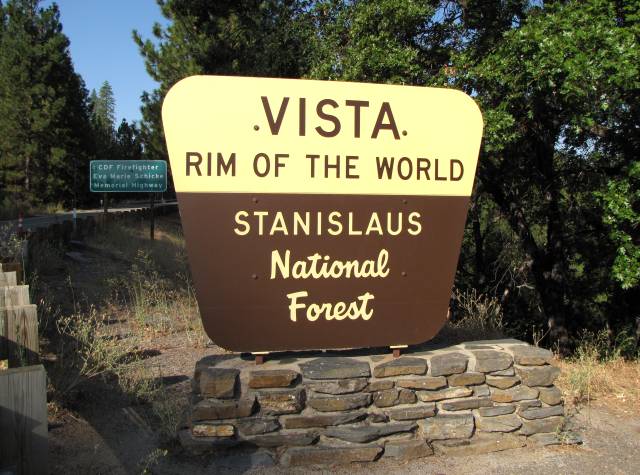 The beginning of the Stanislaus National Forest - California, USA 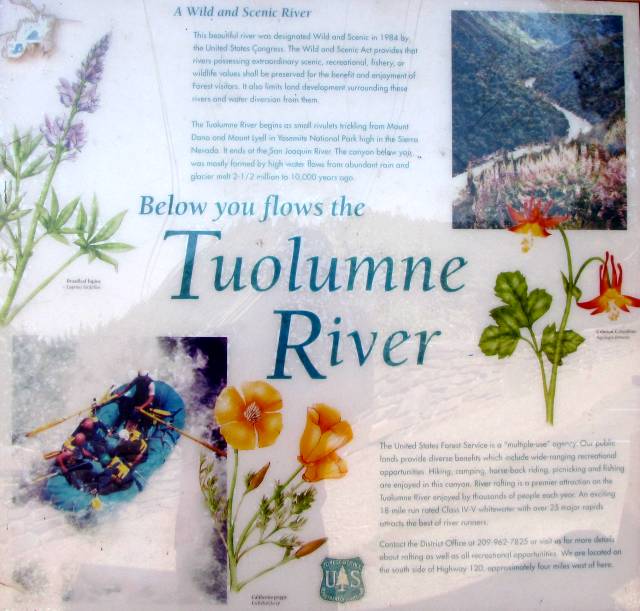 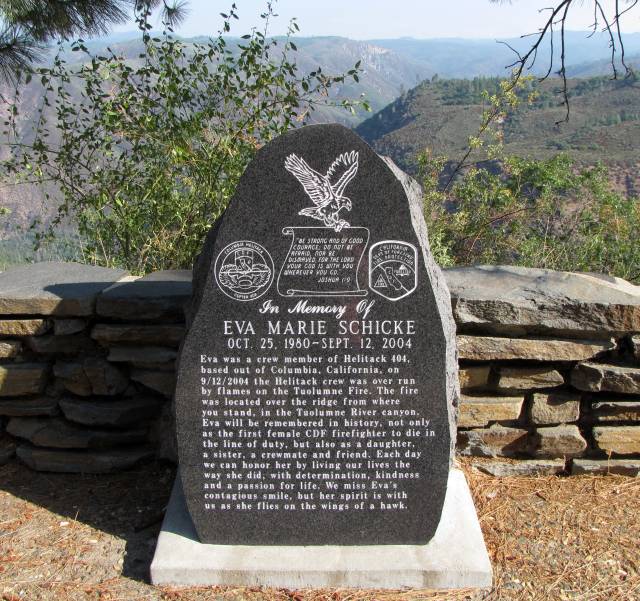 Monuments to brave, courageous and dedicated people who gave their lives are commonly placed at roadside near fire locations.  There are a lot of them. Everywhere.

Camp Mather precedes the entrance to this northwest portion of Yosemite National Park.

Hetch Hetchy Road narrows and descends on twisting road, against rock wall, to the loop at O'Shaughnessy Dam and the small parking area beyond.

The name Hetch Hetchy is a derivative of the Miwok Indian word 'hatchhatchie' which means 'edible grasses'. 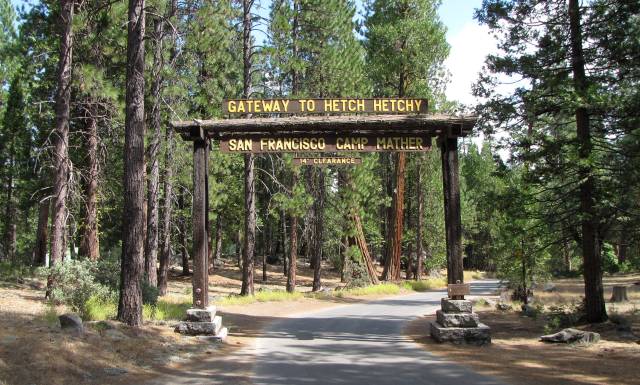 The short walk from parking provides the opportunity to absorb the incredible view of the Tuolumne River flowing west through the impressive and beautiful Poopenaut Valley which is filling up with mid-morning sun. 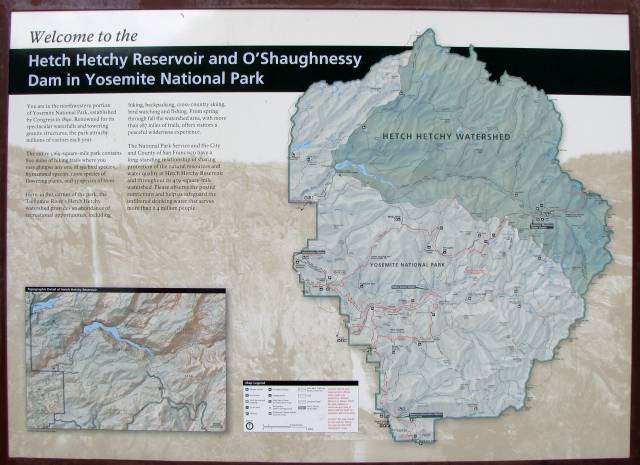 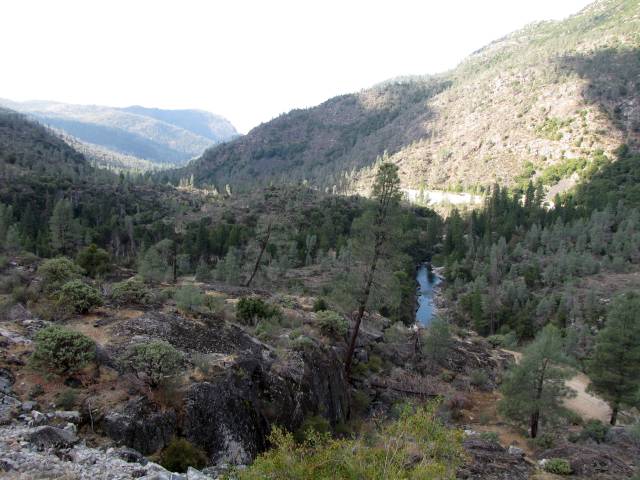 On the walk east towards the O'Shaughnessy Dam, containing the Hetch Hetchy Reservoir, the enormity and grandeur of the facility become overwhelmingly apparent.

There is massive opposition to the project spearheaded by Yosemite naturalist, developer and defender John Muir who garnered support from the Sierra Club, as well as every environmental organization and most states in the United States.

In addition to the obvious impact to the natural beauty of Hetch Hetchy Valley, an important point of contention was the illegality of creating a commercial project on protected National Park land.

John Muir, who devoted a good portion of his life to developing and preserving Yosemite National Park died on December 24, 1914 at the age of 76.  Some say he died of a broken heart for his loss in the battle to save Hetch Hetchy.

San Francisco's Chief Engineer Michael O'Shaughnessy is charged with the responsibility for construction.

Beginning in 1914, the monumental undertaking requires the construction of a 68 mile (109 KM) railroad, a 156 mile (251 KM) aqueduct and 85 miles (136 KM) of tunnel in addition to the dam which will capture the outflow of the Tuolumne River from a Yosemite watershed of 459 square miles.

Michael O'Shaughnessy dies on October 12, 1934, just 16 days before the first water arrives at San Francisco from the dam at Hetch Hetchy which bears his name. 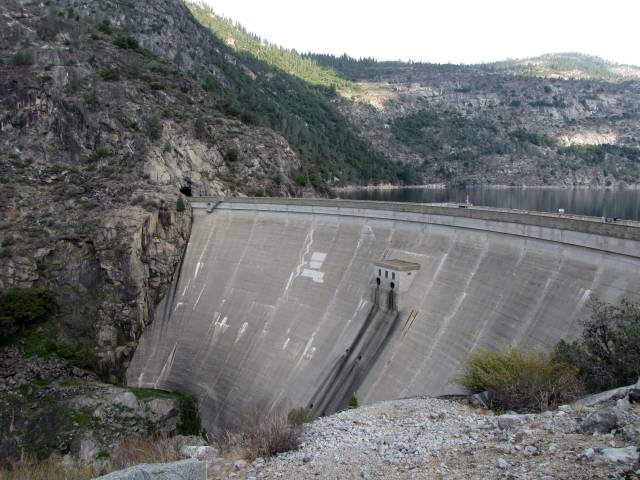 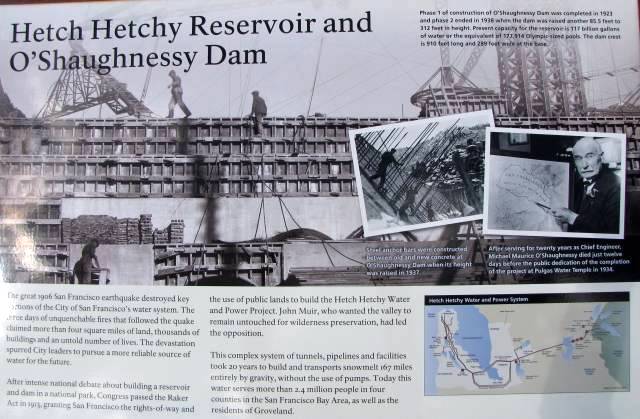 Walking across the top of the 900 foot-wide (270 m) O'Shaughnessy Dam, creates countless photographic opportunities of numerous interpretive exhibits and the spectacular views in every direction. 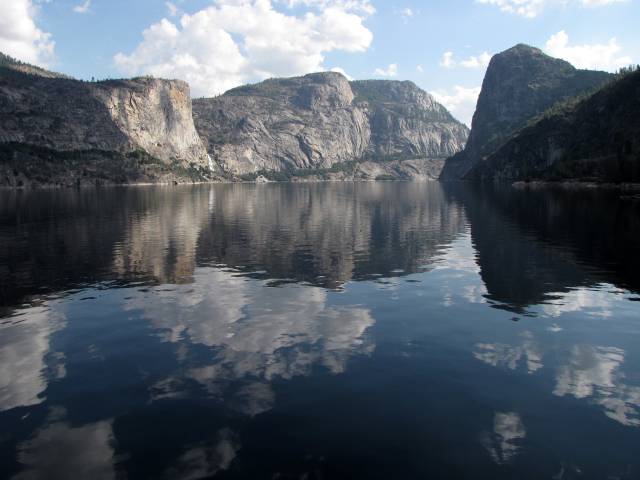 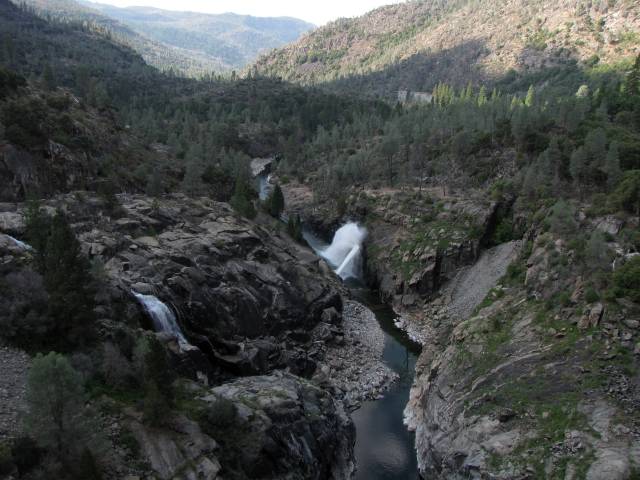 The view west from the top of O'Shaughnessy Dam over Tuolumne River, and the Poopenaut Valley. 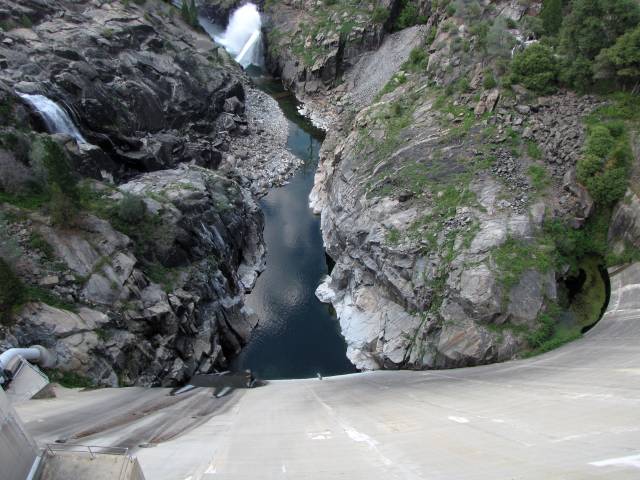 The view straight down the O'Shaughnessy Dam, slightly right of center 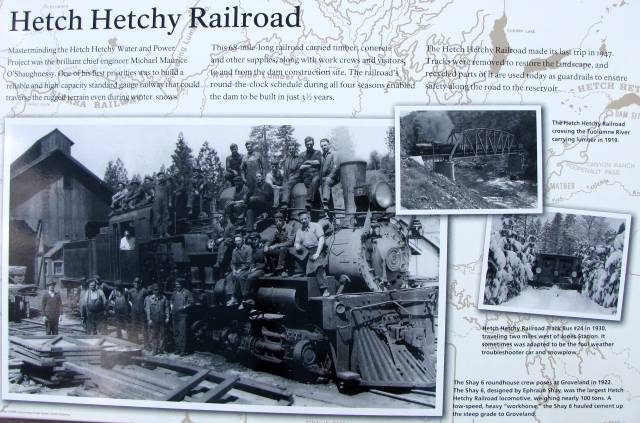 The need for the water supply is urgent as San Francisco and the Bay Area continue to grow rapidly.  A 68-mile-long, standard gauge railway is constructed so visitors, work crews, and materials like concrete and lumber, can be brought to the construction site expeditiously.

At the end of the project, the Shay 6 locomotive engine makes its final trip in 1947 before the railroad tracks and infrastructure are dismantled and removed. 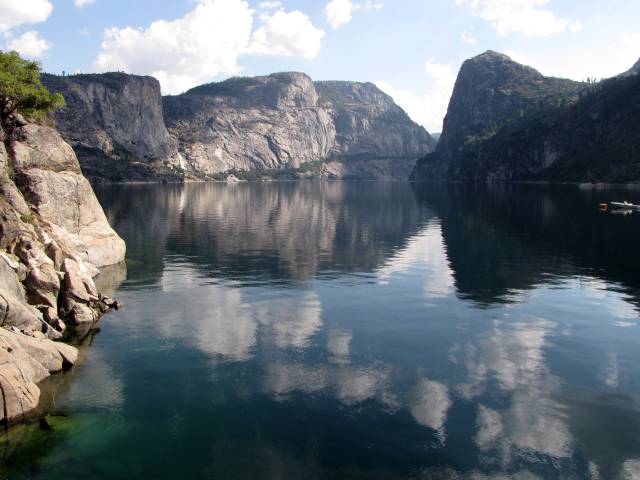 From the north end of O'Shaughnessy Dam, looking east along the Hetch Hetchy Reservoir, Kolana Rock is on photo right and Hetch Hetchy Dome is near photo center on the far side of Wapama Falls. 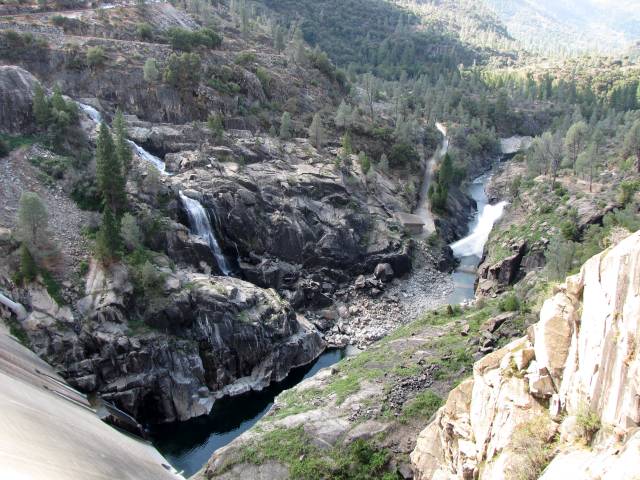 On the north side of the O'Shaughnessy Dam, a tunnel leads through the rock border to a hiking trail along the north shore of the Hetch Hetchy Reservoir. 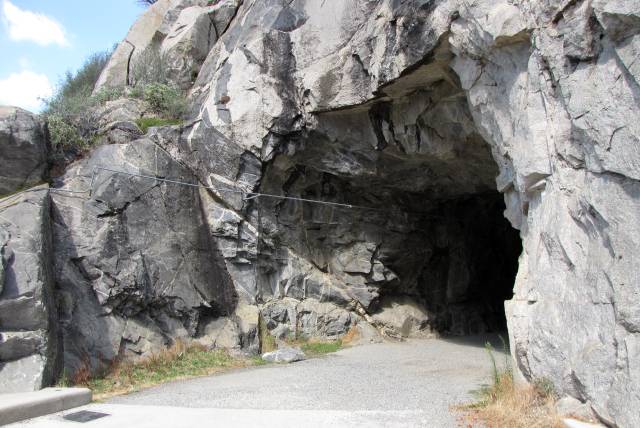 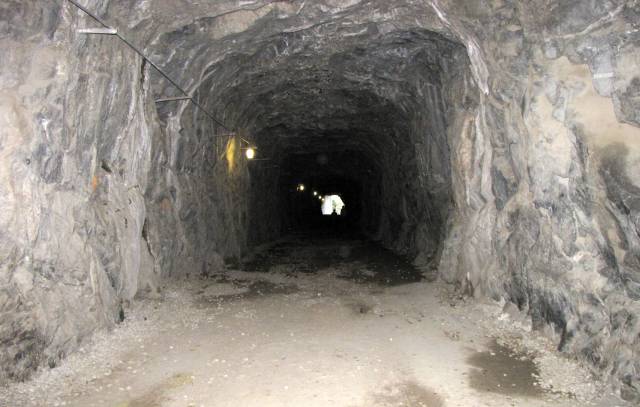 Views of the Hetch Hetchy Reservoir from the far side of the tunnel, down the length of the waterway with surrounding mountains, become increasingly spectacular. 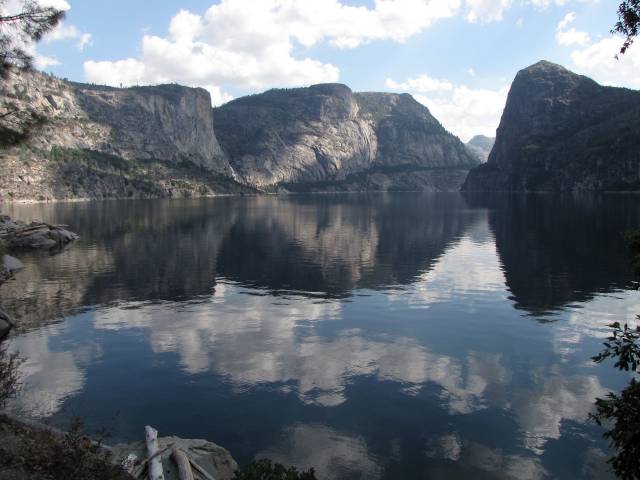 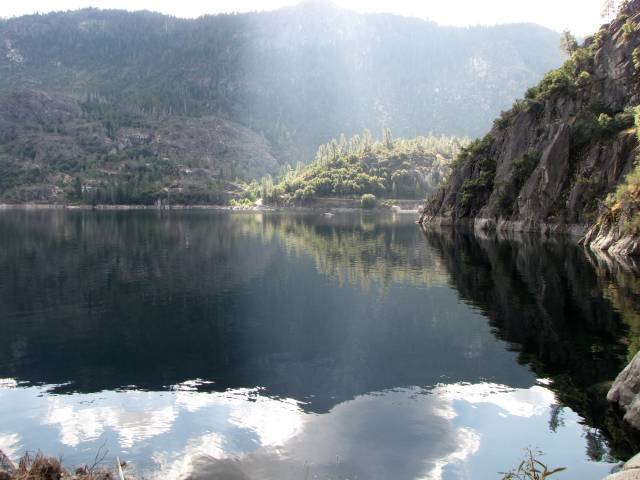 The trail follows the north shore to Tueeulala Falls and Wapama Falls.  The moderate hike to Wapama Falls is 5 miles (8 KM) round trip from O'Shaughnessy Dam with an elevation gain of 300 ft (91.4 m).

This day there is time to hike only partway but the following telephoto pictures provide a glimpse of the thundering white water of Wapama Falls plummeting 1,400 ft (427 m) into the Hetch Hetchy Reservoir.

The trail continues past the base of Hetch Hetchy Dome across Tiltill Creek and north to Tiltill Valley then past Mount Gibson to Tiltill Mountain, or alternatively, across Rancheria Creek to Rancheria Falls 6.7 miles (10.7 KM) one way from O'Shaughnessy Dam. 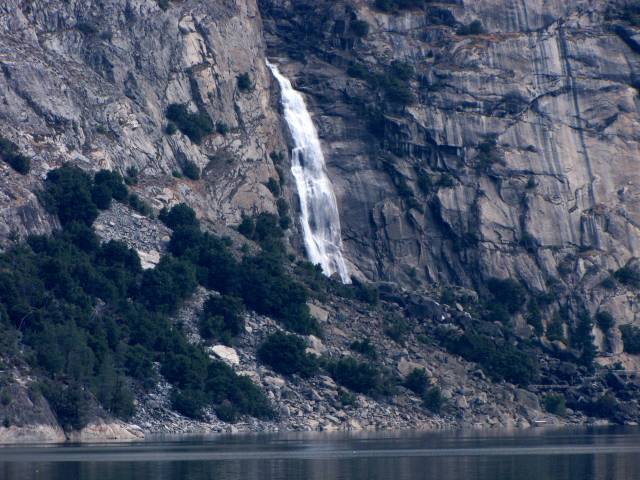 The spectacular white water of Wapama Falls roars 1,400 ft (427 m) down the west side of Hetch Hetchy Dome into the Hetch Hetchy Reservoir. 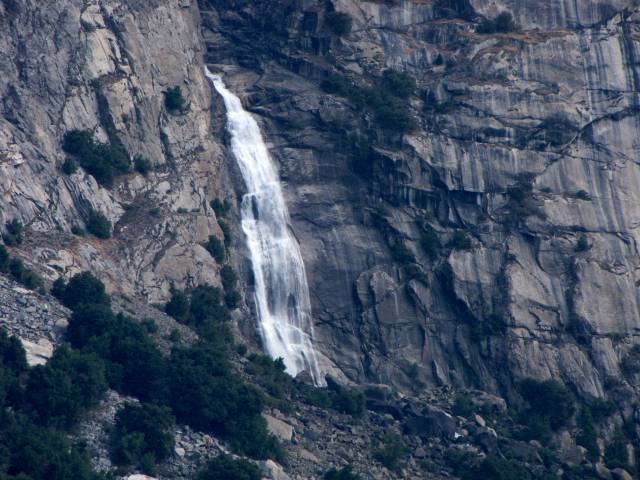 The hike back to the car is via the same route taken in.  The drive from parking proceeds up the narrow, winding, paved road carved into the side of Poopenaut Valley.  There are no guard rails.

The Dodge Charger is not a small car and without opposing traffic a reasonable safety margin can be established by driving in the middle of the road.

When any vehicle approaches on their descent into the Hetch Hetchy Reservoir, they hug the inside rock wall and the Charger assumes close proximity to the outside edge of the road suspended over the steep, 1,300 ft (396 m) wall of Poopenaut Valley.  The reason for the valley's name is becoming more obvious

The exciting, short drive is not for the faint of heart when two larger vehicles need to pass on the narrowest sections of the road. 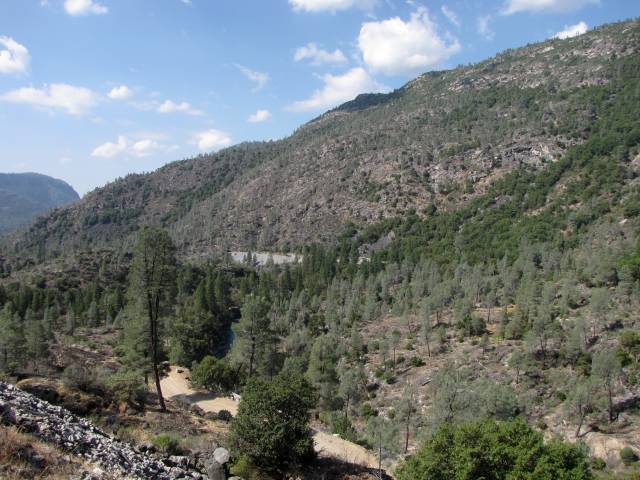 This time-constrained visit to Hetch Hetchy is little more than a reconnaissance mission.  There are plenty of outstanding hiking opportunities here.

A few of the most popular and accessible hikes include Wapama Falls, Rancheria Falls, Poopenaut Valley from Hetch Hetchy Road, and Lookout Point, or Cottonwood Meadow and 7,751 foot (2,363 m) Smith Peak south-east of the landmark Kolana Rock.

Additionally, there are many multi-day backpacking missions in Hetch Hetchy.  An example would be the awesome scenery of the 29 mile (46.4 KM) Laurel Lake/Vernon Lake/Rancheria Loop.

There is no shortage of opportunity and the Hetch Hetchy area, by nature of its remoteness, provides more of a wilderness experience in this High Sierra region of Yosemite National Park.

The return drive home to Edmonton and Calgary, Alberta, Canada, first on the Hetch Hetchy Road, then on Big Oak Flat Road to Hwy 120 makes a brief stop at the General Store in Groveland, California where purchasing three bottles of quite respectable 2009 Crane Lake Chardonnay, winner at the 2011 State Fair, costs a grand total of $10.00 US.

Driving Hwy 120 through beautiful forest and historic towns whose authenticity is compromised by little more than modern vehicles is a fabulous experience which recalls the simpler and less stressful times of a century ago.

Swinging north on Hwy 120 and driving past places with names of Mocassin and Chinese Camp, the Don Pedro Lake Recreation Area reveals a fascinating feature of this reservoir along the Tuolumne River which provides water and power to the growing metropolis of The San Francisco Bay Area. 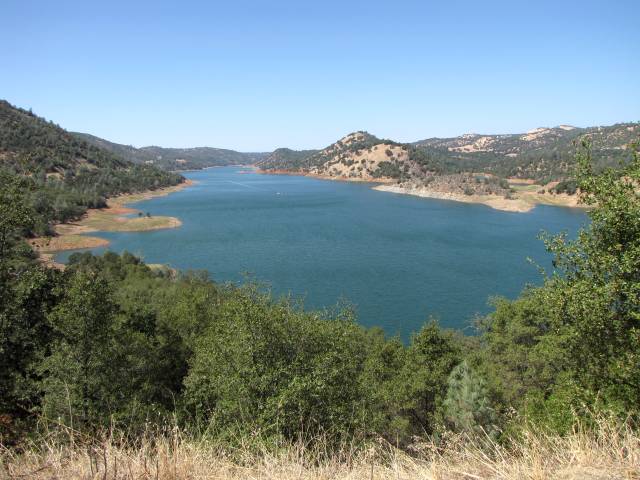 One small section at the end of the Don Pedro Lake Reservoir, California 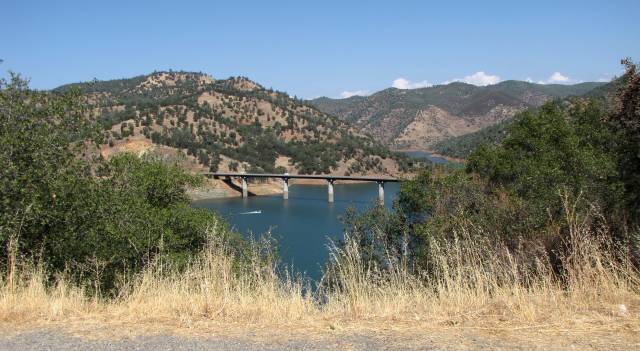 Don Pedro Lake is created by construction of the Don Pedro Dam on the Tuolumne River.  Beneath its surface lies the old mining town of Jacksonville, California.

In 1850, Jacksonville was the principal river town in the area.

John Muir would be proud of those who follow in his footsteps.  Information about reclaiming Hetch Hetch Valley can be obtained from the Sierra Club. 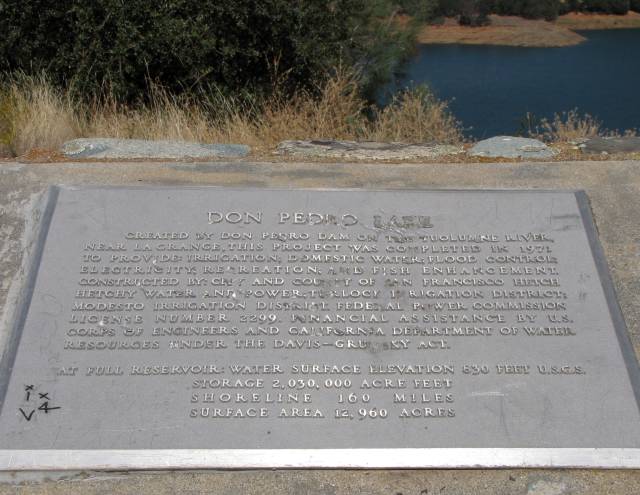 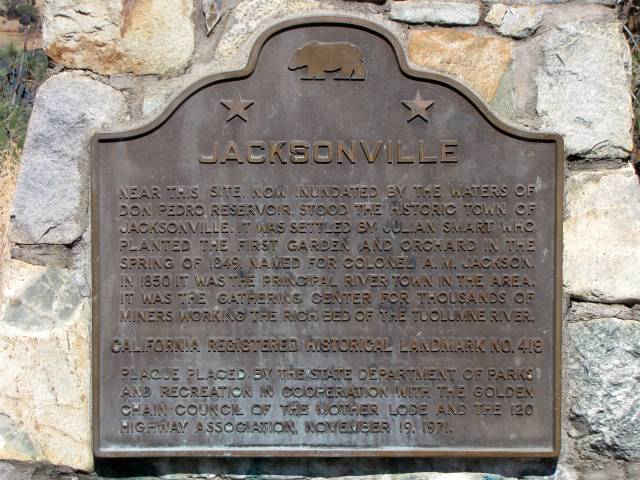 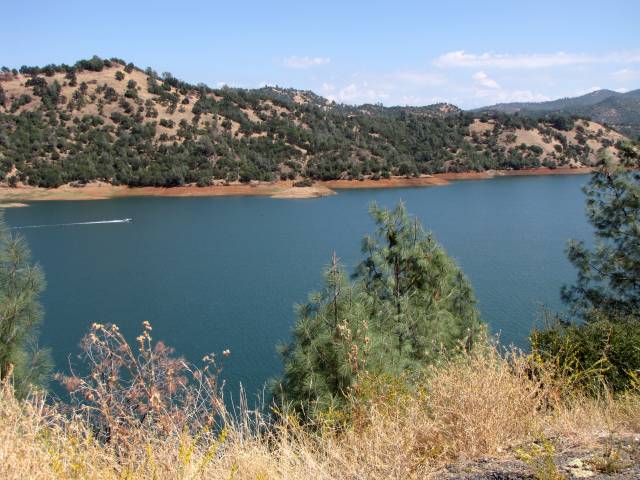 This day will complete with a short 35 mile (56 KM) drive west through the desert on Hwy 120/108 from Don Pedro Lake to Oakdale, California, where the pool at the motel provides welcome relief from the heat before dinner at the nearby Denny's Restaurant. 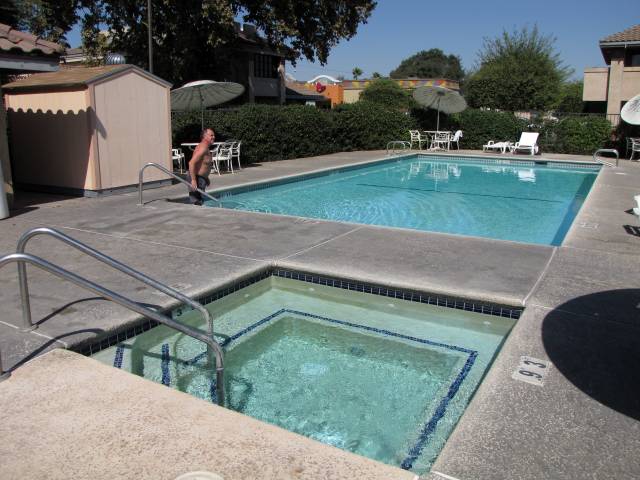 Tomorrow will be a driving day.