Occasionally, a place immediately feels just right and seems like home.  Many years ago, Panguitch, Utah became one of those towns which immediately provided a sense of belonging.

On this Yosemite National Park trip, Mariposa, California, with accommodation at Mother Lode Lodge, is the staging location for Hwy 140 access along the Merced River to hikes in Yosemite Valley.

The accommodation is comfortable, central, friendly and meticulously maintained by the owners.  The largest room with easy, convenient access at street level will become home for the next few days.

Near the entrance, there is a Memorial Bench dedicated to Woody, a family man and a CDF fire fighter.  Fire is a by-product of attempting to tame the desert and an ever-present and ominous reality of living here.  Fire crews are ever-present and visible. 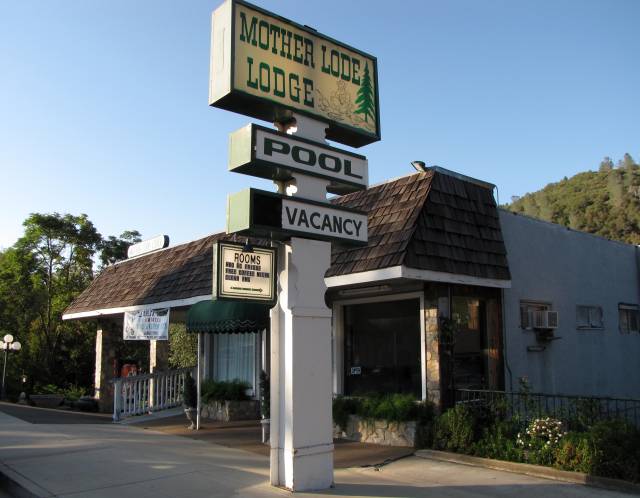 The Mother Lode Lodge on the main street of Mariposa, California. 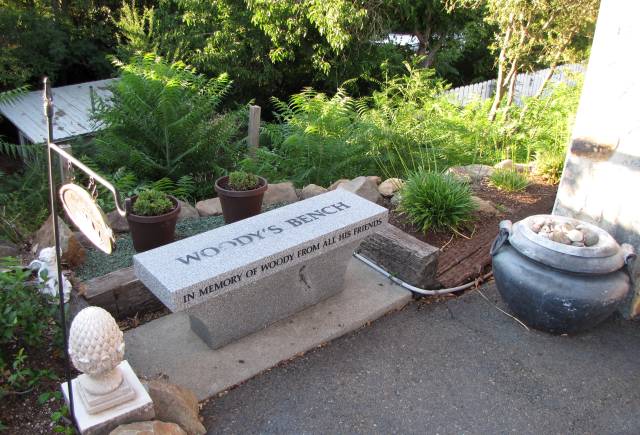 Woody's Bench - placed  near the entrance to Mother Lode Lodge.  Brother to Elissia, Uncle to Alyssa and placed by comrades in Cal Fire.

Cal Fire, also known as CDF - California Department of Forestry and Fire Protection is large and, by necessity, well-funded, intensely organized and frequently the fragile barrier between life and death.

Mariposa is on the infamous Highway 49 created by the California Gold Rush.  Mariposa County is arguably one of the most influential locations in the development of Northern California along the west edge of the Sierra Nevada Foothills.

The local weekly newspaper is the Mariposa Gazette which has published continuously for more than 150 years. 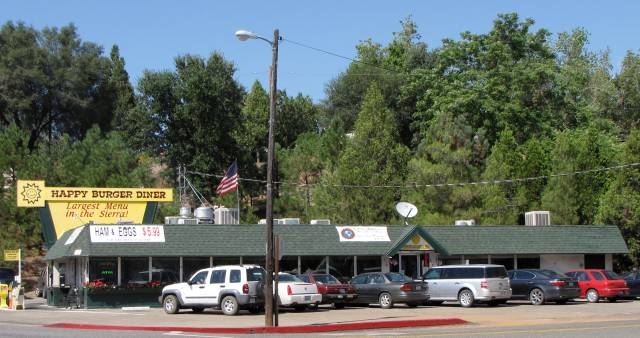 A hearty, inexpensive breakfast is consumed daily at the nearby Happy Burger Diner.

A short distance south, and a block west, on Bullion Street is the historic jail constructed in 1858 of granite blocks a foot (30.5 cm) thick.  The sturdy structure was designed to discourage escape and to protect prisoners from lynch mobs.

The 1892 fire which ravaged the structure occurred the same year my Father was born and I think of him.  This is part of the original Wild West. 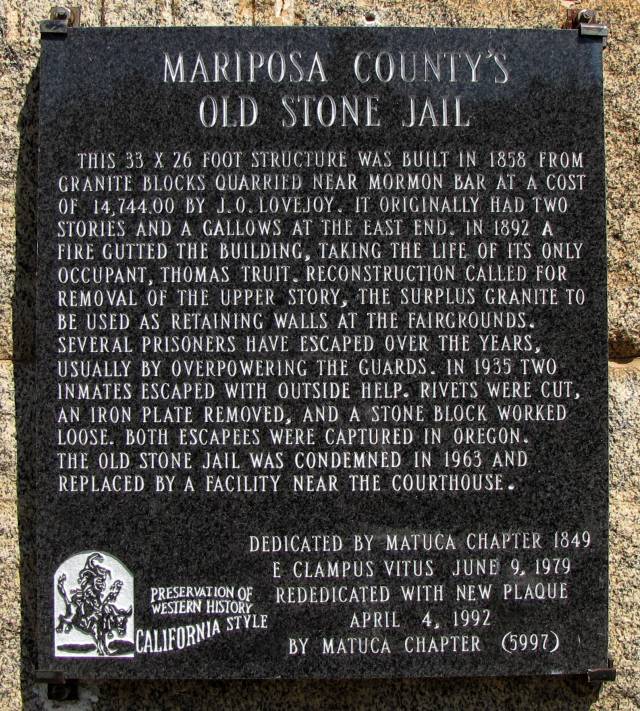 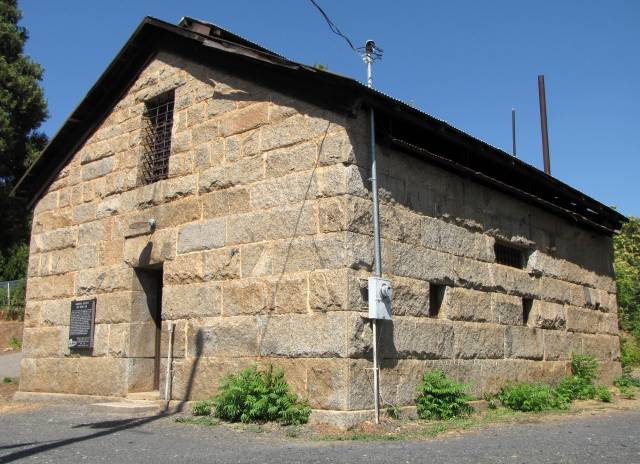 A few blocks north along Bullion Street, from the Old Stone Jail, is the stately and historical Mariposa County Courthouse, constructed in 1854.  It is the oldest county courthouse west of the Rockies which is still in continuous use. 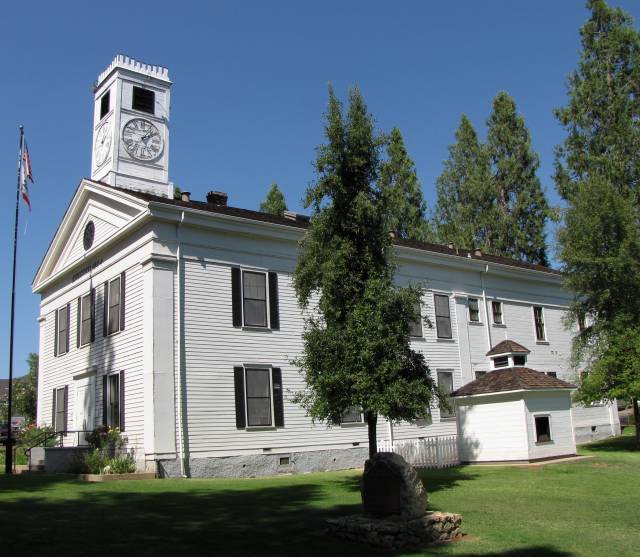 The most striking and famous addition to the Mariposa County Courthouse occurred in 1861 when the cupola and clock were installed.  The total cost, including freight, was $1,130.35.

The bell, which weighs 267 lbs, bears the mark of Naylor Vickers & Co., 1861 - Sheffield.  The clock has been humming along since then and is still wound by hand today. 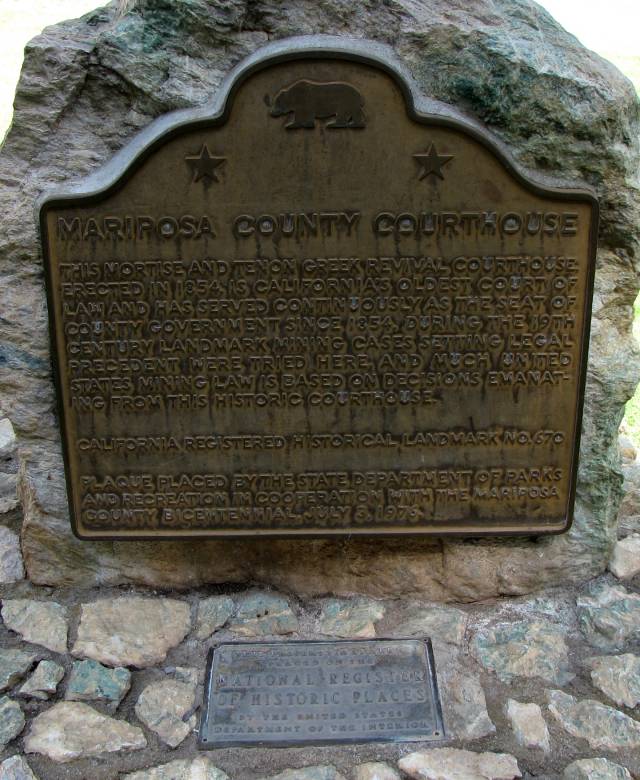 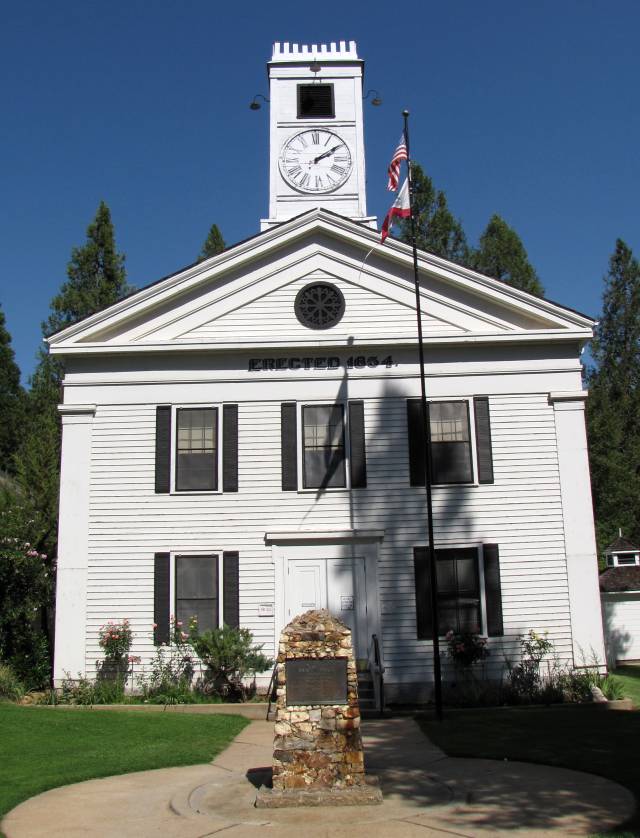 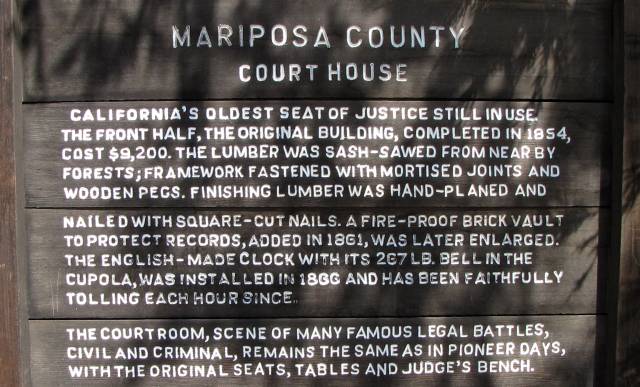 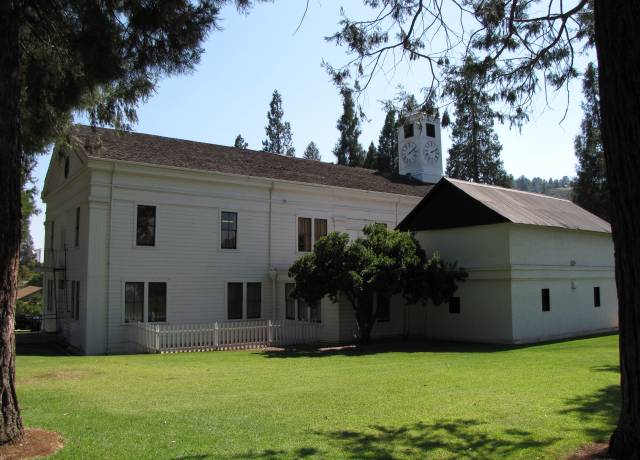 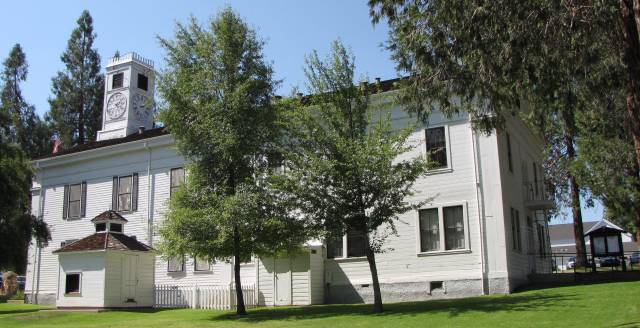 The vestibule on the south side covers the hand-dug well which supplies water to the courthouse.

Walking the back streets of Mariposa reveals a mixture of modern homes within an eclectic mixture of architectural styles, often with a Spanish influence and occasionally interrupted by derelict ruins which may date back to the early years of Mariposa. 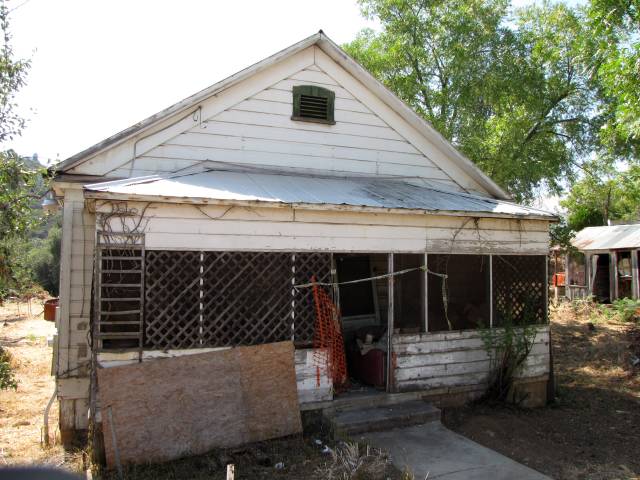 Just north of Mother Lode Lodge, on the main street of Mariposa, aka Hwy 140, aka Hwy 49, aka the Golden Chain Highway, is the Mariposa Museum and History Center on Jessie Street.

'A Community That Forgets Its Past Has No Future'.  Smithsonian Institute calls it "The Best Little Museum of Its Size West of the Mississippi".  An entire day could easily be spent here touring the exhibits.

The hour taken to investigate the outside displays exhausts the camera batteries and unfortunately spare batteries are located in the backpack back at the Mother Lode Lodge. 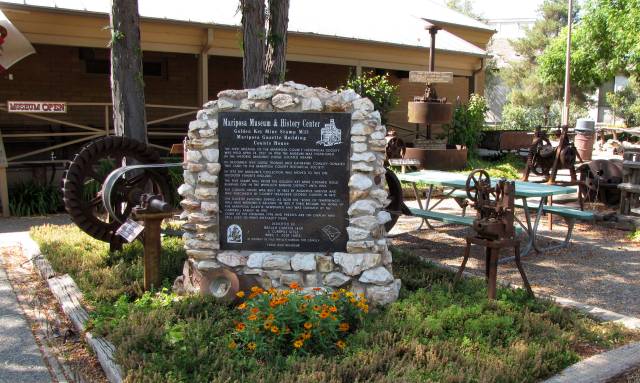 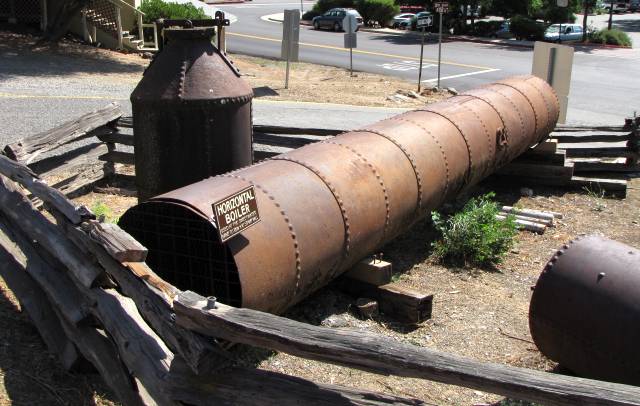 The Horizontal Boiler used at the Sweetwater Mine to run a 10 stamp mill. 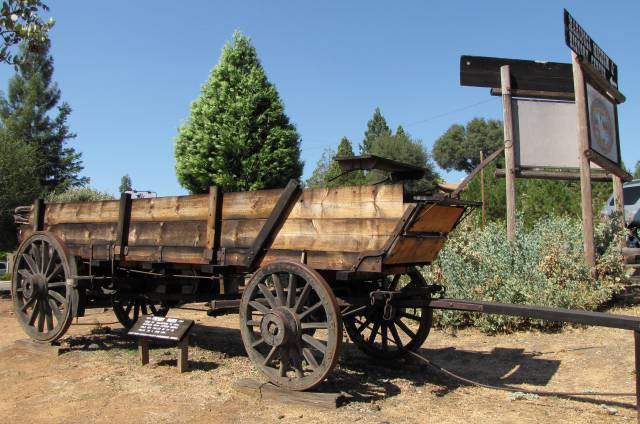 Freight Wagon used by Teamsters to haul supplies from Merced during Gold Era. Pulled by 14 - 16 mules on a jerk line. 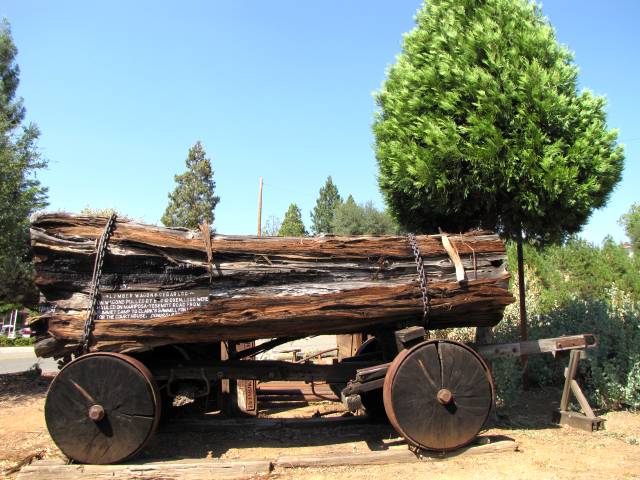 Lumber Wagon and Cedar Log pulled by 8 - 10 oxen. Logs hauled on Mariposa - Yosemite Road from Summet Camp to Clark's Sawmill to cut lumber for the Courthouse. 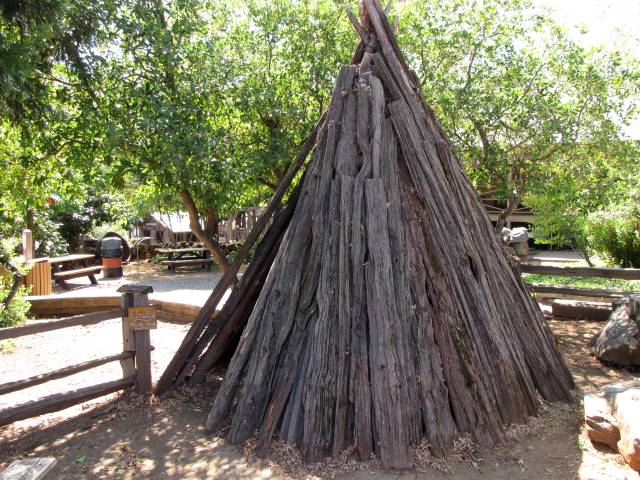 The main street of Mariposa is largely composed of well-preserved, early 20th century period architecture supplemented by new structures designed to blend in.  This charming place has character and exhibits pride in past and present.

At the south end of town, Mariposa Park offers a garden walk and a new monument to the 10th anniversary of September 11,  partially composed of steel from the World Trade Center in New York.

A quaint little store is tucked away below street level and guarded by trees.  With a name like 'Chocolate Soup', it is unlikely to remain a secret very long.

The core of town offers accommodation, a host of gift and souvenir shops and a wide-ranging variety of excellent places to dine.

Red blinds are pulled down in the afternoon to block the hot, California sun. 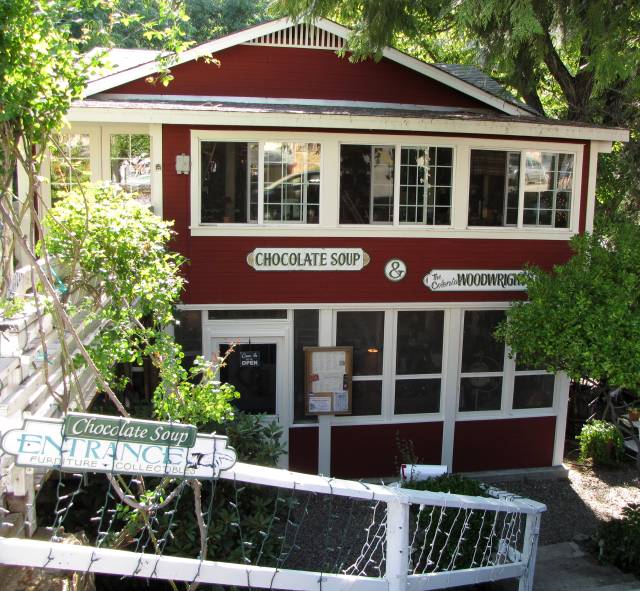 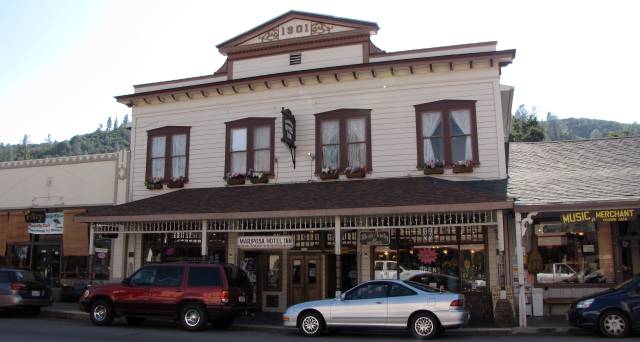 Very near accommodation at the Mother Lode Lodge there is an unassuming structure called the Charles Street Dinner House.  The outside is well camouflaged and generates little enthusiasm to enter.  Daily specials are scribbled on a tiny chalk board near the well-worn entrance.

The inside is an entirely different story.  Decor is clean, tidy, busy, historical and very comfortable.  The food is amazing.

The building was originally the dwelling and office of Dr. Kearney when he moved with his wife, Selena, in 1884, to become the town doctor and to raise their family.  Dr. Kearney died of pneumonia in 1901.

Now, this historic building is a fine restaurant owned by Executive-Chef, Ed Uebner, who purchased the property in 1980 when he brought his family to California from Chicago, Illinois.

His capable second-in-command since 2005 is Bay-Area-trained, gourmet Chef Clarence Tedrow.  The food is wonderful and the service is crisp, friendly, efficient and impressive.

The Charles Street Dinner House provides excellent ambiance for our final dinner in Mariposa and an outstanding dining experience, different but equally memorable to the Mono Inn Restaurant in Lee Vining, California, USA.

The Charles Street Dinner House on the corner just north of the Mariposa Hotel Inn. Excellent food and service. 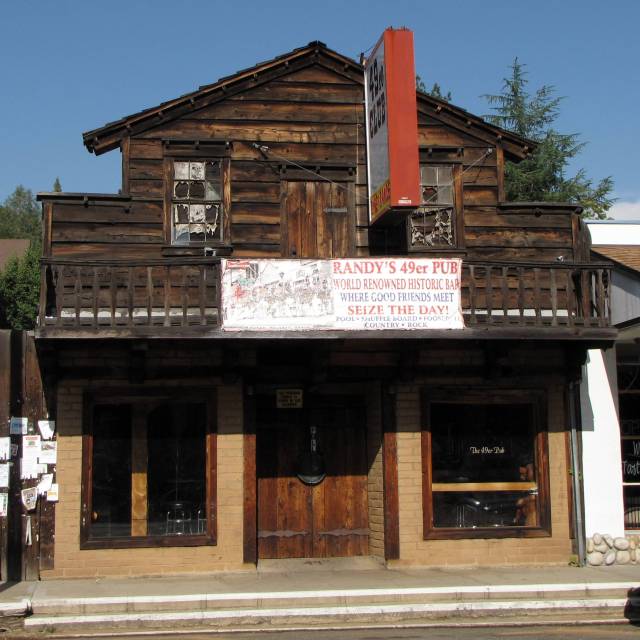 Hiking all day does not allow staying up late enough to participate in festivities at Randy's 49er Pub, but Bett's Gold Coin Sports Tavern becomes the chosen haunt on several occasions during the three day stay in Mariposa.

Our small, two-person table is just to the right, inside the entrance, at a shadow-box window with a sill about a foot in depth.  On the window sill is a pair of women's suede cowboy boots.  A tag tells they are Bett's boots.  The assumption is the boots add to the wall paintings and long arm gun collection as part of the owner's décor.

The square bar occupies the center of the large room, with bar stools along the counters.  Tables ring the exterior walls.  Bourbon and coke is efficiently served in a tall, cold glass.

Conversation reveals a very touching story.  Bette, the owner of this establishment, has a sister named Linda.  We learn Bette tragically lost her life in an accident several years ago.

Bette and Linda were very close and shared a dream to own a Mariposa meeting place in their home town of Mariposa.  Linda has fulfilled that dream on behalf of her sister.  Bette's presence is alive and well here.

The story tugs at my heart-strings.  It is a special place of honor, memory and rugged determination to keep a promise to a beloved sister and friend.  I have a daughter named Linda, and I think of her. 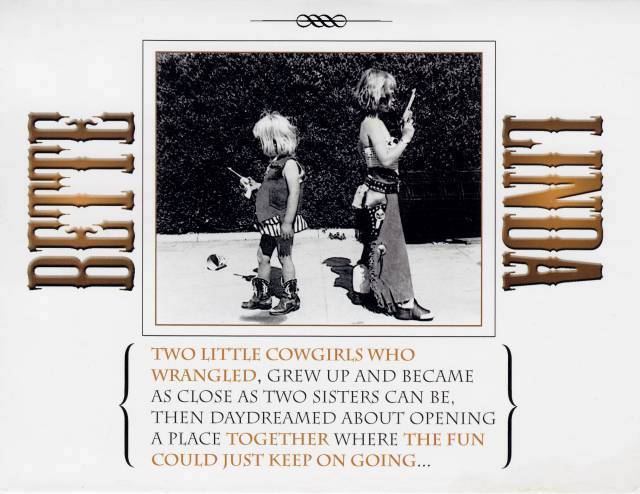 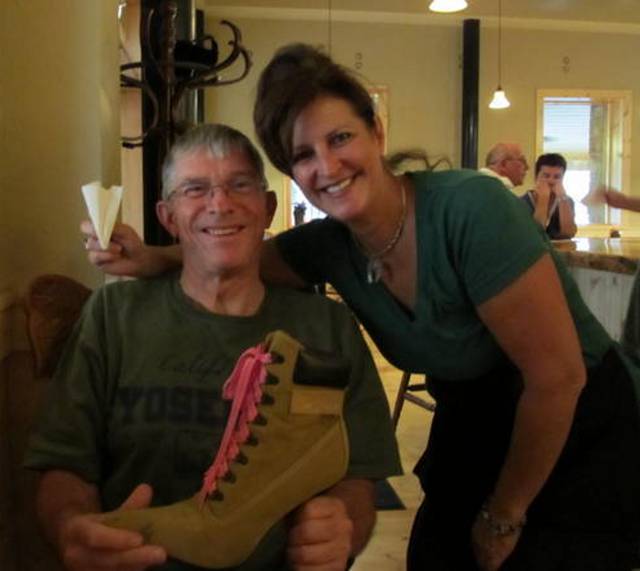 Every day the morning begins with breakfast followed by the lengthy drive along Hwy 140 from Mariposa, adjacent to the Merced River, through spectacular desert terrain, past the Merced River Recreation Area Visitor Center at Briceberg.

Eventually gaining elevation on tightly twisting, paved road leads through Winona Tunnel into Yosemite Valley.  Along the way, there was obviously a road long ago on the other side of Merced River.

Old, abandoned mining buildings and concrete bridge abutments line this ancient route which spurs the imagination and beckons for access and the experience of walking along the old road, now overgrown with vegetation and littered with fallen rock.

Occasionally we see someone walking the old road and wish we were doing the same.  Old and long abandoned mining buildings beckon. 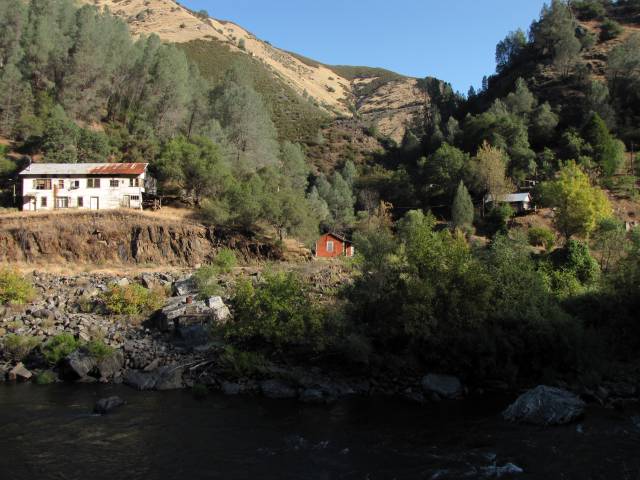 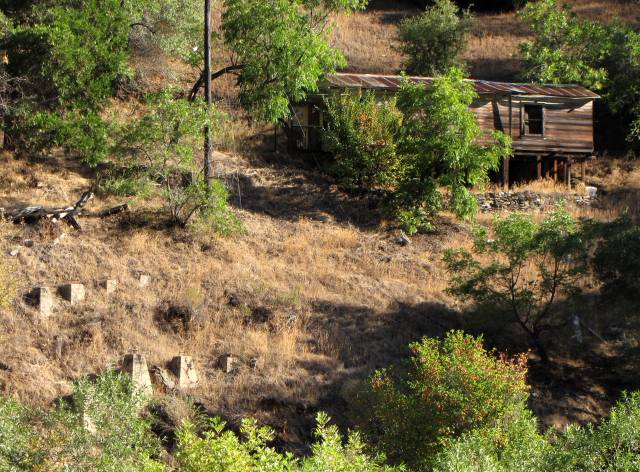 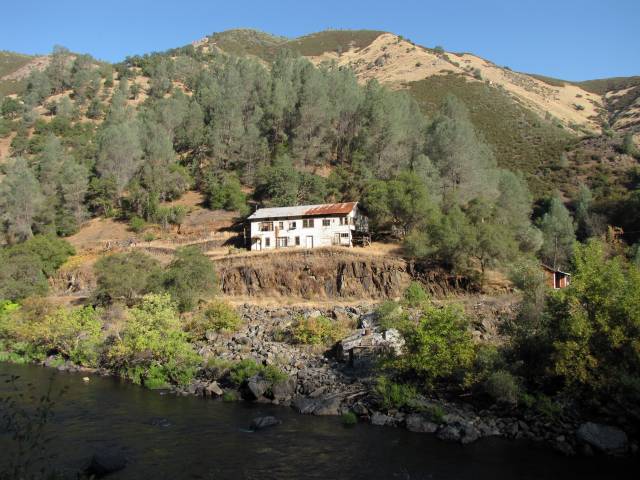 The Merced River Recreation Area Visitor Center is closed for the season and will not reopen until the following spring. 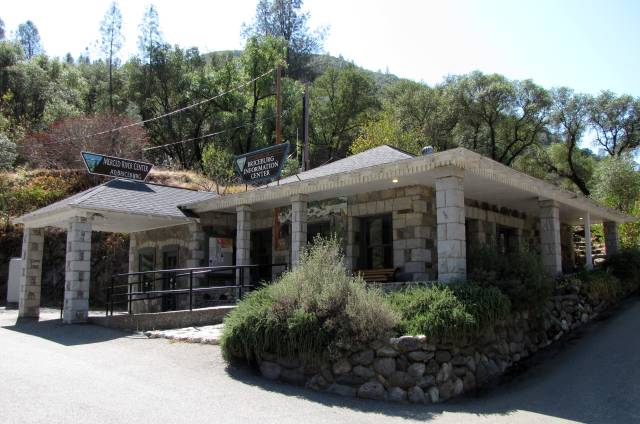 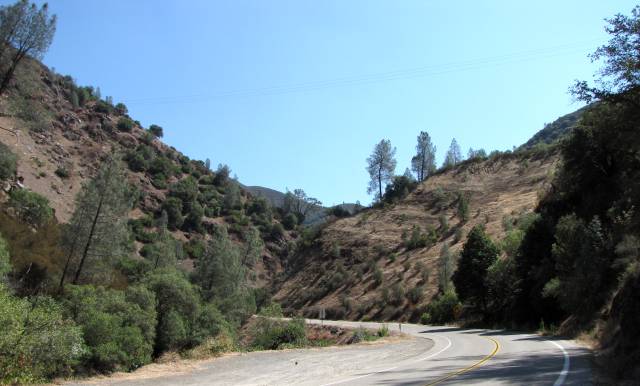 Mariposa is place of major historic proportion.  The opportunity to return again and build more rich memories will be welcome.

Photographs of derelict buildings used in this post are insufficiently balanced with photos of the far more prevalent, modern, meticulously maintained homes and gardens.

The photograph of the lovely young lady at Bett's Gold Coin Sports Tavern has been used without her permission.  She was kind and helpful and I believe she would approve and I will be forgiven.  It was she who shared the story of Linda's effort to honor the memory of her sister.  The experience will remain forever humbling.