Mirror Lake in Yosemite National Park is a short, easy hike which is lengthened substantially by exercising poor parking placement, shuttle bus ignorance and wandering around aimlessly in a desperate search for the trail-head.

On the other hand, all sorts of things which might not have seen otherwise and other trail-heads we will need soon, are discovered along with knowledge about how to get to them in a civilized way via shuttle bus.

The Mirror Lake Trailhead is at Shuttle Stop 17, for your reference. 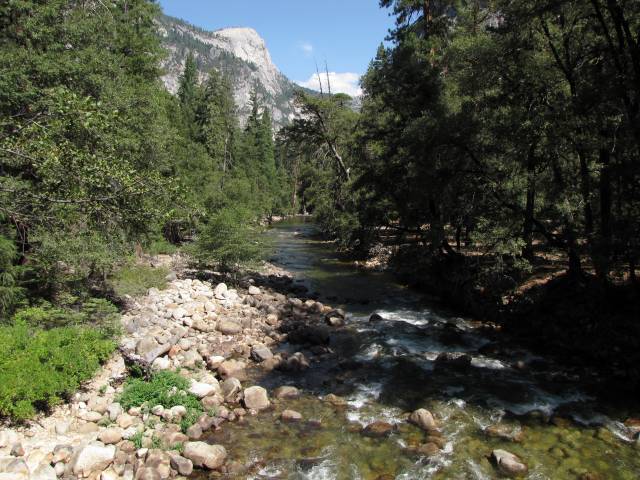 From Oakhurst, Hwy 40 leads onto frantic Southside Drive for Trailhead Parking at the east end of Yosemite Valley.

The ill-gained thought is to hike through the Upper Pines Campground, cross the Merced River and hike west to the trail-head for Mirror Lake at the junction of Tenaya Creek with the Merced River.

On the downside, the route requires a hike east to the bridge over the Merced River at Happy Isles Nature Center, then a hike west on the other side of the river, much farther than anticipated, to the Mirror Lake Trailhead.

The ill-conceived approach becomes longer than the actual hike.

Conversely there are beautiful sights that would otherwise remain unseen.  It's 'maintaining a positive attitude' training. 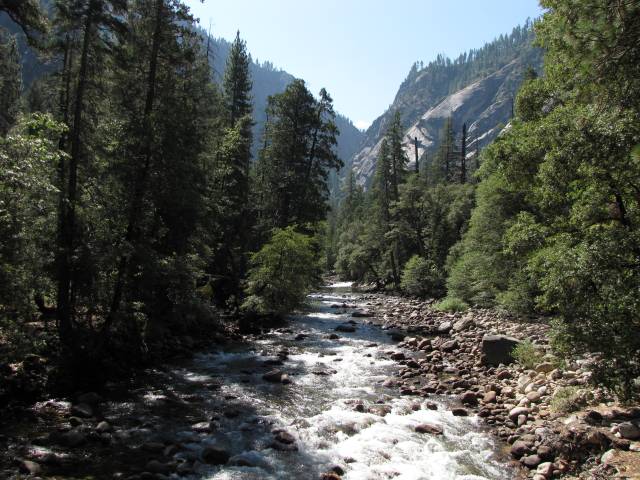 The Merced River at the East end of Yosemite Valley. 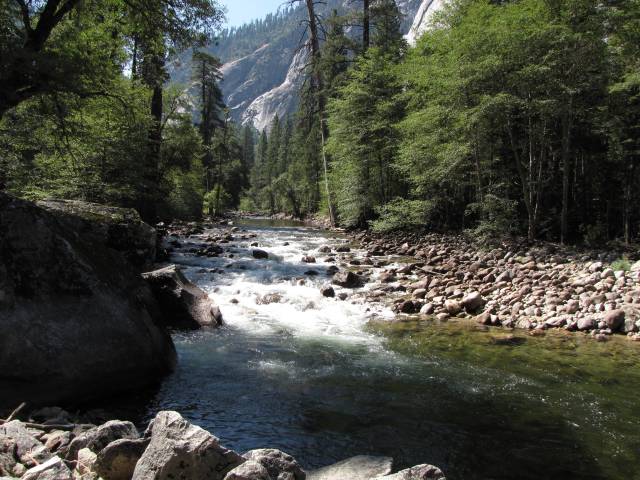 Finally, arrival at the Mirror Lake Trail-head begins the hike to Mirror Lake on a round trip of 2.0 miles (3¼ KM) with a modest elevation gain of about 200 ft (61 m).

Nearly anyone can do this easy hike and, by the time we get there, almost everyone is.  Maintaining a positive attitude at all times is easier to do in this incredibly beautiful place. 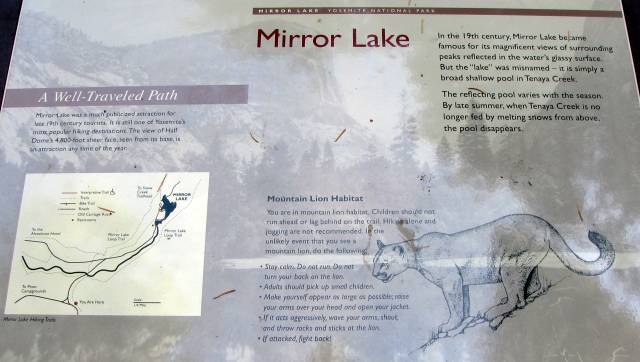 The trail on the paved road, through cedar, oak and fir forest, tracks the west side of Tenaya Creek which travels through a glacier created drainage and Tenaya Canyon, under the 4,700 ft (1,433 m) perpendicular face of Half Dome from headwaters at Tenaya Lake near Tioga Pass Road and visible from Olmsted Point.  Everything is beginning to fit together.

The short trail diversion to Indian Caves is regrettably bypassed.  Arrival at Mirror Lake is more like ponds in a meadow as sediment has filled the original basin over many decades. 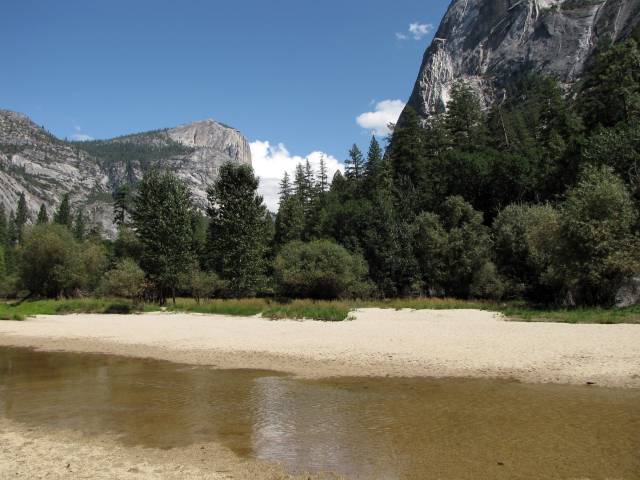 Interpretive plaques around Mirror Lake tell of earlier days when winter ice was harvested here and loads of sand were extracted for road maintenance and valley construction.

In earlier years, motor tours were conducted to Mirror Lake.  Now, it is possible to cycle part way. 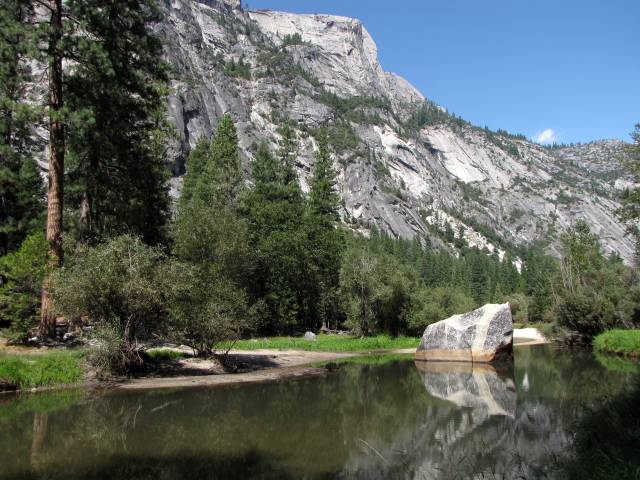 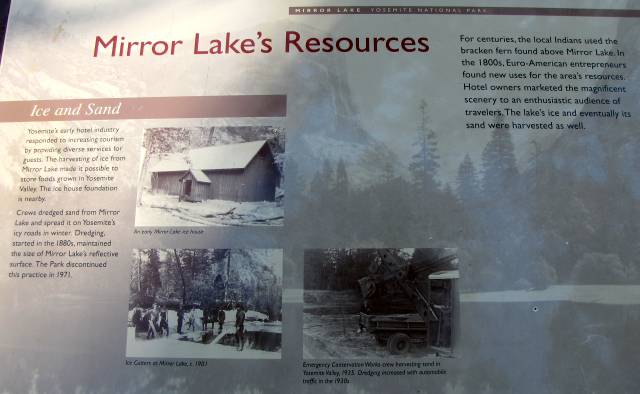 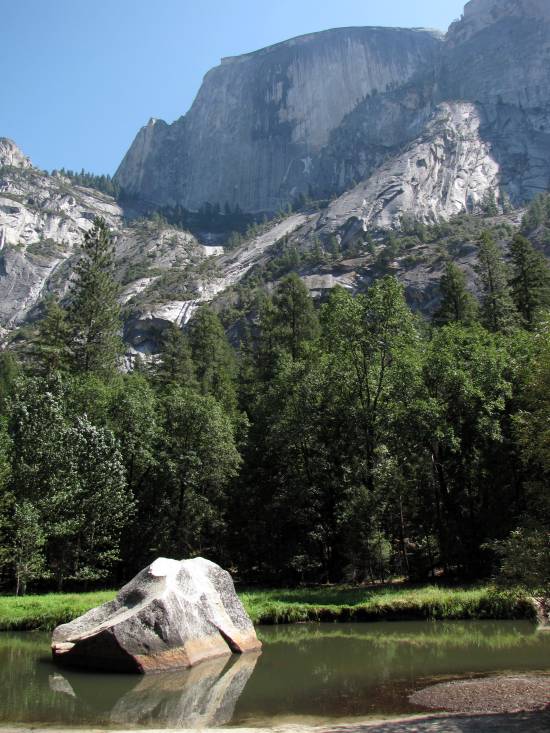 Near the beginning of the hike to Mirror Lake, a confusing sign indicates a massive rockfall, which occurred on March 28, 2009, blocks Tenaya Canyon at ¾ of a mile.

This appears to prevent using the footpath on the east side of Tenaya Creek to access Mirror Lake.  In reality, the rockfall is farther upstream, so at Mirror Lake, a scramble over boulders across Tenaya Creek allows return to the valley on this less busy and substantially more beautiful and less crowded route.

Given more time, the hike further upstream would have allowed photographing the massive rockfall beneath the sheer, near-vertical surface of Half Dome.

There are trails beyond the rockfall which can be accessed by unblocked trail along the west side of Tenaya Creek.  The rockfall can likely be traversed but Park's initiative reduces the risk for inexperienced hikers by discouraging access. 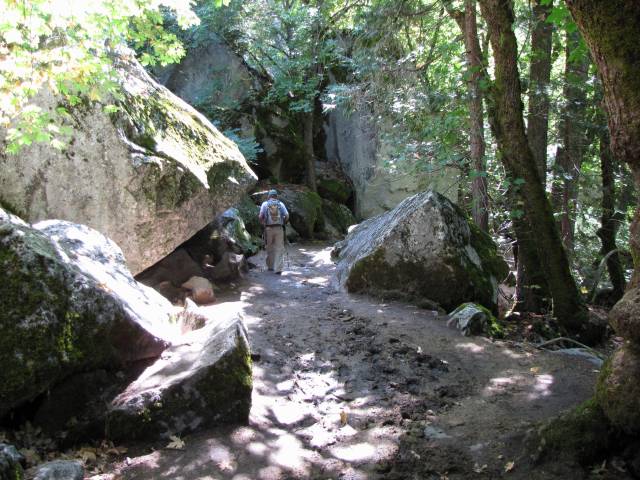 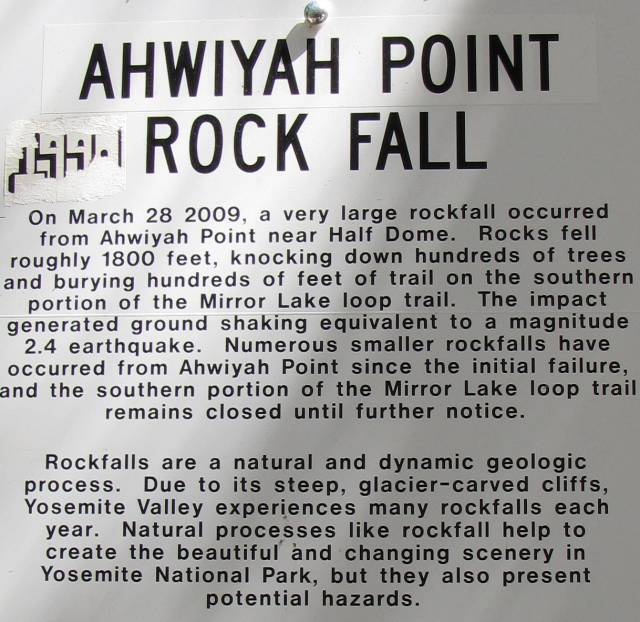 Back at the Mirror Lake trail-head, a shuttle bus provides efficient transportation to the Trailhead Parking area.

The drive back to Oakhurst on Hwy 140 south-west, proceeds out of Yosemite National Park, along the course of the Merced River, to the town of Mariposa.

The alternate route is another twisting, turning, roller coaster ride through sensational scenery and dramatic desert terrain.  At one point, there is a temporary bridge over the river to avoid a major rock slide which has completely blocked the highway for several hundred yards.

Each end of the diversion is controlled by timed lights that allow traffic to alternately travel one way over a single lane road on the opposite side of the river. 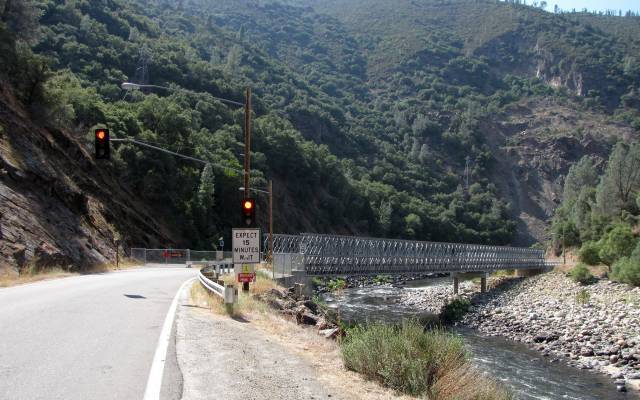 During the single lane detour, a spontaneous decision is made to acquire photographs of the rock slide on the other side of the river.

There is confidence a quick stop off the road to capture a few photographs, can be followed by a rapid return for the remainder of the route to get past the lights before they switch and allow traffic to come the opposite direction on the one way detour.

After parking midway along the detour, an attempt to set a new speed record for taking pictures is made before getting back in the car to find a stream of traffic coming the other way.

Pulling off the road as far as possible permits an attempt to look as friendly as possible while drivers in the opposite direction squeeze past with lips moving and fists shaking.  The somewhat humiliating experience works out OK and it is unlikely any of those people will be seen again. 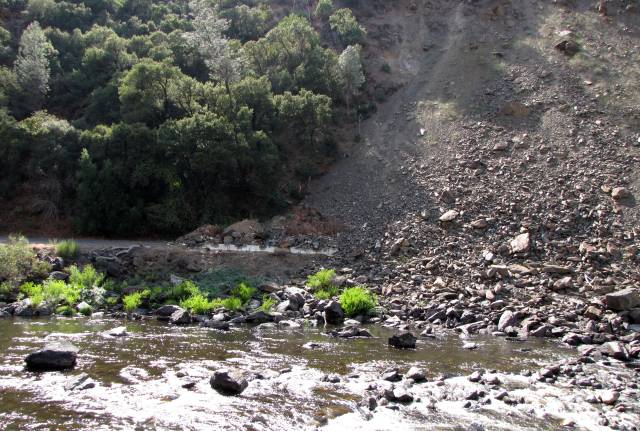 A hard-earned view of the rock slide which blocks the main road.

In Mariposa, reservations for the next few nights are acquired at the Mother Lode Lodge which will be the next and final staging location.

The drive south proceeds from Mariposa on Hwy 49 for our final nights stay in Oakhurst, California, USA.