There is little left of Georgetown beneath Mount Rundle near Canmore, Alberta, Canada but the history lingers.

The Canadian Anthracite Coal Company opened a new coal seam on the lower slopes of east Mount Rundle west of Canmore which will become the company town called Georgetown.

There is more than one way to get to the ghost town remnants of Georgetown.  The most popular route is from the trail-head at the Canmore Nordic Ski Centre.

Another option is hiking from Canmore along the Bow River and above the TransAlta-Rundle Hydro Plant.

Hiking the lower route along the Bow River will make the hike longer but will avoid the confusing maze of trails at the world-class Canmore Nordic Ski Centre.

Parking is convenient in the small Mineside Trailhead parking area on the Rundle side of the Bow River to hike the riverside trail west in a brisk, cold breeze towards the Hydro Plant.

A short diversion hike around the hydro station to the old, iron, Engine Bridge, built in the 1890's as a link in Canadian Pacific Railway's trans-continental rail line provides photos of the old, historic bridge.

Today it serves as a pedestrian bridge across the Bow River as part of Canmore's extensive and outstanding walking trail system.

The Engine Bridge in Canmore, Alberta, Canada with Ha Ling Peak and Mount Lawrence Grassi in the background.

Back at the Hydro Plant, the climb up the stairs rapidly solves the chill from the westerly breeze along the Bow River.

The short steep ascent leads to bluffs above the river and spectacular views over Canmore and the Bow Valley to mountains on the far side. 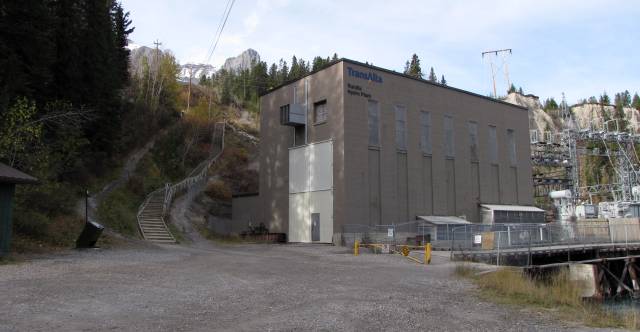 This area contains a labyrinth of trails.  The westerly route above the bluffs veers into forest and will arrive at Junction 41 where one of several trail options is clearly marked as the route to Georgetown. 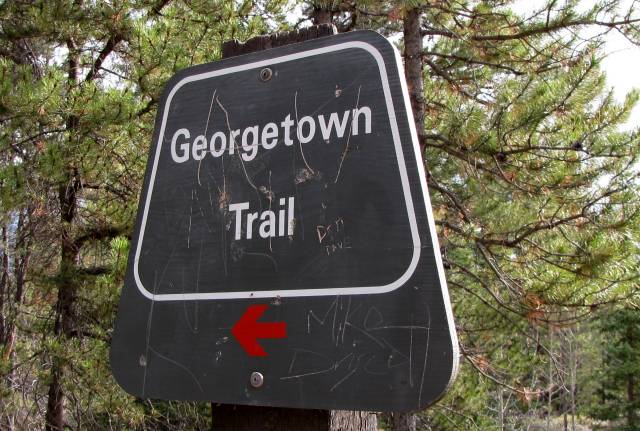 A second junction is again clearly marked and the trail begins a gentle downward slope on less a trail than a very fine road. 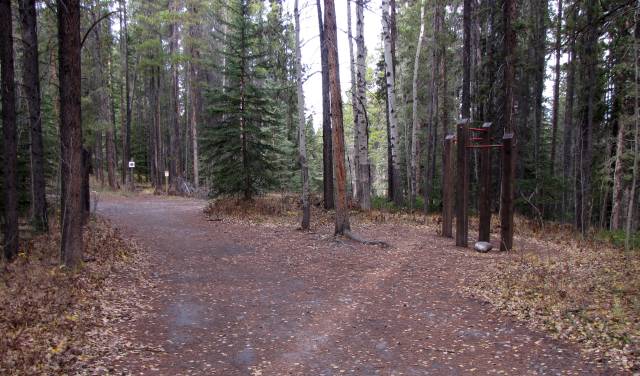 Alongside the road to Georgetown there are crystalline patches of ice on the shallow water of a nearly dry creek bed. 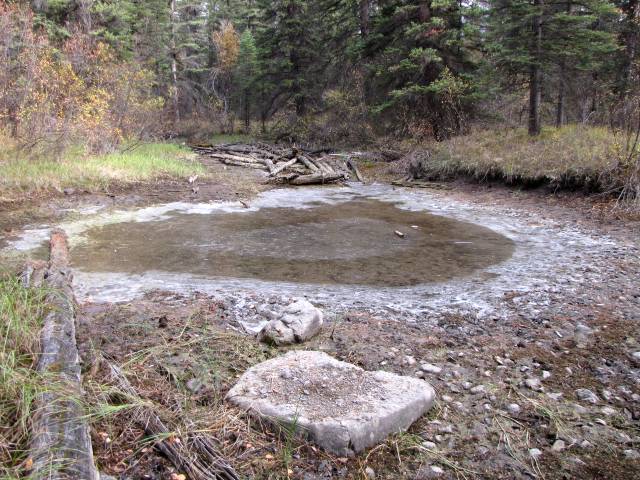 The surface of the road turns black from more-than-century-old coal and confirms Georgetown is not far away.

The tree-bordered trail opens into a clearing which was once the site of the small,  coal-mining town of Georgetown, established in 1912.

Population peaked around 200 people but Georgetown boasted a row of compact one or two bedroom homes, a bunk house for single men, a combination school and community center and a well-stocked company store with a post office.

The road arrives at a signed clearing with interpretive signs. 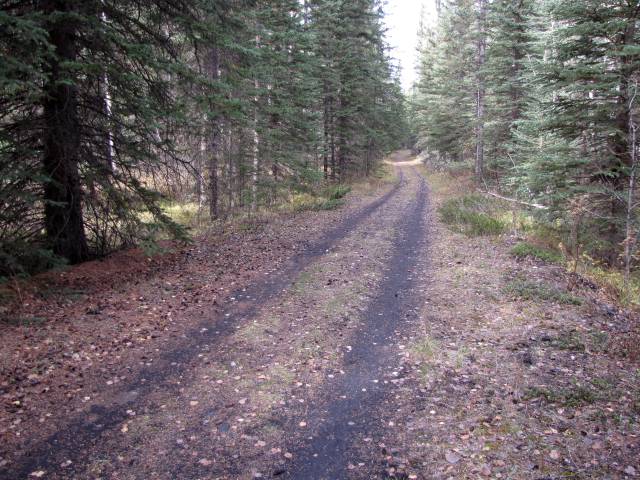 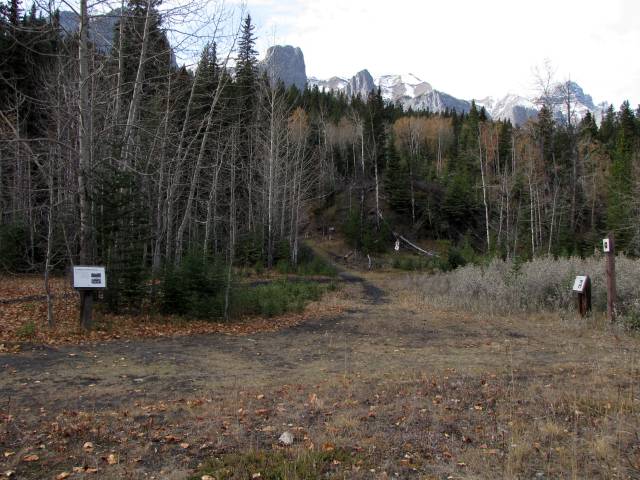 The path swings left and briefly climbs a hill to a flat spot with coal chute trails venturing right, left and straight ahead.

There are scattered remnants of debris.  A hike to the right loops back and up to join the black chute trail at the top of a large coal slag heap where two, sealed mine shafts are plugged with lumber debris. 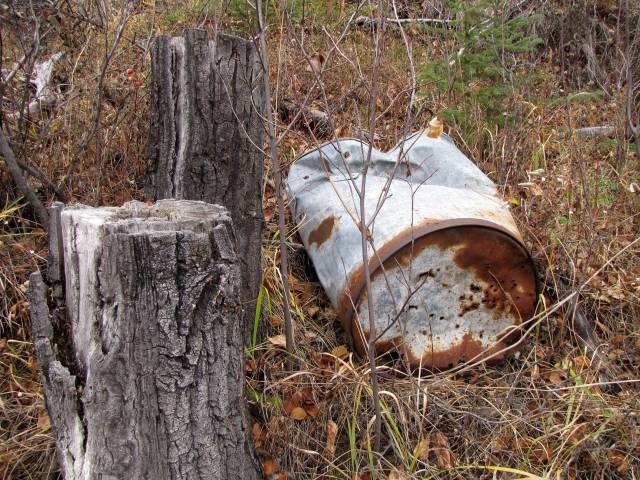 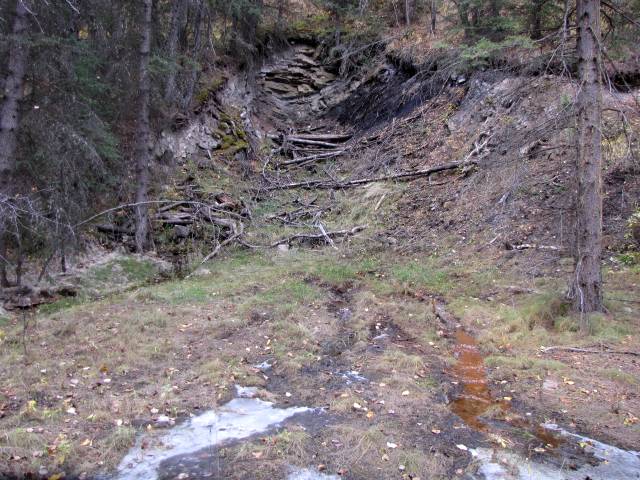 At the top of a large coal slag heap the old mining shafts are sealed and plugged with dead fall.

Working down the steep side of the old coal heap, there are remains of old, wooden coal chutes, and bits of cable and metal debris.

On a flat plateau at the bottom of the coal pile, piles of rotting lumber, rusty crushed fuel cans, an old winding drum and old moss-covered foundations are identifiable only by their flat surface and the rusted mounting bolts protruding through the moss.  What little remains is largely reclaimed. 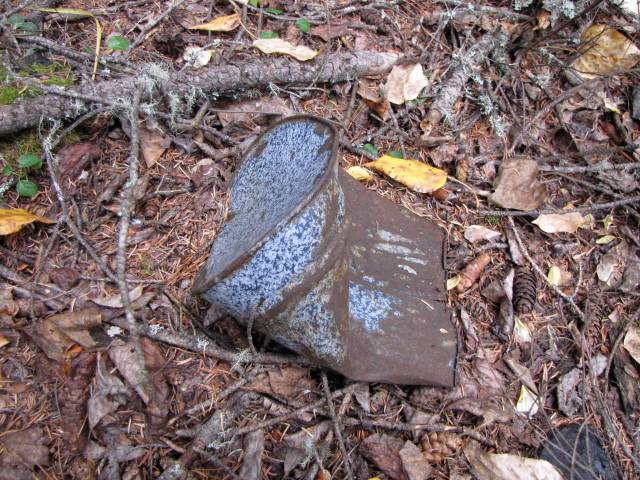 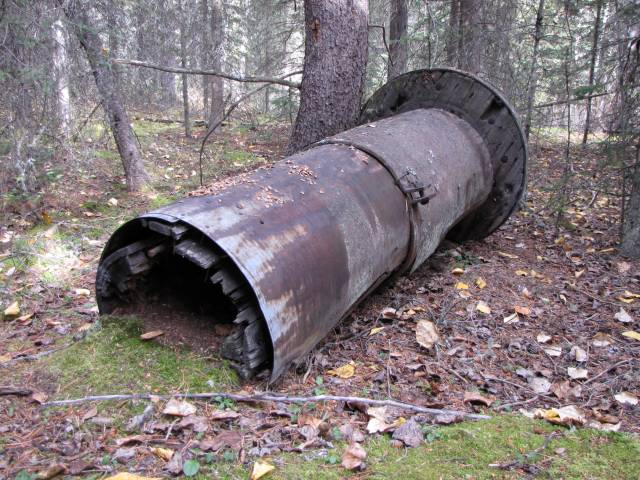 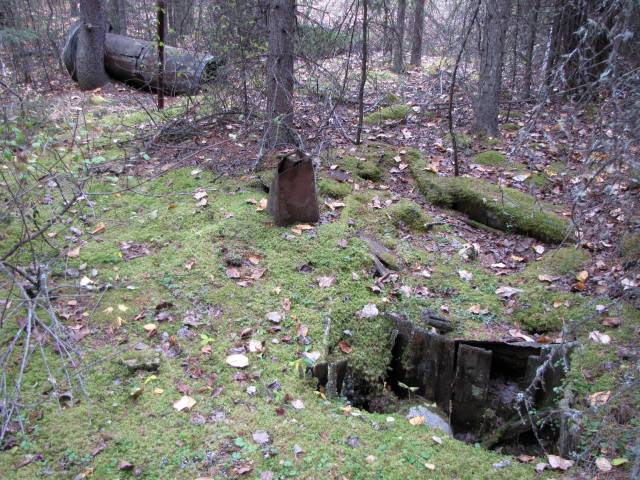 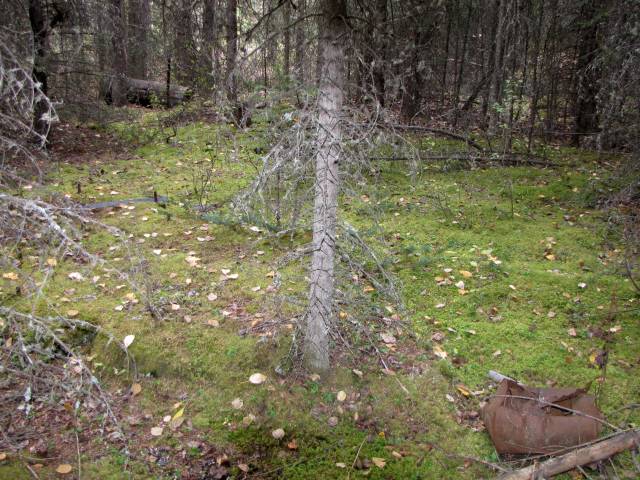 Back at the bottom of the hill a search around the underbrush discovers collapsed foundations at the edge of another road which was likely used to transport coal. 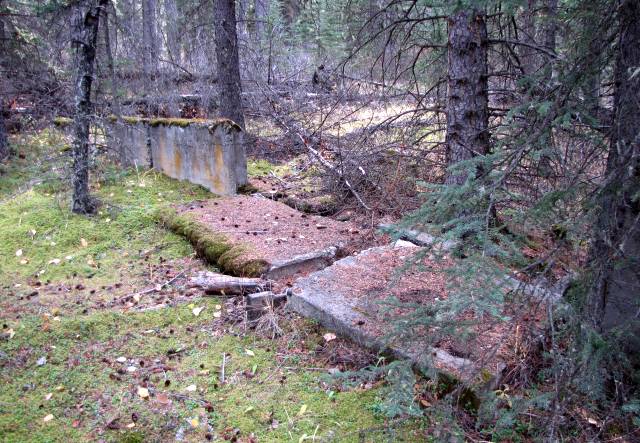 These old ruins are near the initial ascent to the Georgetown mining chutes, slag heaps and coal mining shafts.

Further descent to the clearing where the residential buildings once stood, reveals a stunning view of the mountains on the far side of the Bow River, under interesting cloud formations. 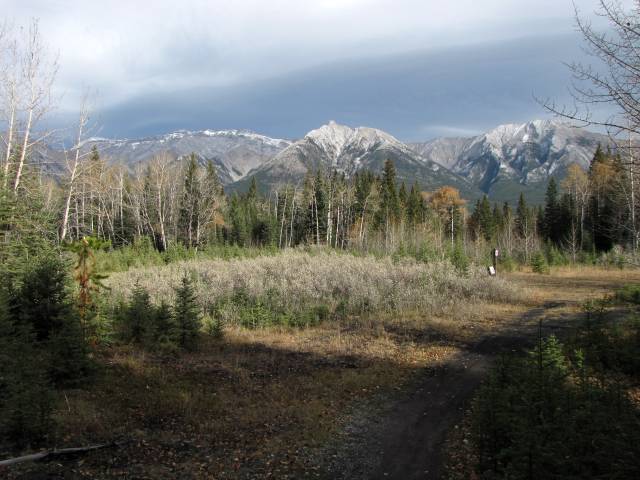 Using the clearing as a hub, a spoke search is executed in several directions, back and forth, but little is found beyond patches of coal and metal debris.

The hope was to discover a foundation or two, or the town dump, but nothing of consequence is found this day.  The only treasure is a photo of Mount Rundle rising above the old mine site. 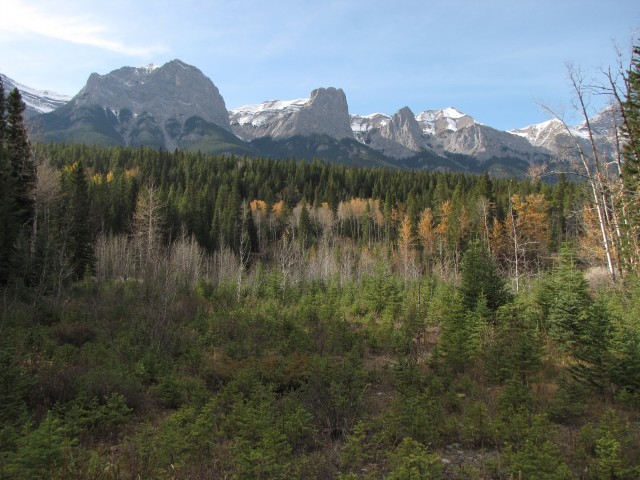 Off-trail through what appears to be a man-made channel, possibly an old rail line bordered by forest, two young deer are feeding in the woods.

My route passes them within 10 feet (3 m) and they watch me with their big, saucer eyes but exhibit no fear, just curiosity.  It is a nice moment.

The channel disintegrates into dead fall and an off trail traverse returns to the road for the return hike to Canmore via the same way taken in. 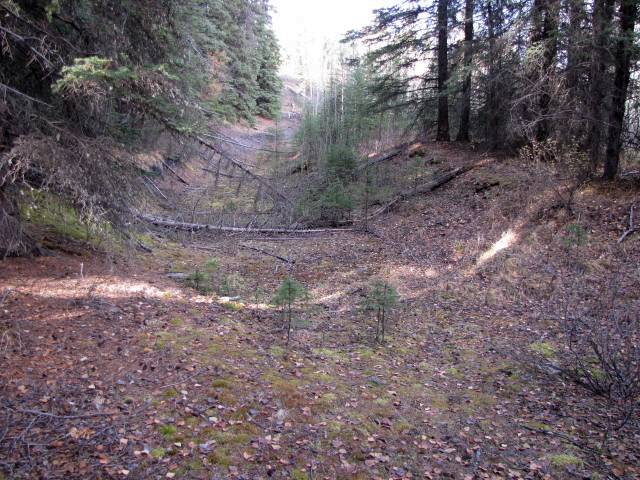 In 1914, near the beginning of the First World War, company funds and coal markets dwindled, resulting in the Georgetown Mine shutting down within 3 years of inception.

A few of the original miner's cabins were relocated to Canmore by sliding them over the ice of the Bow River.  Some of those homes still stand in Canmore today.  Miners moved to Canmore or to mining operations in the Drumheller area.

On the return hike there are wonderful views over the Bow Valley Corridor to familiar sun drenched mountains on the other side. 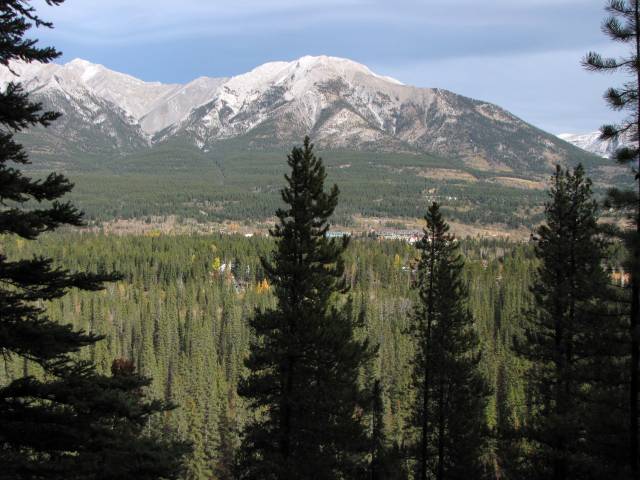 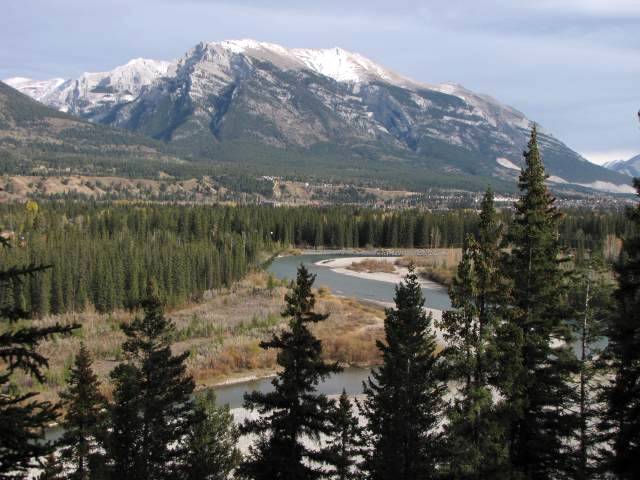 The Bow River at Canmore with Grotto Mountain behind. 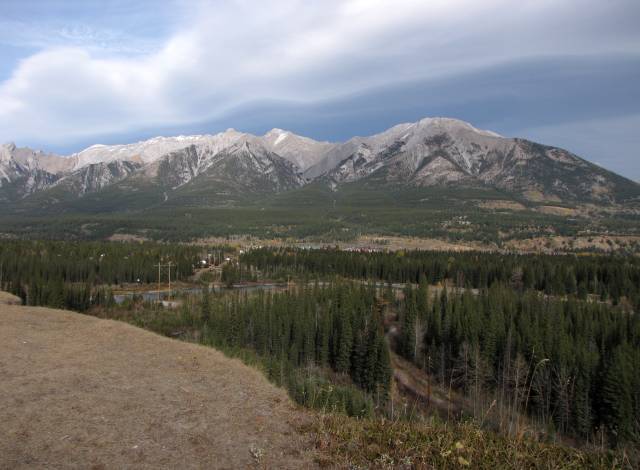 Views from bluffs above the hydro station - Mount Lady Macdonald. 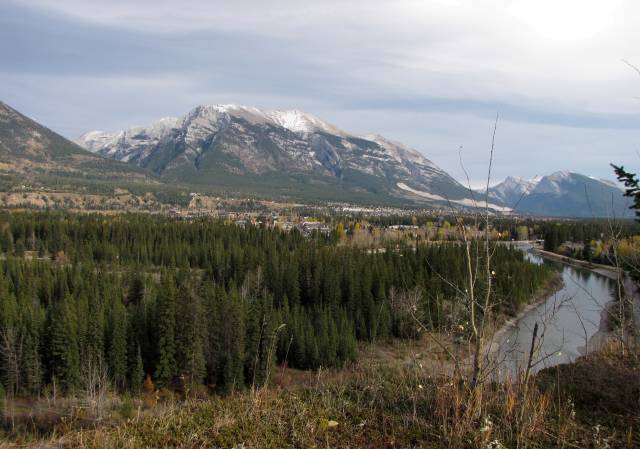 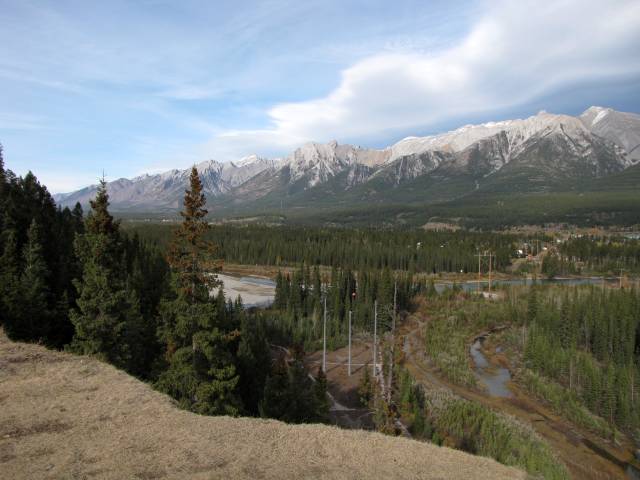 Returning to Canmore, autumn colors are accentuated by seeding shrubbery.

The hike to and from Georgetown is a very good experience on an easy-to-lose route so attention to trail signs is very important and a bit of advance research will be helpful. 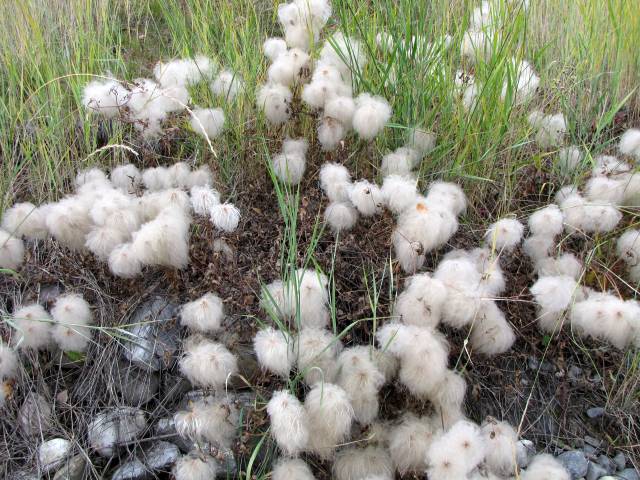