Bear’s Hump is a prominent feature, resembling the hump on the back of a Grizzly Bear, which looms over Waterton Village on the southwest face of 2,738 m (7,802 ft) Mount Crandell. 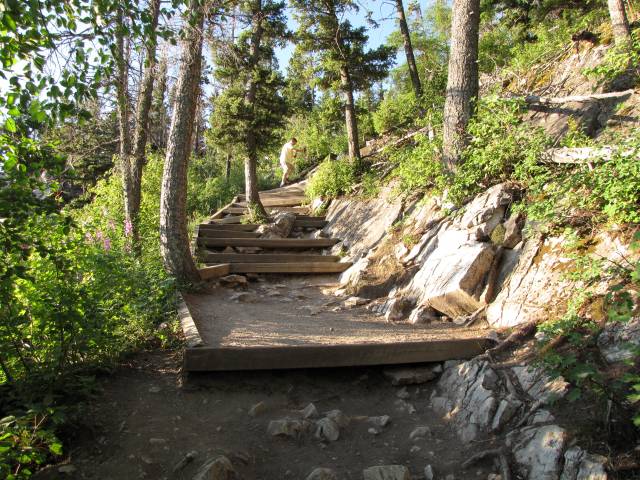 The Bear’s Hump trail is steep over a mainly rocky surface.

This hike is the first activity of the day.  Bear’s Hump is arguably the busiest hike in Waterton Lakes National Park and an early start may avoid the crowds.

There is no-one else on the trail and cool air is well-balanced by physical exertion and the yellow-orange glow of the rising sun.

The decision to hike very early provides the opportunity to look forward to a well-earned and hearty breakfast.

Within less than an hour arrival at the top of Bear’s Hump reveals the incredible surrounding views.

The trail ends here, at the top of Bear’s Hump, with the scramble route to the summit of Mount Crandell behind.

A view to the northeast across The Prince of Wales Hotel and the narrows separating Upper and Middle Waterton Lakes.

From the uppermost point of the rock outcropping, there is a phenomenal view over the top of the Prince of Wales Hotel above Emerald Bay and the narrows separating Upper Waterton Lake from Middle Waterton Lake.

Tiny Linnet Lake peeks out near the boat launch area on Middle Waterton Lake as  the rising sun creates an ethereal glow through morning mist.

The obligatory photos of triumph are taken from the top of Bear’s Hump.

The view south unfolds as we approach the edge of Bear’s Hump that overlooks Waterton Village.

The traditional victory acknowledgment of our successful hike to the top of Bear’s Hump.

At the top of Bear’s Hump in Waterton Lakes National Park, Alberta, Canada

At the edge of Bear’s Hump on Mount Crandell overlooking Waterton Townsite.

We may be the only humans present, but we are not alone.

Vistas from the edge of the Bear’s Hump cliff face are awe-inspiring and enhanced by early morning sun.  Time is taken to thoroughly enjoy the experience.

Looking over Waterton Village and down Upper Waterton Lake into Glacier National Park in Montana, USA

The small marina nestles on the shore of Emerald Bay as morning sun accentuates bands of mist on east shore mountains.

To the northeast, tiny Linnet Lake peeks into view near the Prince of Wales Hotel with Middle and Lower Waterton Lakes behind.

A final view over Waterton Village before we leave Bear’s Hump to return to the trailhead.

The return hike from Bear’s Hump is via the same route used for ascent.

A view to the northeast from partway down the Bear’s Hump trail in Waterton Lakes National Park, Alberta, Canada.

Back at the Bear’s Hump trailhead, then off to a great breakfast at Zum’s Eatery in Waterton Village.

On departure from Bear’s Hump, a couple with their dog take our place and on the way down less than a dozen people are hiking to the top.  By noon the trail will be very busy in both directions.

Bear’s Hump overlook will be crowded throughout the afternoon and evening in spite of the heat on the rock.

A relaxed and excellent breakfast at Zum’s Eatery on Waterton Avenue is thoroughly enjoyable before driving to Cameron Lake at the end of the Akamina Parkway, otherwise known as Cameron Lake Road.

No comments to show.