This hike to Harvey Pass carries on  from Bourgeau Lake in Banff National Park, Alberta, Canada.

The more aggressive extension to the Bourgeau Lake hike will add 2.5 kilometres (1⅝ miles) one way and 295 meters (970 feet) of elevation for a total return distance, from the trail-head at the TransCanada Highway, of 20 kilometers (12½ miles) and total gross elevation of 1,005 meters (3,297 feet).

The trail along the north shore of Bourgeau Lake gradually veers through and past wetland ponds to the other end of the lake where a trail to the left leads to the lakeshore.

Continuing straight to Harvey Pass invokes a fairly steep ascent, first on rocky trail past a spectacular, roaring waterfall and then on scree towards the 'notch' above.

To the right is a herd of mountain sheep are grazing on a grassy slope a substantial distance away on scree slopes a thousand vertical feet above.  Among them are the very cute and young, learning survival skills from parents who are in the final stages of molting from winter coats.

Unknown at this time, the seemingly common herd of mountain sheep wildlife encounter will develop into an amazing experience.

Preparing mentally for the steep scree climb from the far end of Bourgeau Lake to the notch. Note the trail to Bourgeau Lake. 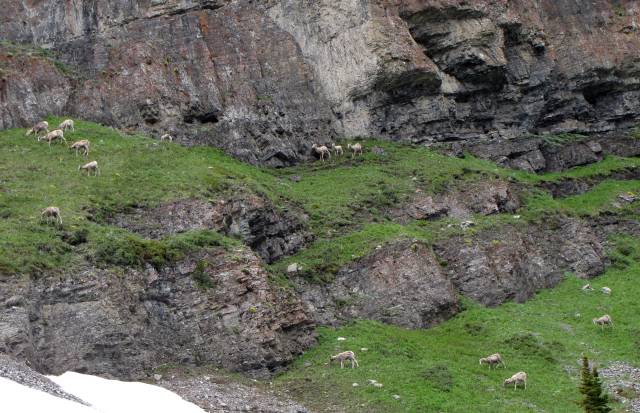 The good but steep trail over scree passes up and around cascading and twisting white water falling on its way to Bourgeau Lake.

Rocky trail is periodically punctuated by steep snow slopes which requires punching feet into the snow for good grip.

The hike proceeds past the notch into a mecca of very beautiful vistas of mountain summits, snow fields, cornices, rock, ice and rushing water in a massive mountain-surrounded bowl.  WOW!

At the notch, the trail levels and tracks the shoreline of a tiny but very beautiful, shallow lake.

As the hike proceeds past the notch, 25 meters to the right, the respectable herd of mountain sheep, which have been virtually invisible both descending and approaching the trail position, begin to maintain the same pace and walk alongside.

Over the past 2 kilometers, the herd have gradually descended from higher slopes to match trail elevation and have now become adjacent hiking partners.  No fear is exchanged.

Curiosity is shared, particularly from the young.  In all my years in the mountains, I have never experienced this particularly incredible and very special wildlife event.

Past the tiny, shallow lake the view back is impressive on the turn left, prior to hopping over a small creek to take in the expansive view of cornices along mountain ridges and summits.

The herd of mountain sheep stay to graze.

In the bowl, surrounded by the peaks of surrounding mountains, there are several lakes including Harvey Lake and a brilliant blue, melt pond.  The final ascent to Harvey Pass is a short, stiff climb on scree made unstable by snow melt.

At the top there are two ridges separated by an incredibly beautiful and nearly frozen pond, which likely disappears for a short span in late summer or fall each year.

The hike around the left side of the blue, ice filled pond to surrounding fabulous vistas reveals expansive views from the far side of Harvey Pass and skies of heavy weather slowly moving towards the lofty position.

The first ridge of Harvey Pass is clearly visible to the left. It is a short, steep climb away.

There are easily achievable mountain summits on another, longer day to either side of Harvey Pass

Following a brief rest break to enjoy the spectacle, to relax and wander about for photos, and to replenish with food and water, the retreat begins by retracing steps back to the trail-head on 10 kilometers (6¼ miles) of downhill trail.

Wildflowers unique to higher elevations adorn the edges of pathways 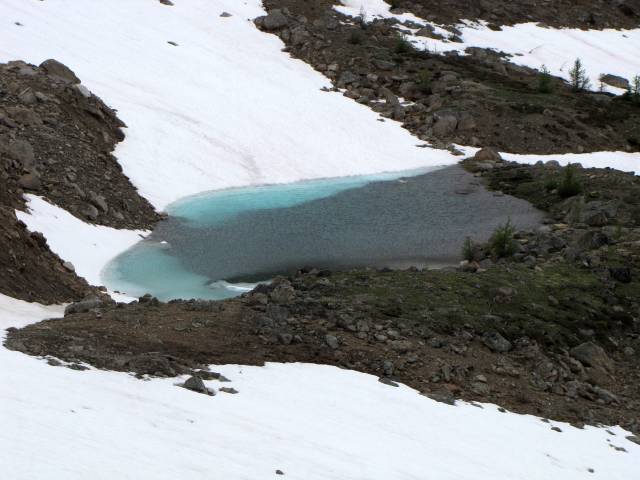 A view of the notch from directly above the shallow lake - spectacular!

A hoary marmot, still in its winter coat.

The hike down the steep slope requires cautious steps over scree, and occasionally snow, but views from a completely different perspective are fresh and energizing on the down trek.

The chop on the surface of the water of the shallow lake at the notch, confirms the breeze generated by incoming heavy weather.

Approaching Bourgeau Lake on the descent

The hike down through forest offers one view of the Bow River at the bottom of Bow Valley near the trail-head at the TransCanada Highway.

A view towards our destination at the Bow River beside the trail-head on the TransCanada Highway.

At the parking area, heavy rain begins.  The drive east proceeds through Banff National Park and past Canmore to Calgary under relatively clear skies until passing Calaway Park where extremely dark cloud over Calgary generates a rainbow on the approach to the city.

As the drive into the intense storm continues, the rainbow takes on an unusually dramatic brilliance and at the Calgary city limits the car seems to be chasing the rainbow which appears to passing over rooftops on either side until we seem to pass under it.

In the rear view mirror a funnel cloud is forming up in the storm behind and around us.  Gear is transferred in heavy rain and a hail storm.  Only in Calgary in mid-July.

One day, all seasons, on an overall exceptionally good day.