The forecast is unattractive but mountain weather follows no rules.  So, the early morning drive west, from Calgary, Alberta on the TransCanada Highway proceeds through isolated storms into progressively improving weather.  Mountains are mystically shrouded by slow motion cloud.

By arrival time at the parking area for the clearly marked Bourgeau Lake trail-head just 2.8 KMs (1¾ miles) past the exit to Sunshine Village,  the sky is overcast but there is no rain.

Sunshine Village hosts the trail-head to Healy Pass and connecting trails.  The clouds have an intimidating posture, however, the planned hike shall proceed with the expectation rain gear will likely be employed.

Nothing ventured: nothing gained.  No guts: no glory. 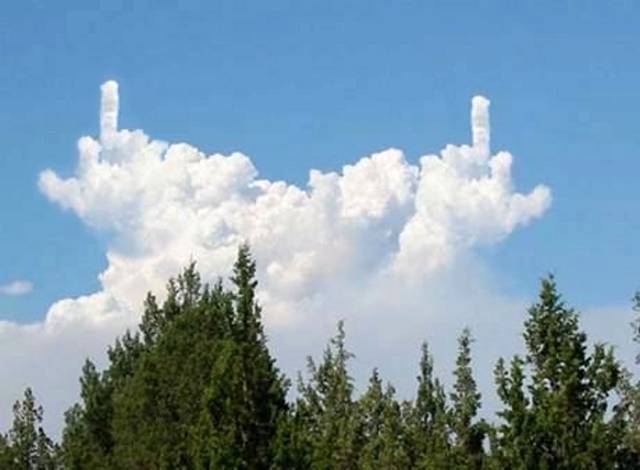 Clouds in the distance have an intimidating appearance

At the trail-head, the entrance proceeds past chain link fence on three metal steps up, through a self-closing gate, and down to the trail.  This access mechanism keeps animals away from traffic on the nearby TransCanada Highway. 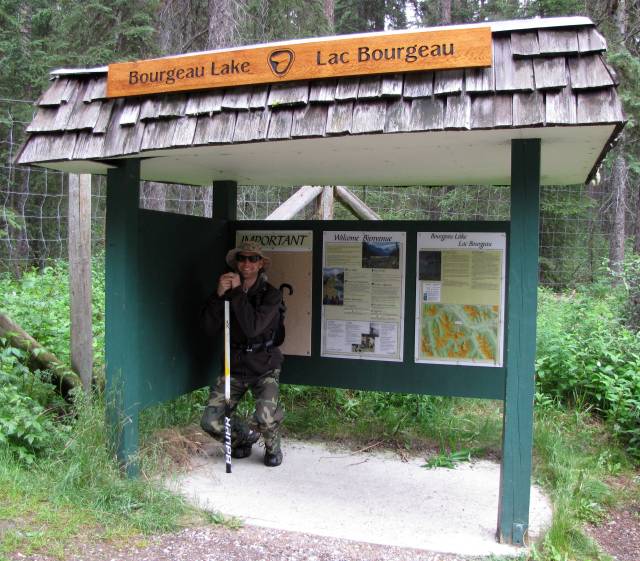 At the customary trail-head kiosk containing a map and trail information.

Recent precipitation has left the excellent, moss-bordered trail easy on the feet and amazingly aromatic.

The hike tracks above the Wolverine River and intervening dense forest keeps the river occasionally heard and seldom seen.

There are periodic views of adjacent mountains with summits shrouded in mist gradually lifting as the sun reluctantly warms the day.

Limestone layers in trail-side mountains reveal solution caves as mist in the valley, and at the summit, gradually drift skyward

At 3.7 KMs (2¹⁄₃ miles) we cross a newly replaced wooden bridge over the white water of a tributary feeding Wolverine River.

A newly constructed wooden bridge over a tributary of Wolverine River 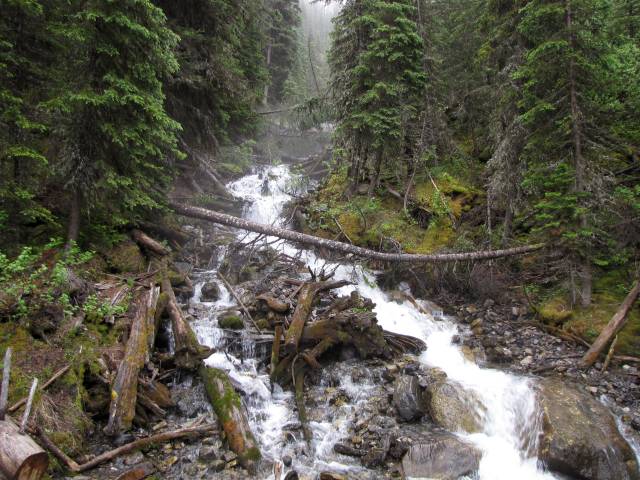 The loud and powerful white water of a Wolverine River tributary along the trail to Bourgeau Lake in Banff National Park, Alberta, Canada

Along the trail there are waterfalls on both sides of the valley.

A large avalanche chute is easily identified by a forest break, damaged and stunted trees, and dead fall swept up the opposite side of the valley bottom. 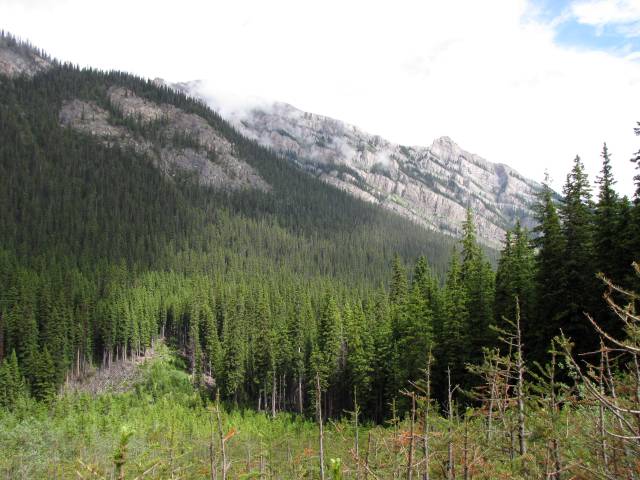 Checking out a small, gentle waterfall down the mountain-side which creates a snow bridge under a sun-protected drift

The interior of the snow bridge is large enough to crawl into for a fascinating photo. There is light at the end of the tunnel.

At the 5.5 KM (3⅜ mile) mark, the approach and crossing of the Wolverine River is complicated by the bridge being taken out by voluminous, tumbling water but the rock-bundle base remains largely intact so jumping across keeps feet relatively dry.

The crossing on the return hike may be complicated by increased water flow from melt above as the day warms.

Later in the season, when water flow subsides, the crossing will be easier even if the bridge is not replaced.

Cascading water falls above the bridge and huge snow bridges soon conceal the flow below the crossing location. 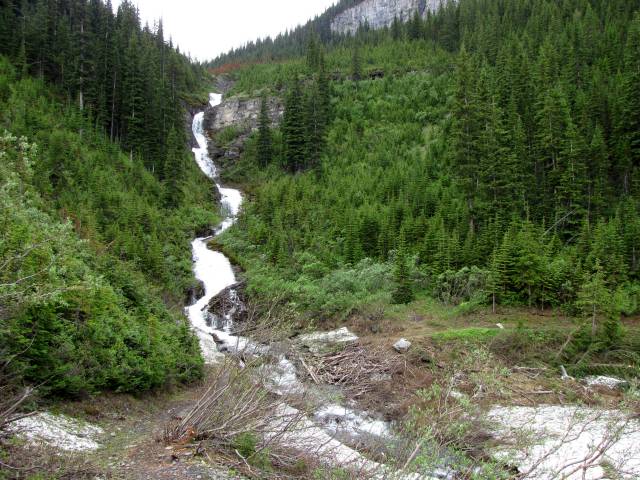 On the far side of Wolverine River, the rocky trail steepens over switchbacks.  As elevation gain becomes more aggressive, phenomenal views begin to unfold.

A view back as altitude is gained above the valley just hiked through.

A kilometer (⅝ mile) later, the trail straightens and levels as the hike proceeds into a narrowing valley beneath surrounding mountains on the final approach to Bourgeau Lake.

Sand pathways, constructed through a brief wetland area, keep the feet dry and protect this delicate and quite beautiful environment.

The rocky trail straightens and flattens on the approach to Bourgeau Lake in Banff National Park, Alberta, Canada 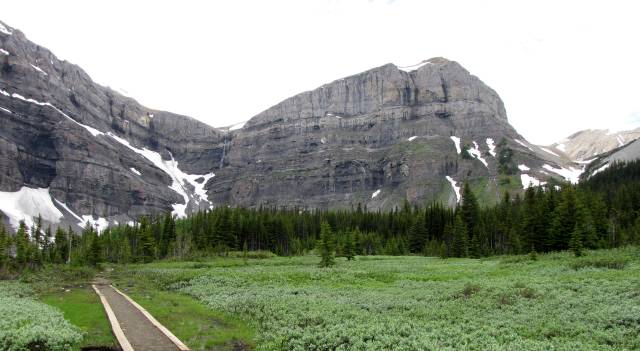 Visually stunning Bourgeau Lake pops into view from forest at the trail junction.

A quick hop on partially submerged rocks across the lake's outflow onto scree rockfall navigates near two very large enticing boulders which will serve as an ideal location for lunch.

Two chipmunks scurry back and forth to share lunch.  The beauty of Bourgeau Lake motivates a continuance to Harvey Pass above but this extension will be covered in a separate, subsequent post.

Bourgeau Lake is named after Eugene Bourgeau who was a French-born botanist who served with the Palliser Expedition in 1857 - 1859.

The beauty of the location is stunning.  Photographs cannot do justice to the overall experience. 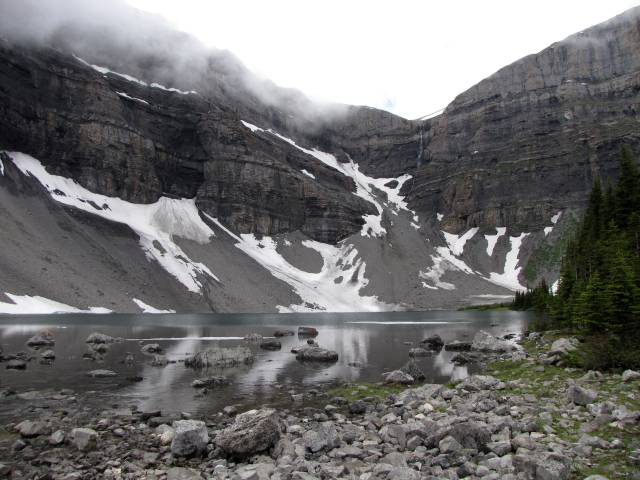 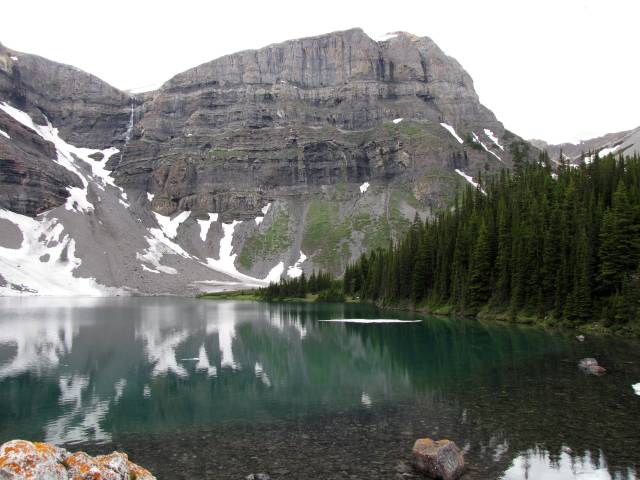 Bourgeau Lake and the access to Harvey Pass in the background - Banff National Park, Alberta, Canada