The Colonel’s Cabin is a landmark across Kananaskis Trail from Barrier Lake in Kananaskis Country, Alberta, Canada.

There is a large green sign not much more than a stones throw pass the entrance to Barrier Dam on the opposite side of Kananaskis Trail.

Today, following the hike into Jewell Falls, there is sufficient time remaining in the day to revisit, refresh the memory and wander around a bit.

Turning into the Field Station will find a number of buildings on this sub campus of the University of Calgary called the Biogeoscience Institute, Barrier Lake Field Station.  There are lodges, classrooms and staff residential buildings and a laboratory building.

Also, on the way in, a sign near the entrance says ‘Colonel’s Cabin’.  This exhibit is worth a look to be introduced to the Colonel’s Cabin and Guard Tower # 8.  More than 60 years ago, this site was the location of a Second World War Prisoner of War Camp.  There are sketchy remnants and fascinating stories. 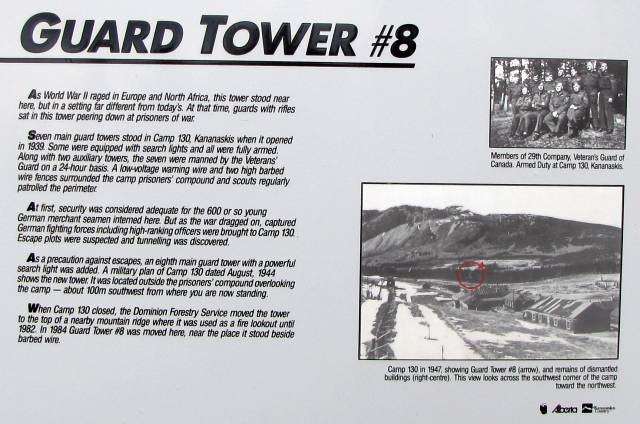 Historic Guard Tower # 8 could use a new coat of paint.

Adjacent to parking is Guard Tower # 8, used at this camp during World War II, then relocated to McConnell Ridge, overlooking Barrier Lake, to be used as a fire lookout before returning to its present location where the historic building now rests perpetually as a permanent physical reminder of fascinating history.

About 650 prisoners were temporarily staged here.

Did you know that 10,000 prisoners of war were held on the tract of land near the corner of the TransCanada Highway # 1 and Kananaskis Trail (Hwy 40) where the Stoney Nakoda Resort and Casino is now resident?

Did you know there is another prisoner of war incarceration location on the Bow Valley Parkway 1A west of the Town of Banff?  Watch closely to your right when traveling west near the trail-head access for Castle Lookout.

Go searching.  Have some fun and enjoy the fresh mountain air!

The interpretive plaque at Colonel’s Cabin

Normally, only a few minutes would be spent here, but today, there is time and opportunity to wander around. 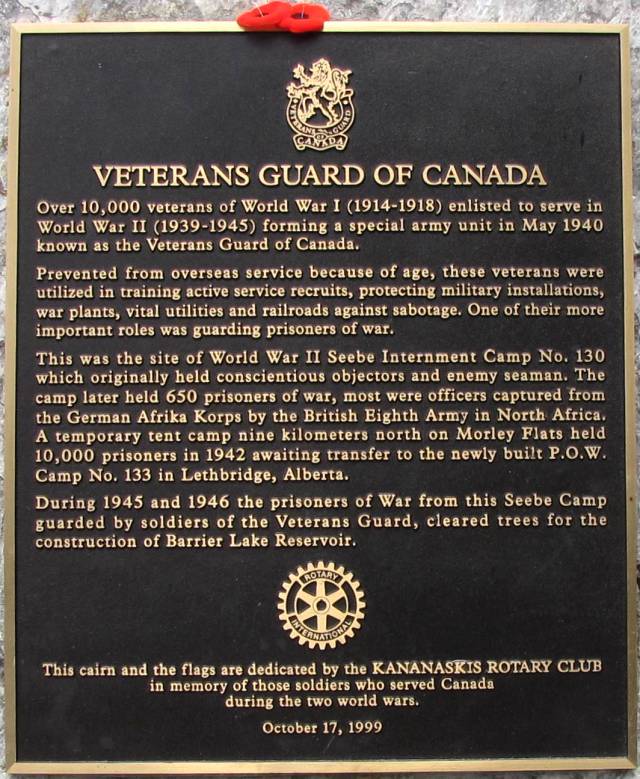 Interesting text on the Commemorative Plaque

Beginning near the Colonel’s Cabin, there are two short interpretive trails.  One is the 1.5 kilometer Forest Interpretive Trail which will be left for a drier summer day.

There is an opportunity to stroll the 0.3 kilometer History Loop (except for stops 6 and 7 which are waterlogged).  Quite frankly, there is not much left to see other than some nondescript numbered signposts from 1 to 8 (# 1 is the Colonel’s Cabin: # 2 is the Guard Tower).

The short, easy, loop trail continues on the other side of the entrance road.  There are several old foundations.  Unfortunately, the interpretive brochure which would bring these locations to life is not available this day.

A family could bring young children here in the summer and participate in  fascinating conversation for quality time together.  Contacting the Barrier Lake Visitor Centre for opening times would be wise and it is likely they have the interpretive brochure.

No comments to show.