Josephine Mine at Many Glacier in Glacier National Park, Montana, USA.

Today, the second attempt will be made to explore Josephine Mine located over the top of a large rock outcropping on the south side of Grinnell Point in Glacier National Park, Montana, USA.

In September of the previous year, the first solo attempt failed.  The effort failed by being sucked in by a goat trail that went too high, too soon.  It resulted in being trapped where the scramble to the top was not achievable.  There was insufficient time on that particular day to regroup and try again.

Today's effort begins again with the half kilometer (¹⁄₃ mile) walk from Swiftcurrent Inn to the Swiftcurrent Lake trail-head for the hike along the west shore of Swiftcurrent Lake.  Intermittent sun on a cool morning may be victim to heavy weather visibly moving in from the west.

The Swiftcurrent Lake shuttle boat, 'Chief Two Guns’, is docked at the far end of the lake to unload passengers and there are early morning, majestic views of the Many Glacier Hotel on the other side of the lake where Altyn Peak and Apikuni Mountain provide the spectacular background. 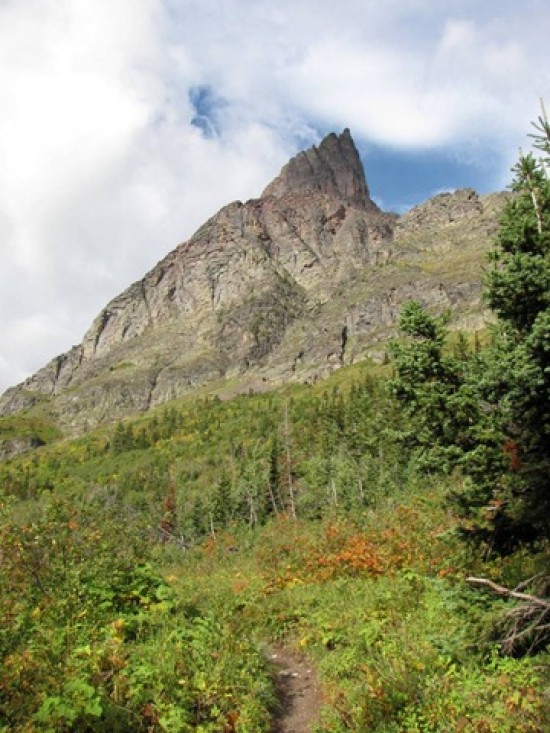 The short hike up and over a shallow, ancient, lateral moraine leads to Lake Josephine and the hike continues along the south shore until arrival at the lakeside pond.

The Lakeside Pond along Lake Josephine in Many Glacier

This is where an abrupt right turn is required to off-trail directly up the side of Grinnell Point to the sheer cliffs according to Instructions from  ‘A Climber’s Guide to Glacier National Park’ authored by J. Gordon Edwards.

The issue is not to find a trail.  The problem is to locate which trail is the right one.  The entire, steep slope is interlaced with snippets of game and human trail but none show predominant influence.

Reconnaissance time is taken, even though weather is going to become an issue within the next few hours.

There is a wonderful view of the infamous Lake Josephine shuttle boat docked at the far end of the lake. The image brings back vivid and fresh memories from the Grinnell Valley hike.

The traverse continues, this time staying low, while vigilantly scanning the cliff face for the route up and over the top.

After an hour, it is clear the position is too low and the route has been passed.

There is an obvious digging on the rock face ahead, easily identified by the triangular, greenish tailing mound below the mine tunnel into the rock face, but it is far too low to be part of the Josephine Mine complex which is located on top of the outcropping at an elevation of 5,338 ft (1,627 M).

On the return hike, by an even lower line, the cliff face is constantly scanned for the correct route.  It is there, but remains unidentified.  This second failure is mildly discouraging but there is an alternate plan for the day.

Back at Lake Josephine’s lakeside pond, a right turn on the trail towards Upper Grinnell Lake and Grinnell Glacier will hunt down the old miner’s trail which leads to Josephine Mine along the top of the large rock outcropping.

The trail used by the miners is located near the severe, reverse switchback directly above Lower Grinnell Lake.  The problem is this trail, used for miners transportation to work the late 1800s and very early 1900s, was abandoned for many years, used sketchily in the 1950s, 60s and 70s by Parks, then abandoned again.  The access to find the trail is now an off-trail bushwhack.

Gradually gaining significant elevation coincides with the beginning of a drizzle backed by an increasing gusty breeze.

By the time arrival occurs above Lower Grinnell Lake, the weather has deteriorated to significant rain and a strong westerly wind.  There is no sense in continuing.  The effort ends to head home to the comfortable room at Swiftcurrent Inn.

Josephine Mine remains elusive on this second and possibly final attempt.  There are plenty of photographs available on the Internet.

One neat thing about the motel unit room at Swiftcurrent Inn is the electric wall heater located beneath the window between the two beds.  The room can be kept toasty warm before getting into bed at day’s end.

Then a quick reach over can turn the heat way down for better sleep in a cool room.  In the morning it is easy reach over to turn the heat back up which allows getting out of bed into a toasty room.  The room is small and heats up quickly.

After forest fire wiped out the Swiftcurrent Inn complex on August 31, 1936, the cabins were rebuilt in 1937.  The Great Northern Railway was convinced by Parks to build the coffee shop and lobby area in 1941.

In 1955, employee dorms were built as well as 3 motel units, bringing the Swiftcurrent Inn to its present 88 room capacity.