At the ruins of the old Glacier House Teahouse, there are lockable bins to store backpacks and other equipment being left behind.  For caving, sturdy leather hiking boots are mandatory.

After gearing up in coveralls, rock helmets, headlamps, caving gloves and knee pads, the hike begins to the nearby smooth walls of ancient, near-surface, cave development where the cave ceiling collapsed thousands of years ago.

Approaching an entrance to Nakimu Caves near the Teahouse - The area of ceiling collapse where we will exit.

This is near the location where the exit from Nakimu Caves will occur about four hours later.

The next step is another one kilometer (⅝ mile) hike with 200 meters (656 ft) of descent on primitive, rugged and sketchy trail through dense underbrush to the gated and locked main entrance.

To regain this elevation will require significant effort inside Nakimu Caves.

Dropping off Balu Pass for the descent into Cougar Brook Valley

The entrance to Nakimu Caves.  It is one of several.

At the gated entrance there is a noticeable, cool breeze coming from inside Nakimu Caves.  The internal temperature of the cave is near 5 degrees C (41° F) year round.  As entry proceeds in single file, the first maneuver is a short drop over a ledge on wire caving ladder into a passage below.

Droplets of water on rock surfaces catch the light from our lamps and create the illusion of diamond encrusted walls and ceilings.  The trip includes a number of fascinating features through tunnels and chambers.

Many features must be negotiated on hands and knees.  There are narrow openings requiring tight-fit contortion to get to the next section which alternate with large galleries several meters high. 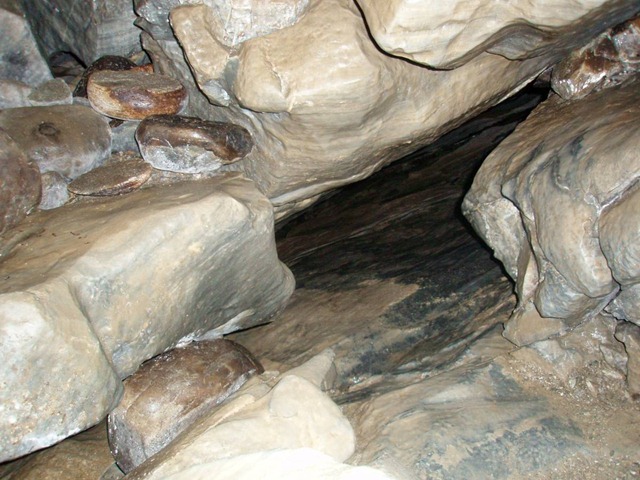 One of the predominant features of Nakimu Caves is prolific deposits of moonmilk ‘growing’ on the caves walls and ceilings.

Moonmilk is a creamy-white deposit resembling tiny cauliflowers.  It is thought moonmilk is formed in absolute darkness by a bacterium capable of producing crystals of calcium carbonate.  No-one seems to be sure.

The deposits are soft like cream cheese and there is a nearly overwhelming urge to touch the accessible deposits.  A small scar may take hundreds of years to ‘heal’.

Photographs are captured of a huge moonmilk deposit several meters above me on the walls and ceiling.

There are a couple of places where the river running through the cave can be seen from precarious viewpoints.  The water is fast, furious and loud as it roars too far below for a picture.

This would not be a good place to slip and fall.  Near the end of the four-hour adventure tour inside Nakimu Caves, the tour is about 60 meters (197 ft) below the surface.

The second to last scramble is is a unique scramble up a waterfall.  At the top of this scramble is a sensational underground grotto where Cougar Creek enters Nakimu Caves.

Reverberating sound from another powerful waterfall accompanies afternoon bright sun streaming through the mist.  The ethereal chamber is a very challenging and photographic paradise.

There is only a single, 30 meter, steep pitch of wet-rock scramble remaining.

It is not in my nature to ask for help but I must have looked as pathetic as I felt.  Stefan swings around in front of me and scrambles ahead.  From the top he yells commands at me.  Go right.  Go left.  Go under.  Go over.

There is neither room, time nor need for discussion.  I do as I am told while he analyses, identifies and communicates the easiest and most efficient route.

The rubber palmed caving gloves are sticking well even though they are virtually destroyed and will never cave again.  Behind, a young couple are grabbing my ankles and boots to stabilize my feet on the wet, slippery rock.

In reflection, the appreciation for their assistance is substantial.  What has been given in the past is being returned.

The names of the young man and woman helping my feet stick remains unknown but I will always be profoundly thankful for their unsolicited assistance with minimum impact to my stubborn independence.

In the Balu Pass post the fact is not mentioned that there is some level of certainty the Guinness record for world’s slowest ascent out of Cougar Brook Valley to the summit of Balu Pass was established, by me, on this day.

Thank you Eric, and others, for your assistance.