The Hermit Trail is a steep hike to great views and alpine trails in Glacier National Park, British Columbia, Canada.

Departure from Calgary begins very early for the 260 KM (163 mile) drive west through the mountains past Banff, Lake Louise and Yoho National Park along the TransCanada Highway to Golden, British Columbia for a hearty breakfast at Smitty’s before topping up the gas tank and continuing west for another 160 KM (100 miles) to Rogers Pass in British Columbia.

Significant highway construction continues in the Golden area due to twinning of the TransCanada Highway and speed must often be reduced.  Throughout the trip listening to Il Divo captures the grandeur of the mountains.

On the final ascent to Rogers Pass, the drive proceeds through five consecutive, closely spaced tunnels.  These are snow sheds which provide protection from avalanche in winter.

On the other side of the last tunnel is the well-signed parking area and trail-head for The Hermit Trail.  An hour has been gained in the time change from Mountain to Pacific Standard Time. 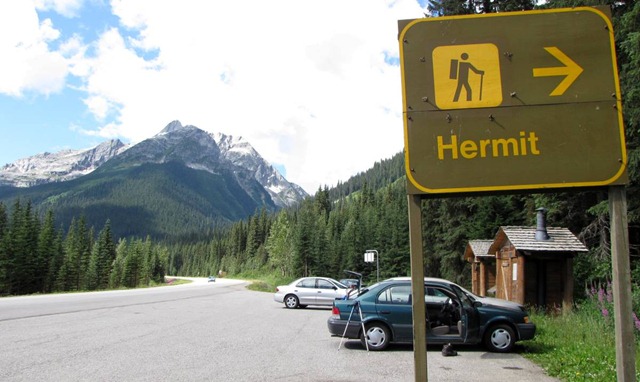 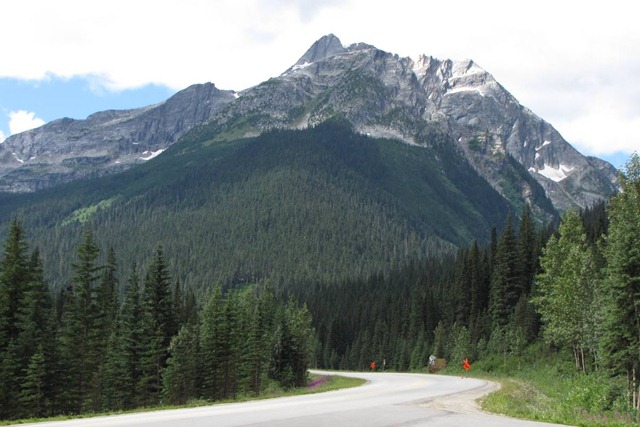 The first 50 meters (165 ft) of trail is pristine gravel through cedar-hemlock before changing to a more traditional rocky surface adjacent to trail-side moss, fern and rich, aromatic, old growth forest. 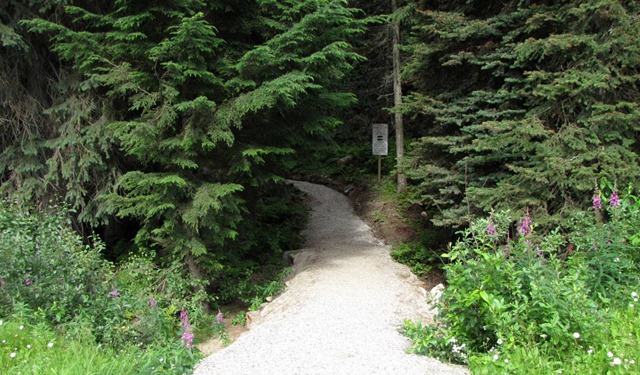 Behind me, on the other side of the highway is 2,878 meter (9,442 ft) Mount MacDonald, named for the first Prime Minister of Canada, Sir John A. MacDonald, and to my right is 2,804 meter 99,200 ft) Mount Tupper, named after Sir Charles Tupper, one of the Fathers of Confederation.

The trail position soon looks down on Glacier Park Lodge whose distinctive green metal roof is across the TransCanada Highway from the Parks Canada maintenance facility.

The Hermit Trail is named for a feature on the ridge of Mount Tupper, originally named Hermit Mountain.

A rock pinnacle along the ridge line of the Hermit, which from a distance, appears to be a man standing on top, is adjacent to a smaller rock designated as the hermit’s dog.

Both are clearly visible on this gorgeous, sunny, warm day with an occasional touch of breeze. 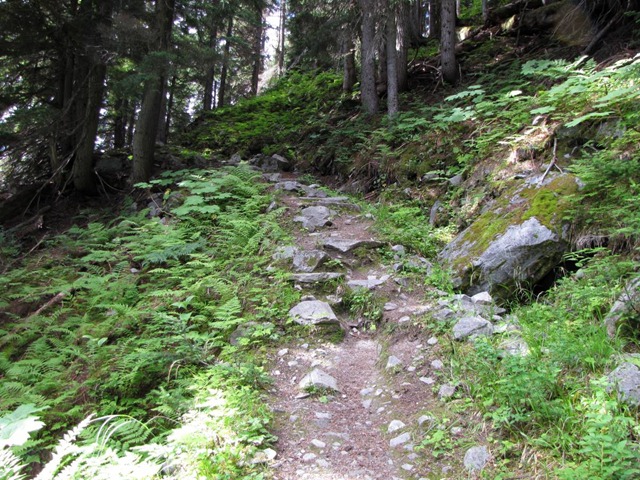 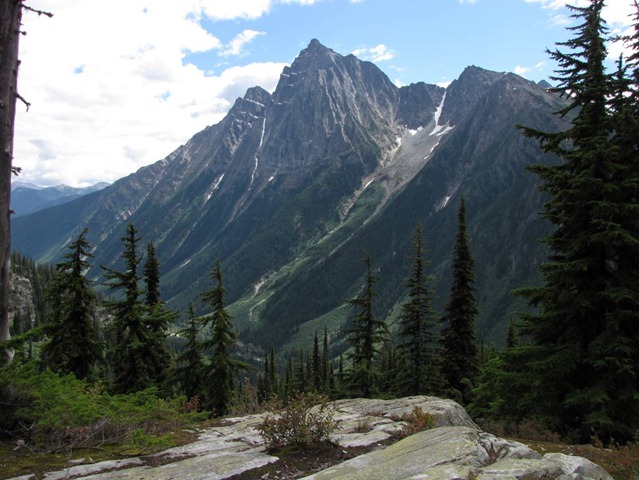 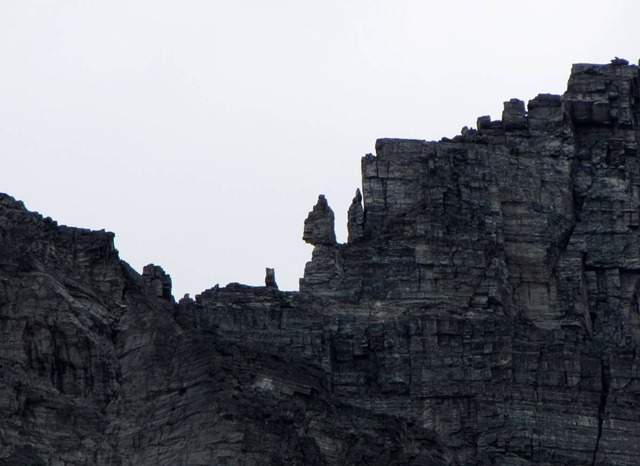 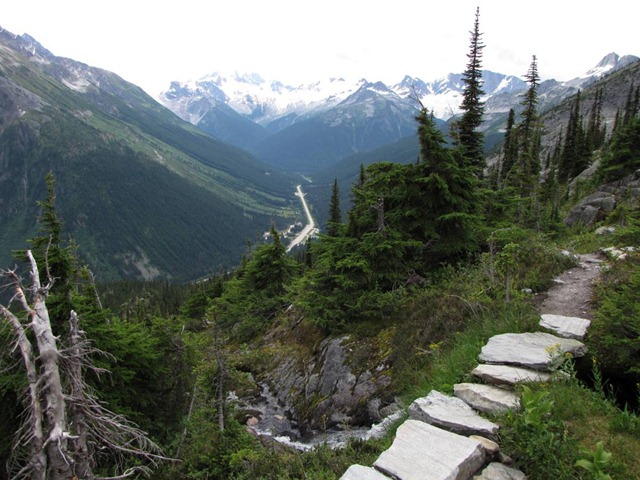 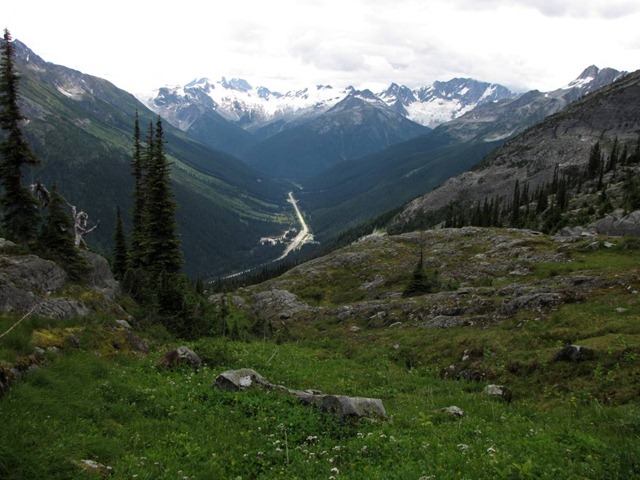 The very steep, variable pitch trail begins to level out near the top on stone slab path.  One section with a steep step offers an anchored rope assist.  There are spectacular views of the ice fields behind.

The trail ends in a large, rocky bowl with a trail extension into an adjacent picturesque valley.

Four back country platforms at the end of Hermit Trail, in an area called Hermit Meadows, are occupied with tents among rock fall and multiple water sources.

There is also an open air toilet and bear-proof bins for storage of food and gear.  To get better visuals of the mountains beyond requires scrambling a scree moraine ahead to the left. 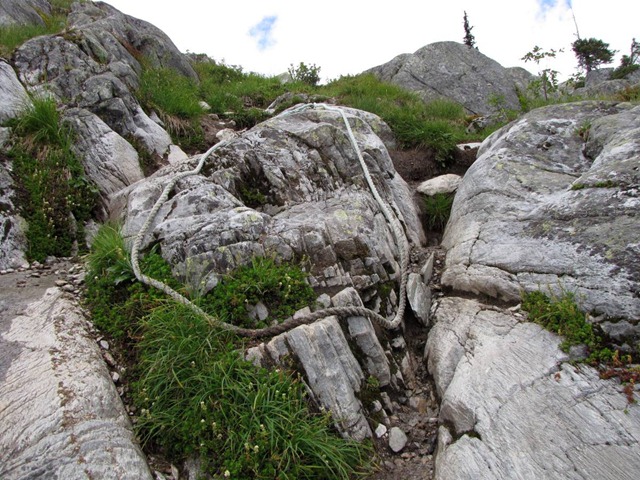 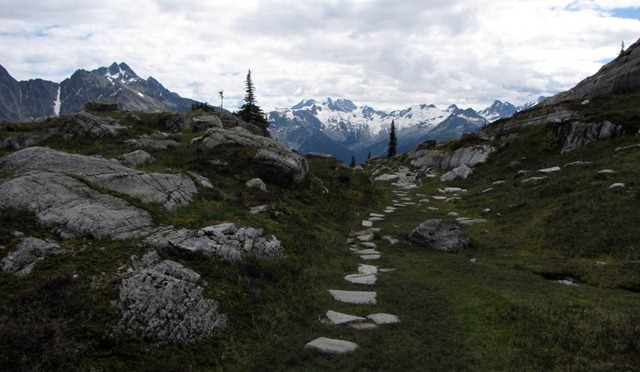 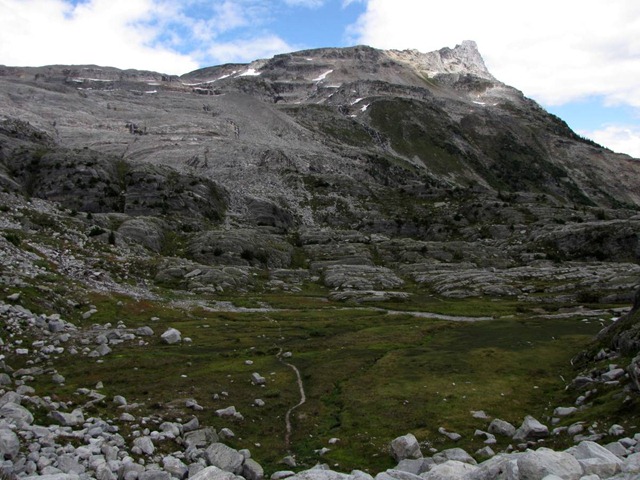 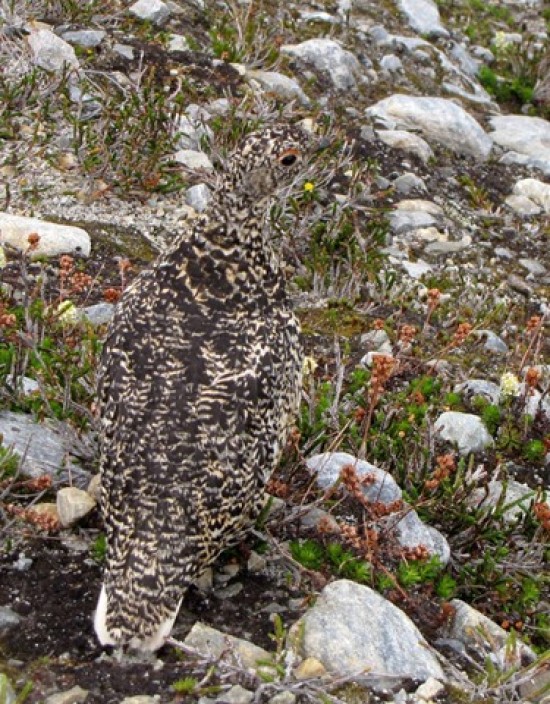 On a nearby ridge a Ptarmigan is shepherding her three young chicks. 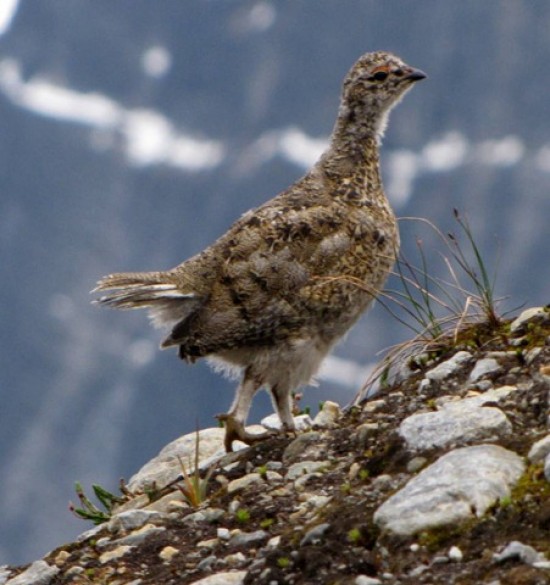 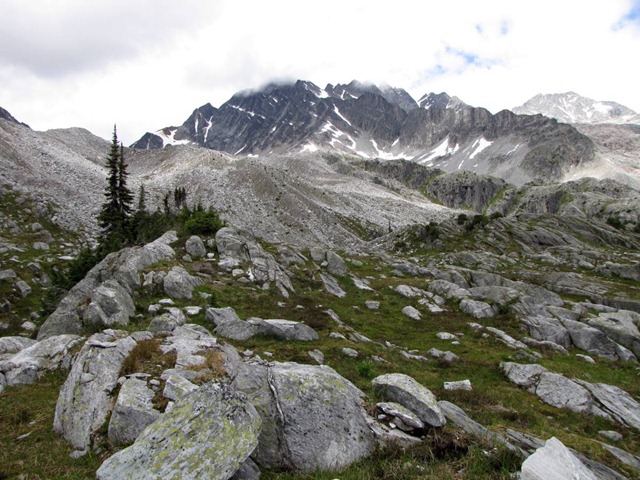 Prior to the descent via the same route, some off-trail hiking through wetlands and glacier-smoothed rock bands provides an incredibly scenic experience.

Views are awesome in the warm sun and lunch is perfect in a quiet, comfortable place where a perfectly shaped rock cradles the back to relax and enjoy the spectacular vistas. 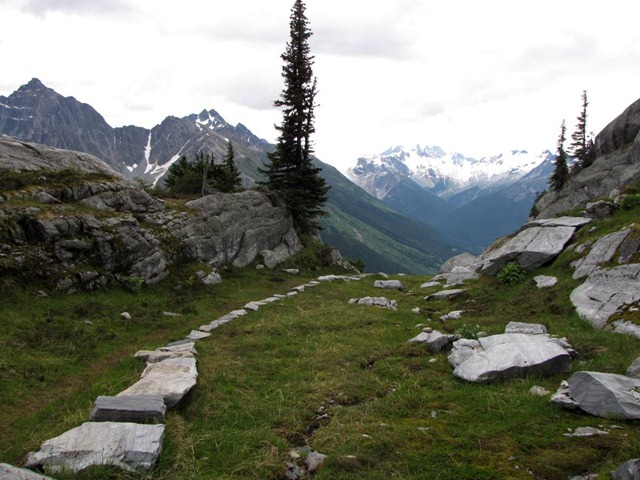 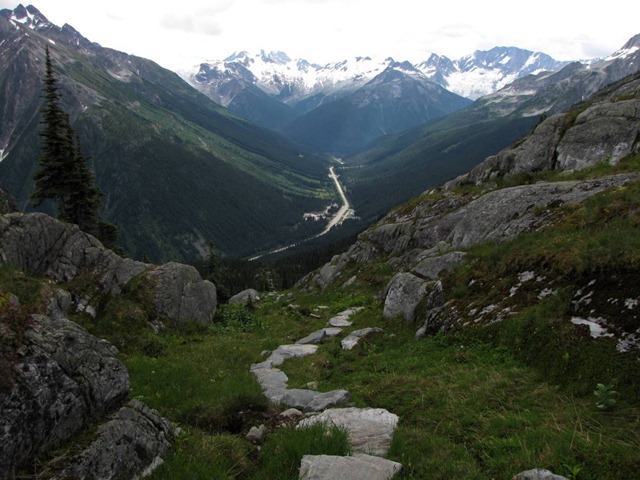 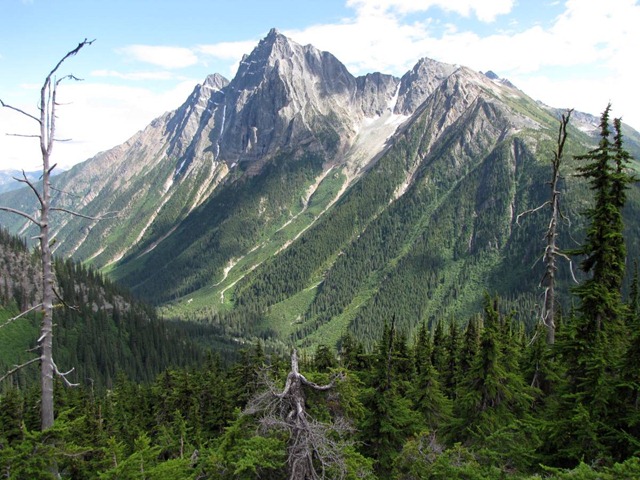 The following photo will provide a partial view of the spectacular scenery on the other side of the scree slope.

The photo features the Rogers Glacier on the flank of 2,922 meter (9,587 ft) Mount Sifton, named after Sir Clifford Sifton, with a pristine glacier-fed alpine lake below. 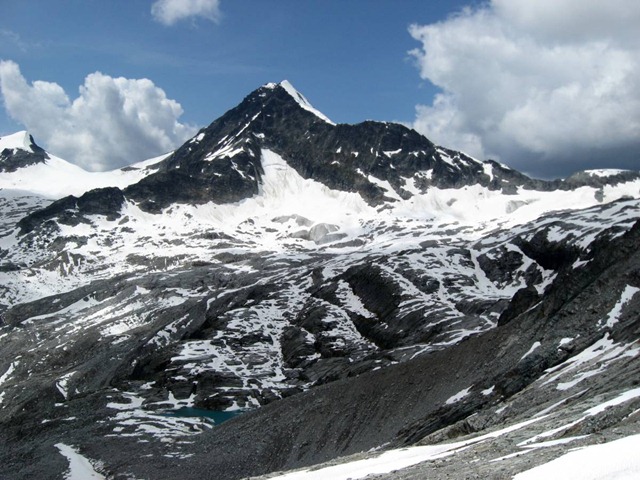 This great day is completed with perfectly adequate accommodation at Glacier Park Lodge and an excellent and well-earned meal in the dining room providing a magnificent view of the sun setting over massive glacial ice fields in mountains to the west.