Standing at the base of Takakkaw Falls is a forever memorable experience.

‘Yoho’ is the Cree Indian word meaning ‘awe’ or ‘wonder’.

The drive west from Calgary, Alberta, Canada on the TransCanada Highway past Canmore, the Town of Banff and Lake Louise is under sun, until the British Columbia border where it is raining lightly.

Just over 12 KM (7½ miles) past the east border of Yoho Nation​al Park, a right turn onto Yoho Valley Road soon gains elevation aggressively on the twisting, turning, roller coaster, smooth, paved road clinging to the side of a mountain in a tight valley surrounded by lofty peaks.

There are three severe switchbacks on this road which are barely within the grasp of the tight turning radius of the Toyota Tercel.  Large vehicles must maneuver the impasse within something similar to a three-point turn.

At the end of this 13 KM (8⅛ mile) road is Takakkaw Falls, visible prior to arrival, which adds to the anticipation of making the short, 0.5 KM (¹⁄₃ mile) walk on paved trail, from the parking area at road’s end, to the base of the impressive falls.

The sound and power at the base of Takakkaw Falls is exhilarating.  The power of the falling water shakes the soul.  Negative ionization is abundant.  Mood elevation is possible.

Fed by the Daly Glacier, which is fed by the Waputik Icefield, the roaring river water has the distinctive milky, blue consistency created by glacial silt. 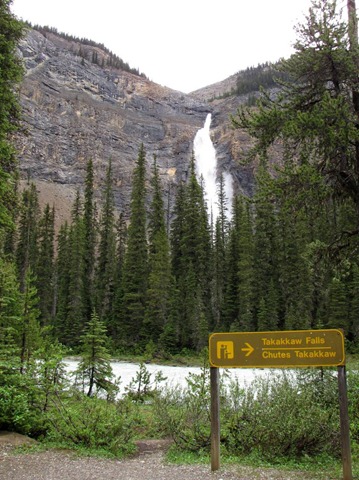 Takakkaw Falls is Canada’s second highest (not largest), permanent waterfall.  The tallest (not largest) waterfall is Della Falls in Strathcona Provincial Park on North Vancouver Island and is accessible by long trail, or boat by shorter trail.

‘Takakkaw’ in Cree also means ‘magnificent’.  Takakkaw Falls has a tumbling free fall of 254 M (833 ft) and the biggest challenge is keeping the camera lens dry long enough in the mist to create clear pictures.

Photographs following provide initial views from several locations including Yoho Valley Road, the paved tourist trail to the base of the fall, and from Yoho Valley as this day's long hike continues past amazing natural features along the trail to Twin Falls beneath Yoho Glacier.

There will be four blog posts for this long hiking day so amazing natural features along the way to Twin Falls in Yoho National Park, British Columbia, Canada can be more fully appreciated.  This article is the first of four parts.