Hike specifications for the north route are:

From Dead Man's Flats, Mount Allan is past the full length of Pigeon Mountain and wedged between slightly lower Mount Collembola and massive 10,191 ft Mount Lougheed.

Early arrival at the trail-head finds a middle-aged couple from Colorado in need of assistance.  They have been counselled to hike the north route of Mount Allan but after several qualifying questions about their preferences combined with discreet examination of their footwear, detailed instructions are provided for the summit of Pigeon Mountain. 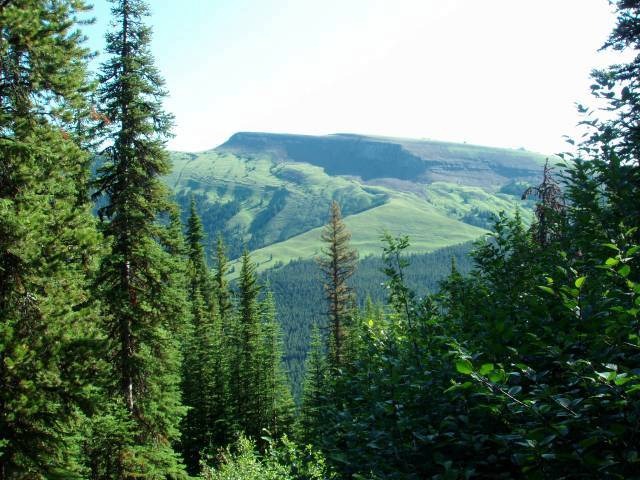 Looking across at Pigeon Mountain from the Mount Allan, North Route access trail

This is a reconnaissance mission for a potential hike early in August to traverse Mount Allan.

The south access from Ribbon Creek to the summit of Mount Allan has been hiked recently.  This hike is quality assurance for the other two thirds.

Today's hike to the summit on the north route from Dead Man's Flats, with return the same way, has not been personally done previously.  Forest access is long but the intoxicating aroma is overwhelming and vistas begin to open up as elevation is gradually gained. 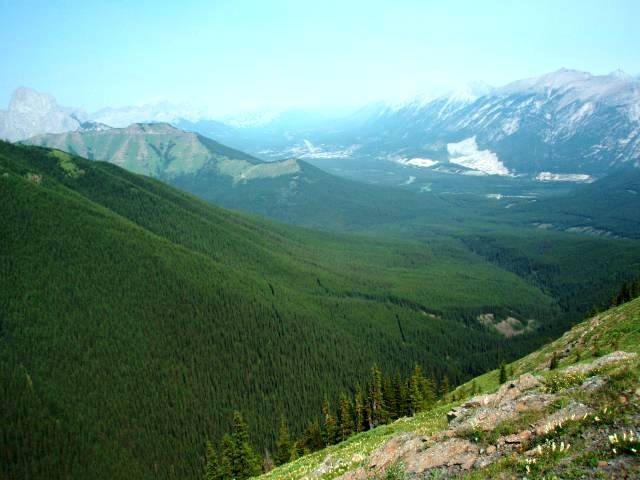 Gaining elevation onto Centennial Ridge with a view to Canmore, Alberta, Canada

It is a veritable garden of wildflowers on Centennial Ridge

Following two hours of hiking through forest and past a spectacular meadow, ten short, tight switch-backs through dense forest gain access to Centennial Ridge above the tree line and the long haul to the summit begins.

Easy scrambles are required but only one 4.5 m (15 footer) short scramble appears intimidating.  Multiple steps and firm hand holds make the scramble much easier than it initially appears.

The survey marker at the summit of Mount Allan - spectacular views!

View of Canmore, Alberta, Canada from the summit of Mount Allan

Scenic views along the lengthy ridge are inspiring and increase in intensity as elevation is gained gradually on gravel-like easily navigable scree.

Features ahead which seem like insurmountable rock obstacles in the distance are easily circumvented on good path.

The summit is achieved in early afternoon at a leisurely pace with allowance for several rest breaks and time for over a hundred photographs.

Voracious chipmunks are determined to remove food from the unattended backpack at the summit while photography is underway.  We get along a bit better during lunch.

Mount Collembola with Kananaskis Valley behind

Mount Allan Memorial sites honoring those who have climbed before us. 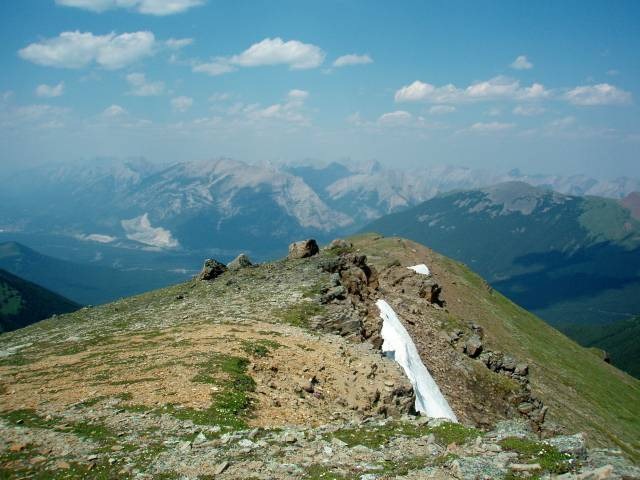 The return hike is via the same route used for access and it appears this hike across Mount Allan via the Centennial Trail is within the scope of reasonable endeavor.

Under the best of circumstances the hike over Mount Allan will be a very long and arduous day but the long haul across Centennial Ridge will be a phenomenal experience at higher altitude for an extended time.  The unfolding views are spectacular and relentless.