The amazing hike past Eiffel Lakes to Wenkchemna Pass is through the Valley of Ten Peaks.

The hike to Eiffel Lakes continues beyond to Wenkchemna Pass.

The drive west from Calgary, Alberta, Canada is largely in darkness and progress past the Town of Banff is achieved before pastel orange light from an uninspiring sunrise into cloudless sky begins illuminating the tips of mountains on the approach to Lake Louise in Banff National Park, Alberta, Canada.

Beginning the day very early gets ahead of the daily crowds and provides the opportunity to enjoy the incredible ambiance unencumbered. 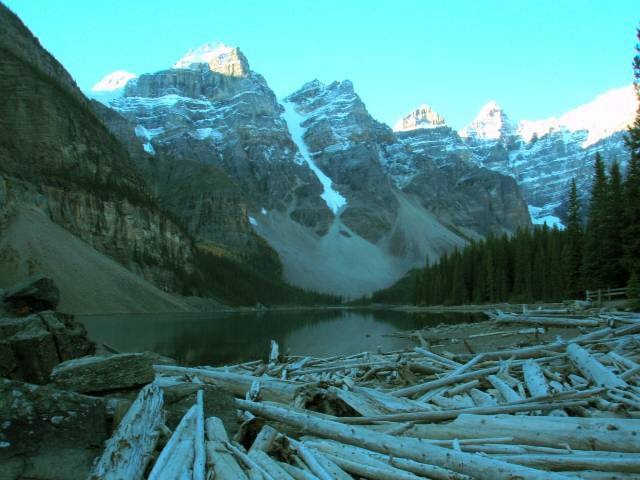 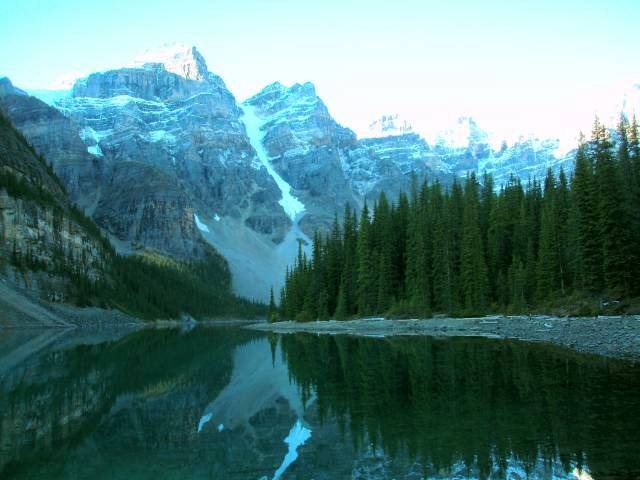 Autumn days are rapidly and quite noticeably getting shorter as winter approaches. At Moraine Lake, weather is brisk under clear sky and passing the gloomy lake-shore to begin the hike up the trail past streams and familiar, dense forest emerging from moss carpets conjures up good memories of a previous hike to Larch Valley and Sentinel Pass via the same approach.

The routine ascent over the 11 long switchbacks climbs 457 m (1,500 feet) above Moraine Lake and 3 kilometers (1⅞ miles) later arrival at the Eiffel Lakes or Larch Valley trail junction is welcomed by the familiar log bench. 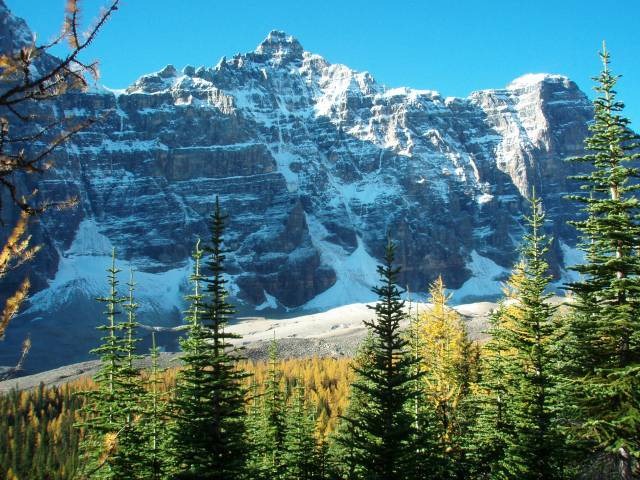 Growing warmth from sun invading the Valley of the Ten Peaks may justify layering down clothing to begin the next 3.2 KM (2 mile) segment in sunshine along more rugged, but still quite good trail to Eiffel Lakes.

The warmer weather combined with shelter in the Valley of the Ten Peaks and slightly lower elevation keeps the larch trees brilliant longer than their counterparts above in Larch Valley.

Hiking in the valley adjacent and south of Larch Valley,  the larch forest is on the left and 305 m (a thousand feet) below. 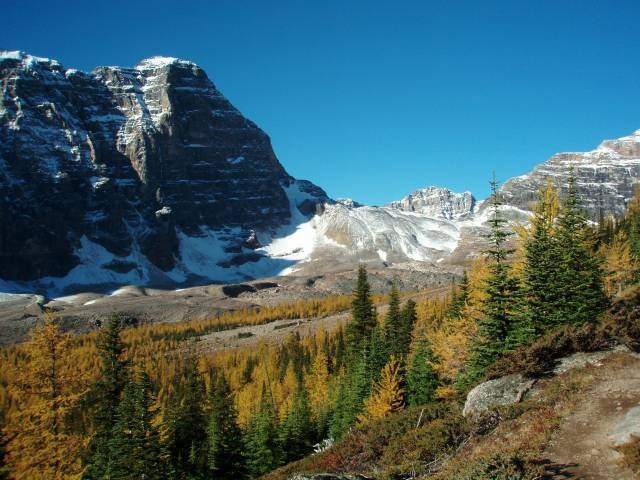 The Eiffel Lakes trail through Desolation Valley (named by explorer Walter Wilcox in 1893), is actually gaining virtually imperceptible elevation on the hike beneath 3,084 m (10,118 ft) Eiffel Peak to the right. 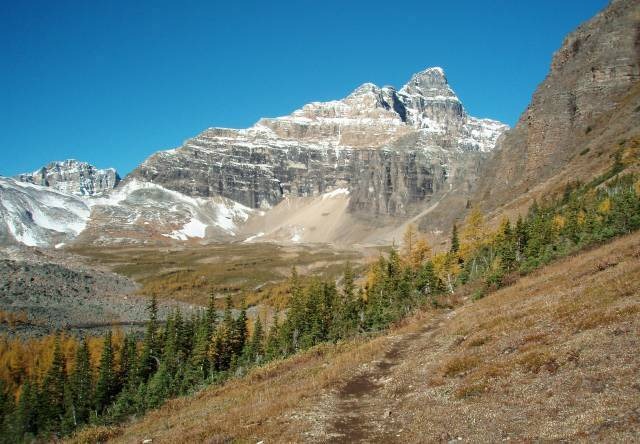 As the day warms up, silence is continually interrupted with the sound of tiny avalanches from mountains on the other side of the valley.

First, there is an audible crack, then a roar similar to the sound of an airplane.  Watching the snow tumble down the mountain-side is fascinating. 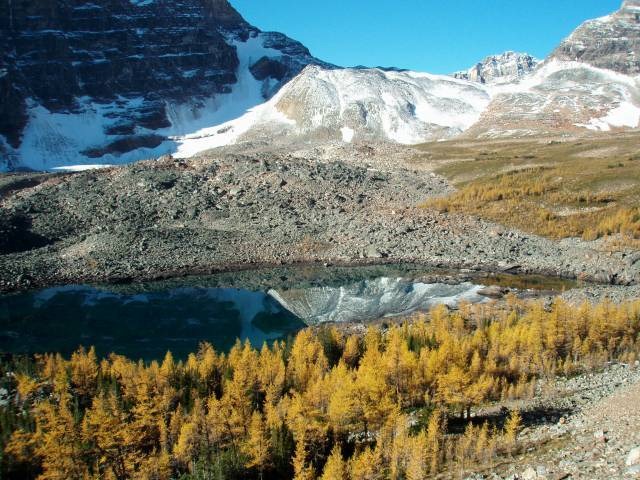 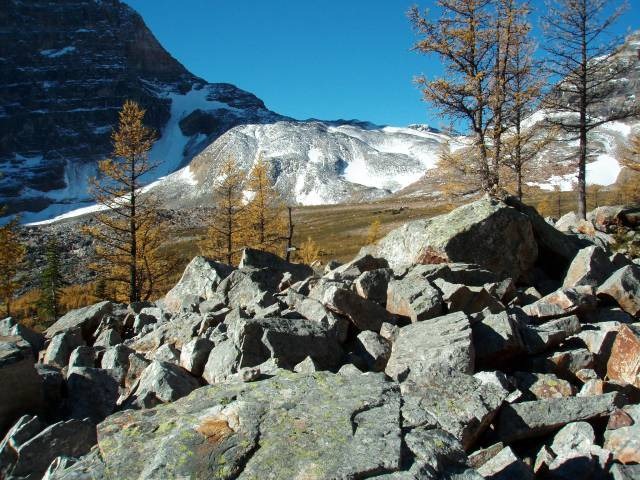 The trail gradually declines in quality to become more scree laden on the approach to the tiny lakes.  On the right, the scramble to Wastach Pass between Eiffel and Wenkchemna Mountains is inviting.  Eiffel Lakes water levels are very low, and nestled in the barren debris of rock fall.

The lake surfaces are perfect mirrors for surrounding mountains.  Immediately beside the Eiffel Lakes a massive rock fall has created huge piles of boulders.  There is a path winding its way through and around the obstruction but an option is traversing up and over the huge rocks for those more comfortable and experienced in bringing the risk profile up a bit by leaping from one boulder to the next.  Accuracy is important to avoid potential injury.

Trail beyond the boulder field continues over scree at the beginning of the additional 4.1 KM (2⅝ mile) extension, in a broad loop past minor lakes and ponds in the valley, to 2,611 m (8,566 ft) Wenkchemna Pass. 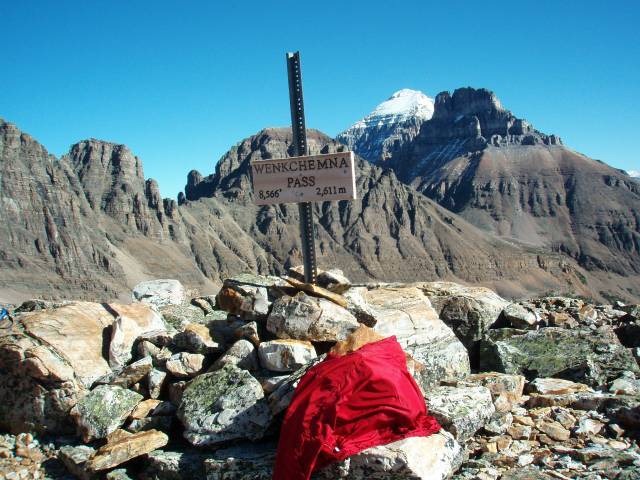 'Wenkchemna' is the Stoney Indian word for the numeral '10'.  The current names of the 10 peaks, all visible from Wenkchemna Pass, in order, from Moraine Lake are: Fay, Little, Bowlen (Tonsa), Perren, Septa (peak 5), Allen, Tuzo, Deltaform, Neptauk, and on the near side of the Pass, Wenkchemna Peak.

The name 'Eiffel' comes from the rock tower above the Pass which, with a tilt of the head and a fairly broad imagination, could be compared to the Eiffel Tower in Paris, France. 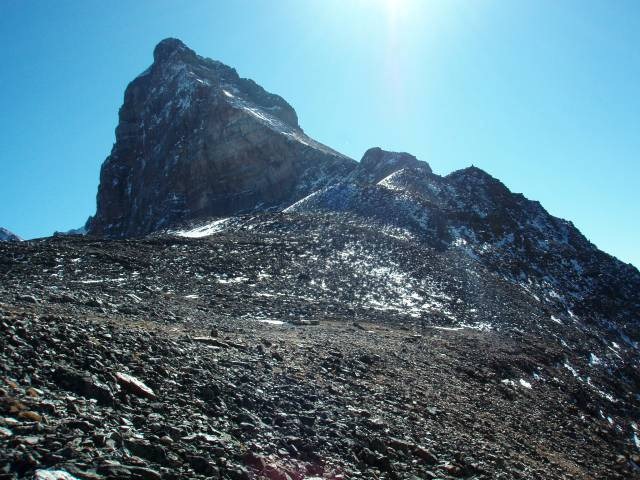 This range of mountain peaks forms the border between Alberta and British Columbia, Canada.  The names of the ten peaks were originally Stoney words for the numerals from 1 to 10.

At the end of the valley, the final approach to Wenkchemna Pass is riddled with ice and snow.  The 'trail' is confused with many game trails and partially covered with up to a foot of snow.  The sound of tiny rock falls continually invades surrounding silence but on closer examination the sound is caused by icicles, in the warm sun, breaking away from the sheer face of Neptauk Mountain.

Approach routes are compromised with ice and snow.  A straight scramble for the top gets shut down only once by a rift about 6 feet across and 30 feet deep.  It appears quite possible to jump over the chasm but when hiking solo the risk is unjustifiable, so a retreat to an alternate and safer route is more sensible.

A chilling breeze over Wenkchemna Pass demands attention but the incredible view into the end of Prospector's Valley on the other side is more than worth the compromise. 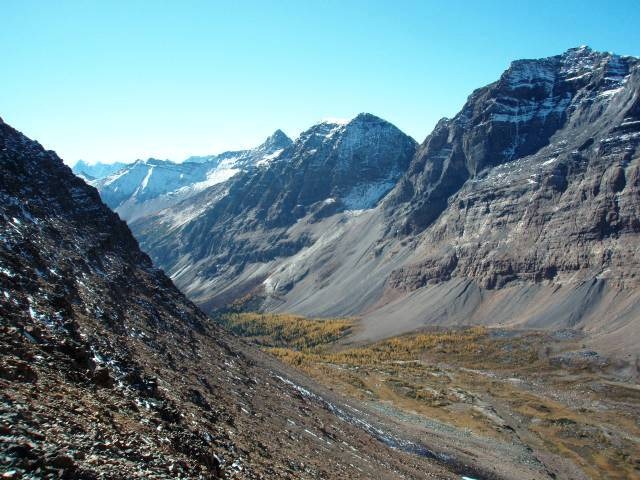 The grand views stretch west into British Columbia's  Yoho National Park, to the barren Eagle Eyrie and the ice-field leading to Opabin Pass and Lake O'Hara. The pack is dropped at the summit cairn to scramble both sides of Wenkchemna Pass and to capture a photo of 'Eiffel Tower'.

The easy scramble is more than justifiable to ascend above 2,743 m (9,000 feet) for views of the broad valley of lakes, moraines and Larch forest. WOW! 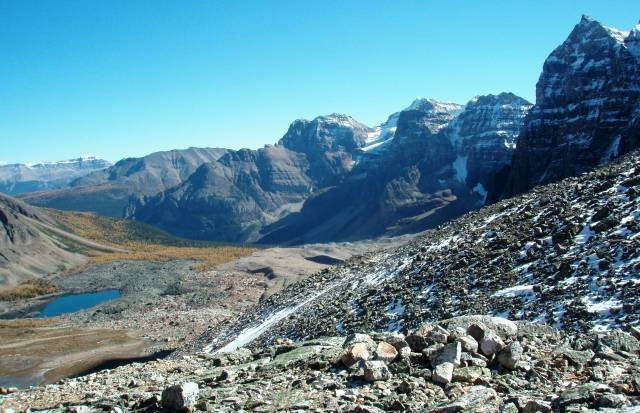 Lunch is enjoyable in the sun with shelter from the breeze provided by a natural rock alcove above Wenkchemna Pass.  In early afternoon the return hike begins by dropping straight off Wenkchemna Pass and off-trailing for a closer view of Eiffel Lakes before scrambling back up the side of the valley to regain the trail.

Hiking in sun, boots, shorts and a day pack is glorious.  Thousands of years ago this entire valley was buried under 915 m (3,000 ft) of ice in the most recent and perpetually occurring Ice Ages. 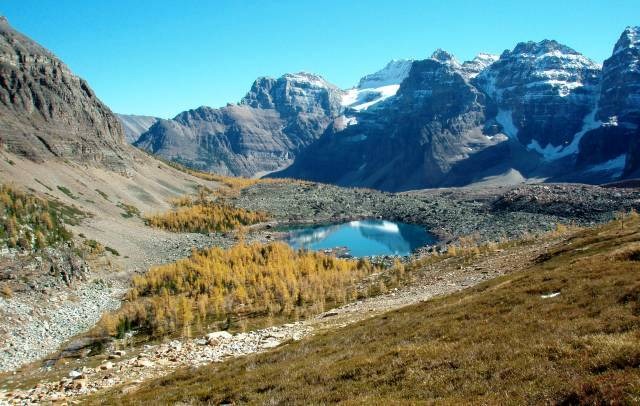 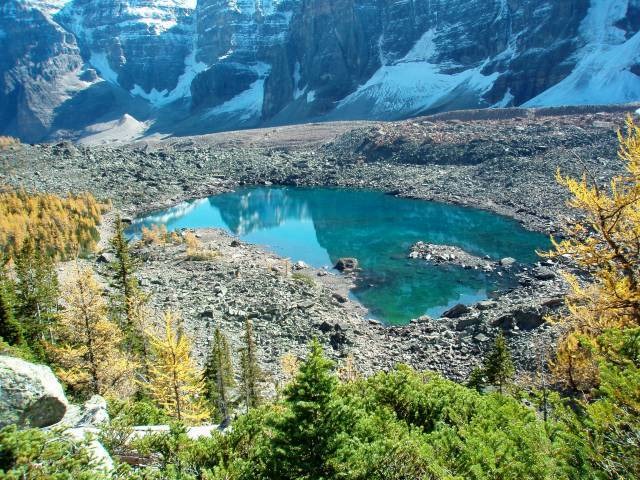 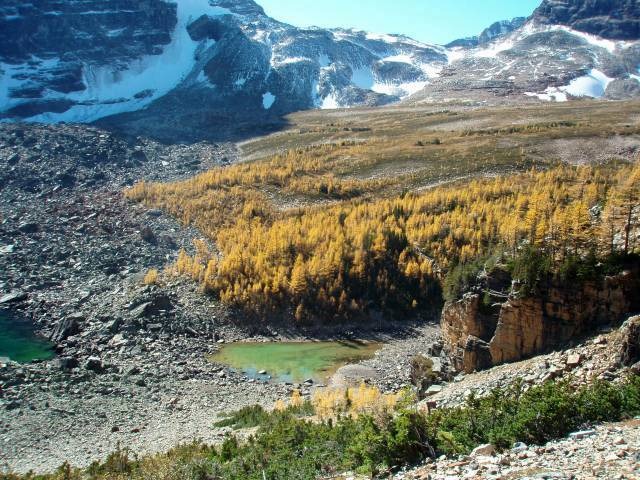 On the return drive to Calgary, a single stop near the Town of Banff nets photos of Mount Rundle and Sulphur Mountain across the colorful Vermilion Lakes in late day sun. 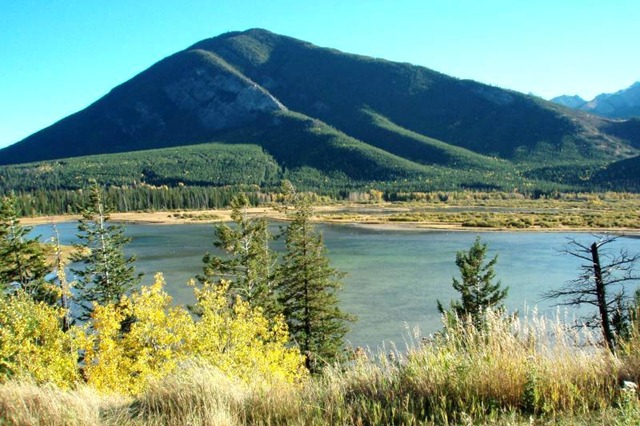