Today a solo hike will begin typically with the drive west on the TransCanada Highway from Calgary, Alberta, Canada to Kananaskis Trail (Hwy. 40) south to the gate and across Kananaskis Lakes Road for the loop around and up the Smith-Dorrien Trail to the Burstall Pass parking area at Mud Lake across from the trail-head to Chester Lake.

This route choice extends the distance but reduces driving the amount of potentially sketchy gravel road south from Canmore.  There is only one other vehicle in the parking lot.  A young man is preparing to hike solo in this area as well and leaves a few minutes ahead.

Mountain reflections in Mud Lake at the Burstall Pass trailhead

The reflective, still surface of Mud Lake is like a mirror framing inverted far side mountains.  New construction at the dam near the trail-head has left familiar trails damaged and confusing.

A half hour later the young man from the parking area is heading back from the trail at a vigorous pace.  Apparently the trail is hosting a large pile of bear scat and it has unnerved him.  This is a legitimate concern.

A cool, wet and late spring has delayed the Buffalo Berries which bears depend on for a major source of food in preparation for winter hibernation, so the bears are looking elsewhere.

A brief discussion ensues with a mutual decision to continue the hike together.  Within a few minutes the bear scat joins our presence.  The pile looks old but a finger poked into it confirms it is cold and crusty so there is no imminent danger.  It is definitely not grizzly poop, because there are no embedded bear bells and the pile doesn't smell like pepper spray.  If the bear scat is still steaming, a different hike would be seriously considered.

The hike continues and within a couple of rugged kilometers there is a magnificent waterfall along the trail to the French Glacier wedged between Mount French and Mount Smith-Dorrien.

The day's impromptu hiking partner is Hans, a 36-year-old mountaineer from Vancouver, British Columbia, Canada.  Together the hike to the French Glacier will require a battle through many kilometers of rugged forest on trail which has been flood-damaged and is not maintained.

Often the patchwork of game trails is better than the hiking trail, so backtracking and re-routing is common.  There is a lot of forest blow-down and dead-fall blocking the trail so off-trail around or climbing over is common.  At the creek much of the trail is gone or flooded, requiring more off-trail or river-edge, rock-face scrambling.  It is a workout but staying close to French Creek will eventually lead to the French Glacier.

Heading into the valley leading to the French Glacier 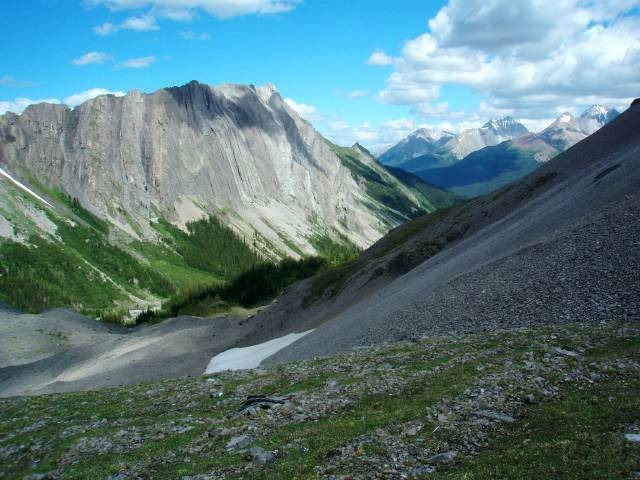 Within the final few kilometers, elevation is gained aggressively until the valley opens up into a series of moraines left by the receding glacier.  There are spectacular streams of water from melting snow patches and incredible flowers surviving in harsh, seemingly impossible terrain.

The base of the French Glacier - Peter Lougheed Provincial Park

Flowers flourishing against all odds

On top of a large moraine, a toughly-earned and well-deserved lunch is enjoyed in the sun.  The next hour is spent laying in the sun at 2,758 m (9,050 ft), surrounded by, ice, mountains, rock, and snow.  There is time to independently explore different areas before heading back.

Hiking the runoff from French Glacier in the valley bottom

The valley carved by the French Glacier

The route back is easier and more predictable.  The highlight is a moose encounter at close range.  The young, gentle cow is still a very large animal.  The moose allows us to get a bit closer for photos before the return hike continues.

The bottom of a magnificent waterfall twisting through rock channels

The adventure to the French Glacier requires about 20 tough KM (12½ miles) of rugged hiking and easy scrambling through 1,158 m (3,800 ft) of net elevation gain to a maximum elevation of 2,758 m (9,050 ft) over a longer day.  The goal accomplished together might not have been achieved hiking individually.

The French Glacier is an engaging hike with huge rewards.