Access to the Arches trail-head is about a mile (1.6 KM) west from the Red Canyon Visitor Center on Hwy 12, then north a couple of miles on the gravel Casto Canyon Road where the Arches trail-head is located near the entrance to Losee Canyon.
Arches Trail is a short trail hosting a vigorous climb which winds through a small red rock cove revealing a number of small arches. Vistas are incredible.
Accumulating storm cloud is forming up in the distance.  The entire hike is completed in less than an hour.  Following photographs tell the story. 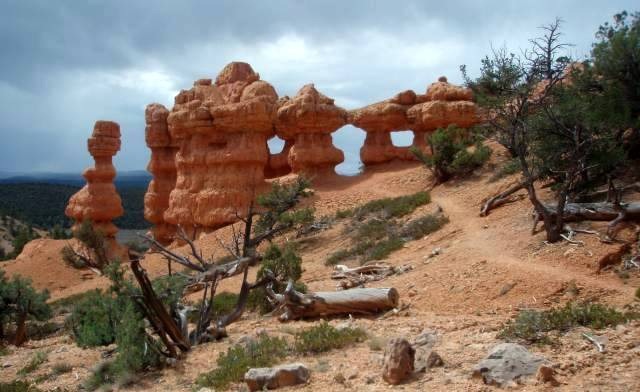 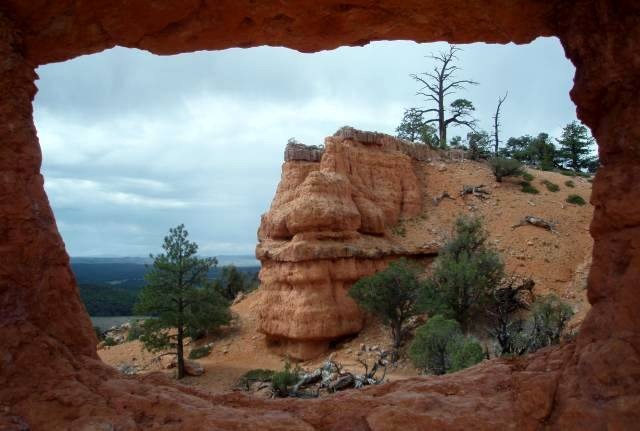 This short hike begins with a return from the Arches Trail to park on Highway 12 near the Red Canyon Visitor Center.  It is surprising so few people take advantage of these beautiful and well-maintained trails.
The scenery is spectacular but many people seem to stop on the roadside to briefly take pictures from their vehicles before they drive away.  This hike consumes another hour of this day.  Again, the photographs tell the story best. 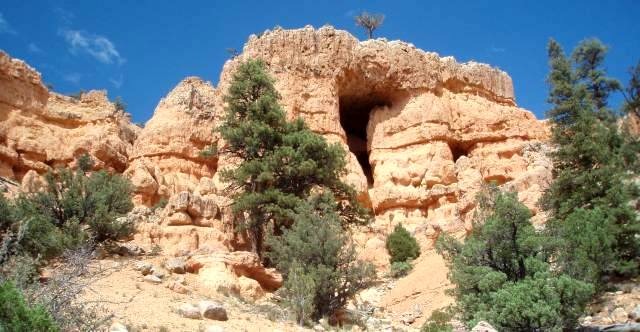 There is enough time left in this day to pursue an ambition held close to the heart for more than 30 years.
The Butch Cassidy Homestead
Since being a young boy, Butch Cassidy has been the stuff of legends.  Arguably one of the most infamous and successful outlaws of the pioneer west, he still invokes mystery many decades following his death.
The Birdseye Trail hike is followed by the drive back to Panguitch, Utah.  At the local pharmacy in Panguitch a young lady reveals in conversation she knows where Butch Cassidy's homestead is located.
Not only does she know where it is, she is a friend of the family who owns the property it stands on and, after providing precise directions to get there, promises to phone them and have them open the gate for the exclusive ability to drive in and look around.
Following her instructions, the drive north on Hwy 89 from Panguitch, Utah occurs in a robust thunderstorm, through a spectacular narrow and steeply walled canyon between two mountains guarding the Sevier River.  The rain stops on exit from the canyon.   The entrance to Butch Cassidy's homestead is a mile south of the small town of Circleville.
Directly to the left is a small gravel driveway, with an open gate, providing access into an open field where Butch Cassidy's homestead stands only a couple of hundred yards away.  Excitement is palpable near the homestead with the opportunity to casually wander the property and investigate the two small wooden buildings.  There is an old log home with the insides gutted.  The decrepit building is in rough shape.
Even the stove has been removed from the stone hearth in the floor.  There is some evidence of intermittent restoration.  There are no signs, markers or evidence this is the homestead of the outlaw Butch Cassidy, other than a small, locked metal donation box on a metal pole.
The return drive to the pharmacy in Panguitch is completed just in time to thank the young lady at the pharmacy.  She shares conversations and stories told to her by elders when she was a young child which support the speculation that Butch Cassidy did not die in Bolivia and that he returned under an assumed name to live out his final years quietly near Circleville.  My newest friend believes he is buried anonymously in a local cemetery.
Thank you, young lady, for your kindness, generosity and time.
During this adventure it is learned that Robert Leroy Parker (Butch Cassidy) is believed to have met with his mother for the last time at the Blue Pine Motel in Panguitch, Utah which has provided perennial accommodation for these sojourns to this part of the American Southwest.
A separate blog post will be prepared to discuss the life of the infamous outlaw known as Butch Cassidy.   Photographs of the homestead will be shared in this subsequent post on Butch Cassidy.