Today's adventure begins with the drive from Panguitch, Utah to Page, Arizona. Page will be the second of three staging locations for this tour in the American Southwest.  There is a spectacular sunrise. 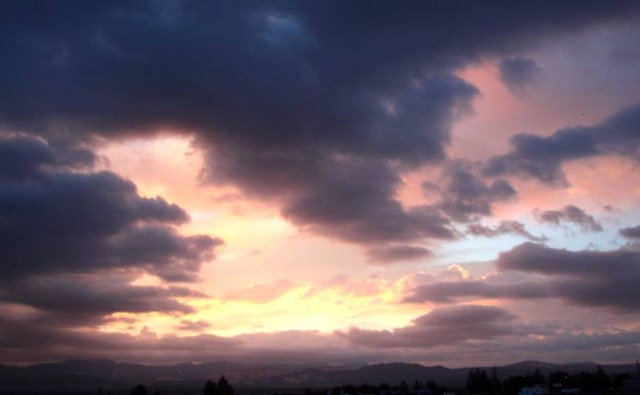 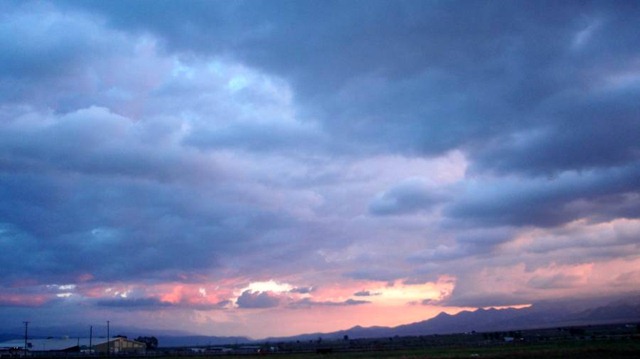 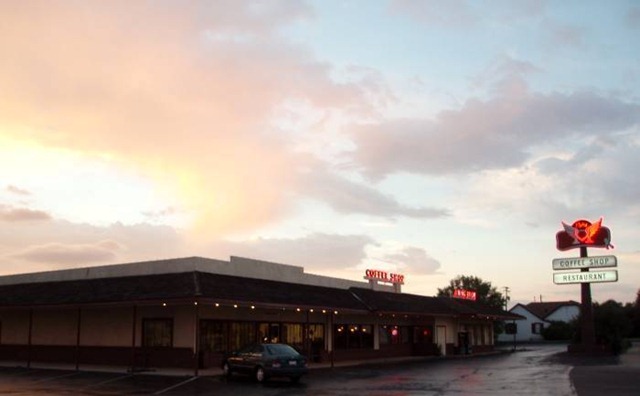 Like Saskatchewan in Canada, Arizona does not observe Daylight Saving Time so this day will be an hour longer than yesterday.

Following a hearty breakfast at the familiar Flying J, the drive begins south on Hwy 89, then east on Hwy 12 through Red Canyon past the Hwy 62 exit to Bryce Canyon National Park.

The impressive natural feature is not a canyon but rather a high-altitude, weathered edge of the Colorado Plateau.  Several hiking missions here in the past have left indelibly memorable adventures.

Soon, arrival at the Mossy Caves trail-head, which has been hiked twice in previous years, provides a brief opportunity to capture photographs of the spectacular, road-side rock formations above the Sevier River in morning sunlight.

The Mossy Caves trail has been hiked in past missions to the American Southwest and is definitely worth the time and minor effort.  Today, alternative objectives will take priority. 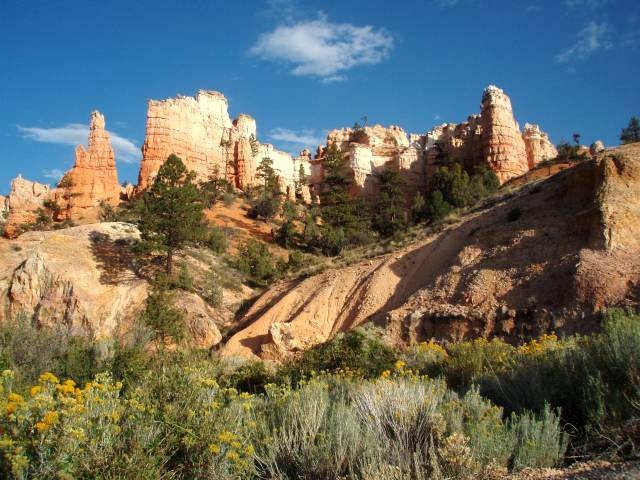 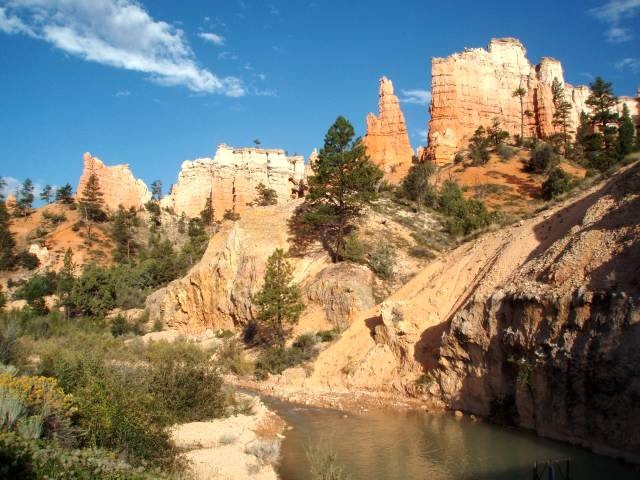 Continuing along Hwy 12 leads past the Grand Staircase - Escalante Visitor Center in Cannonville.  The plan for the morning is to tour Kodachrome Basin State Park, nine miles (14.4 KM) south of Cannonville, before continuing south through the Escalante on the gravel Cottonwood Road.

In 1981, an attempt to visit Kodachrome Basin State Park was thwarted when the Paria River was flash flooded and crossing was impossible without risk of the vehicle being swamped or swept away.  Now, there is a modern, concrete bridge over the Paria River.

Geologists believe that millions of years ago the pipes were likely formed as injections of liquefied sand, triggered by earthquakes, or created by ancient springs.  Softer stone around them has eroded away over time. 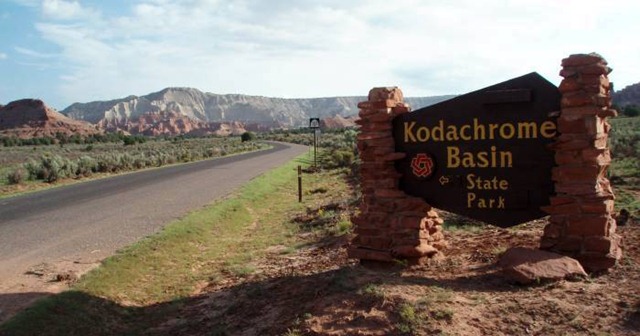 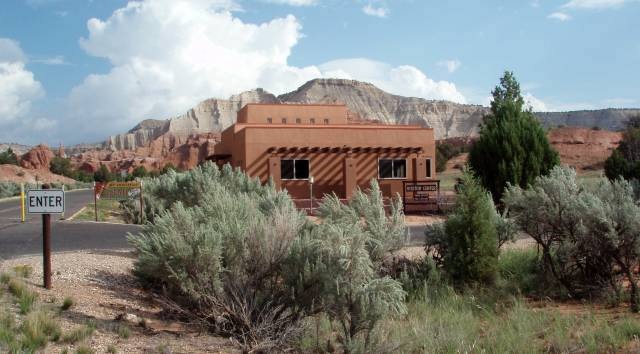 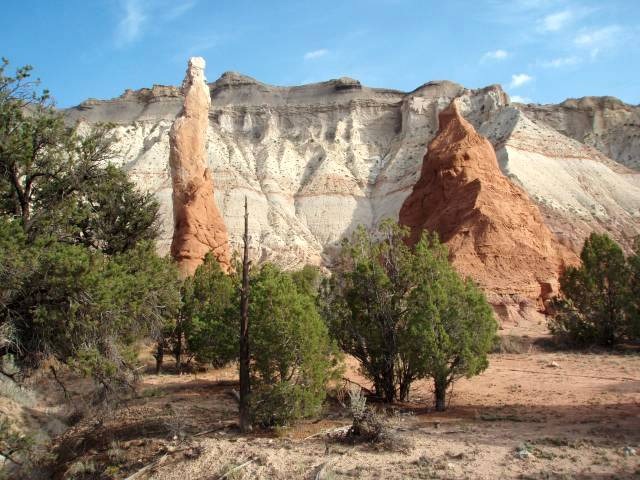 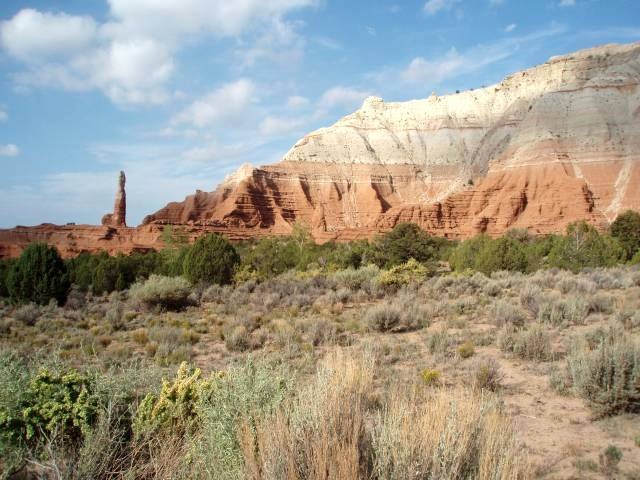 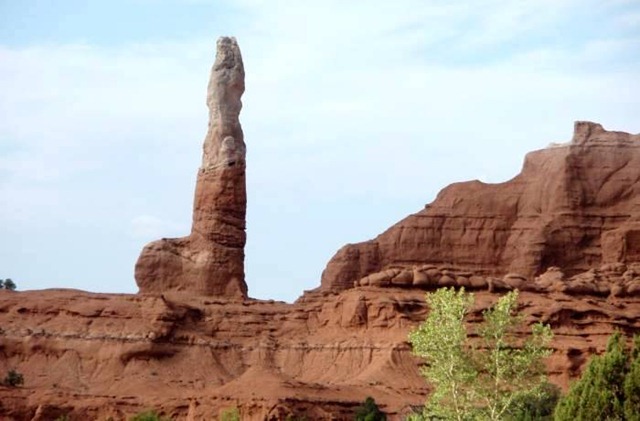 A variety of fascinating rock features are enjoyed and photographed prior to taking a gravel road east to visit  'Chimney Rock'.  Another gravel road south goes to the Shakespeare Arch Trail. 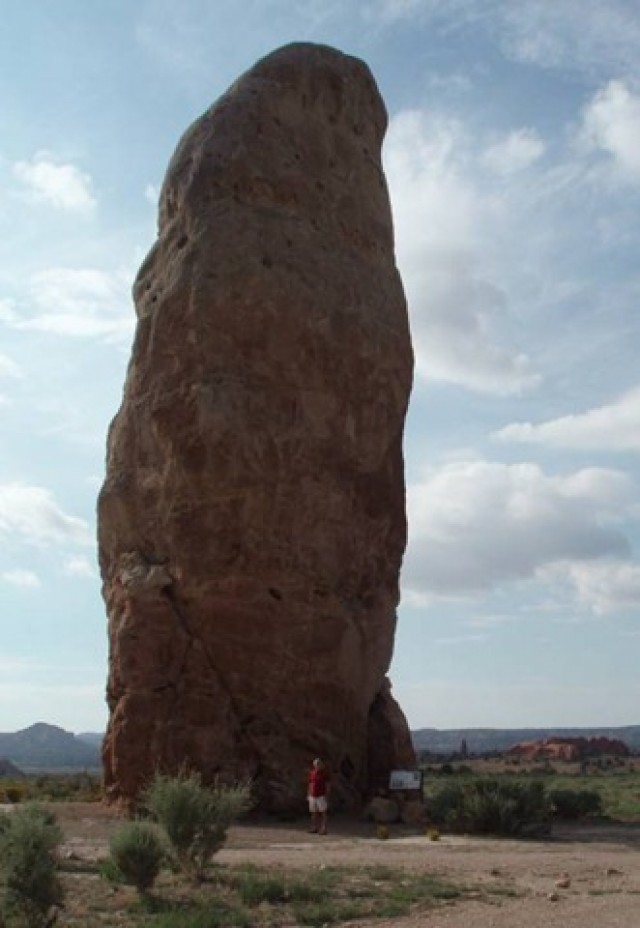 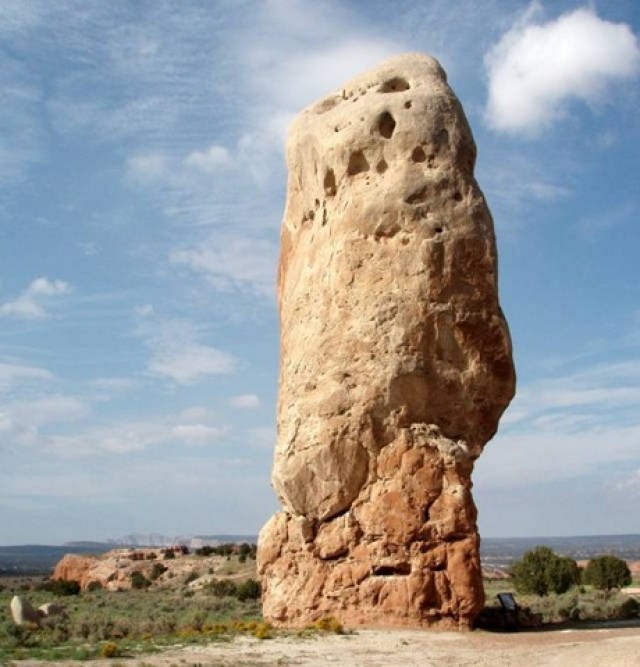 At the beginning of the short trail to Shakespeare Arch, there is a fence with a narrow opening to prevent cattle from wandering into the property.  Passing through the cattle-guard is a tight squeeze and there may be people unable to navigate the narrow opening.  It is important to be a narrow hiker.

The hike to Shakespeare Arch is a 1/4 mile (0.4 KM) on uneven, red sand through beautiful sage brush-saturated terrain interspersed with a variety of cactus.  Dry Valley is on the right and multi-colored cliffs are on the left.

Soon the objective swings into view.  The arch is 20 feet (6.1 m) across and 90 feet (27.4 m) high.  Shakespeare Arch, discovered by accident in 1976, is a progressively impressive, short, easy hike on the approach to the base. 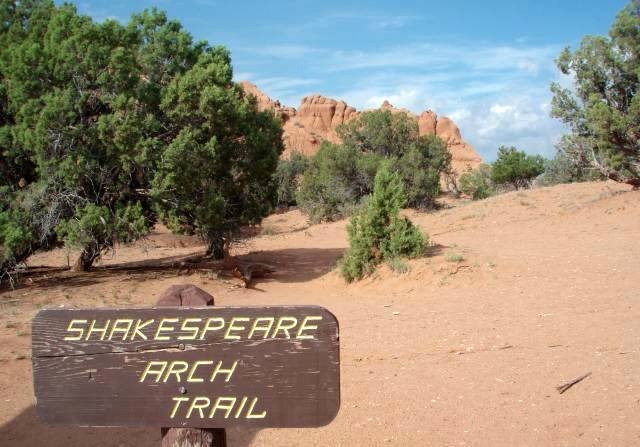 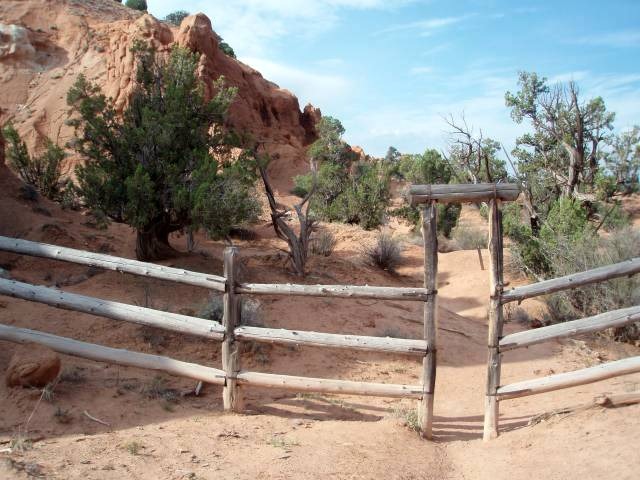 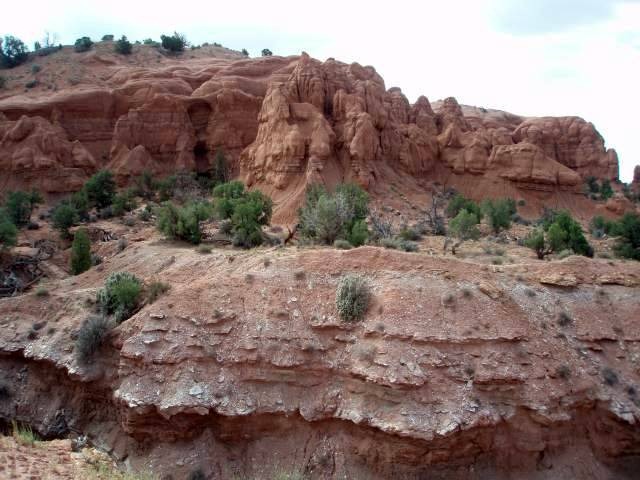 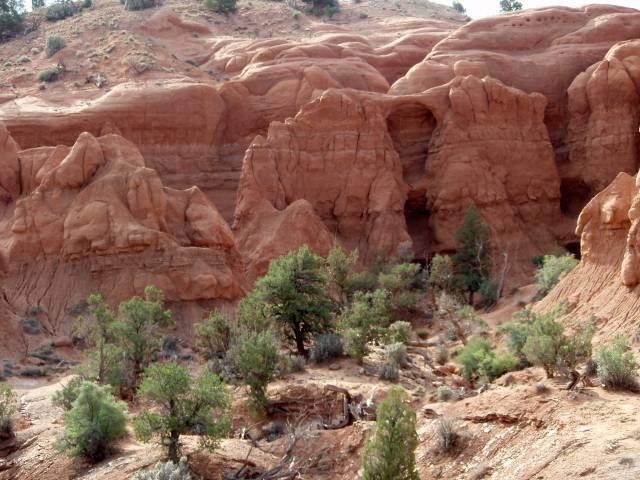 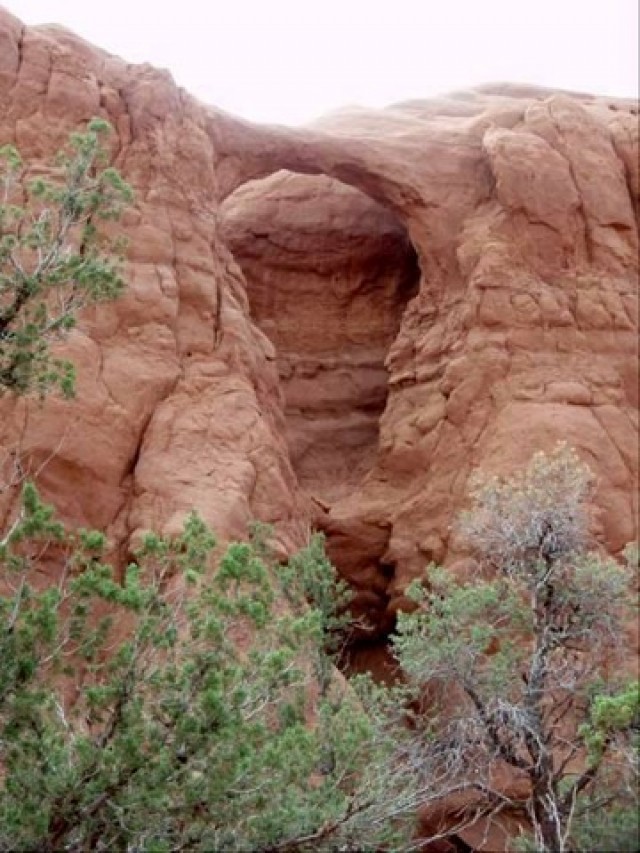 There are many more trails at Kodachrome Basin State Park than can be achieved on this brief visit.  The park is delightfully isolated and boasts an excellent 27 unit campground with restrooms and hot showers.   It would make an outstanding, and memorable 3 or 4 day hiking, mountain biking and camping trip.

Unfortunately, this is a travel day and there are many miles of driving to the next staging point in Page, Arizona.

There has been rain overnight so road condition knowledge is essential, making a chat with the local Park Ranger in Cannonville is mandatory.  The preferred best quality Cottonwood Road has been washed out and is impassable.  The very helpful Park Ranger informs me of two alternatives.

From Kodachrome Basin State Park the options are to return via the approach taken in on Hwy 12, back to Hwy 89 and then south, skirting around the Escalante National Monument, or another alternative might be to consider the 4-wheel drive Skutumpah Road which travels south through the interior Escalante west of the Cottonwood route.

About 10 miles (16 KM) of the route is very rugged 4-wheel-drive road but the Park Ranger adds "I think you can make it" with a hesitation and tone that leaves serious doubt in my mind.

Then he adds some disclaimers. "If you get stuck you'll have to wait for someone to come by and dig you out."  To be sure the information is brutally current the affable Park Ranger states,  'Rain is predicted later today which will convert the road to impassable slippery clay'.  Not overly reassuring.

Obviously, the only reasonable alternative is to take Hwy 89 the long and less scenic, but more reliable way around.