Still tired from the Forget-Me-Not Mountain ascent the previous day and from Calgary's HAWKS police helicopter interrupting sleep by circling overhead at 3:30 AM the 4:20 AM start is challenging and the the day's mission begins with less than optimal rest.

The drive west from Calgary into Banff National Park begins in the dark and the sunrise gradually reaches the front range of the Rocky Mountains.  The summits of Mount Rundle and Cascade Mountain are illuminated in orange light.

At the Town of Banff, the turn north from the TransCanada Highway begins the uphill drive on twisting road up the side of Mount Norquay to the trail-head for Cascade Mountain past the Mount Norquay Ski Lodge. 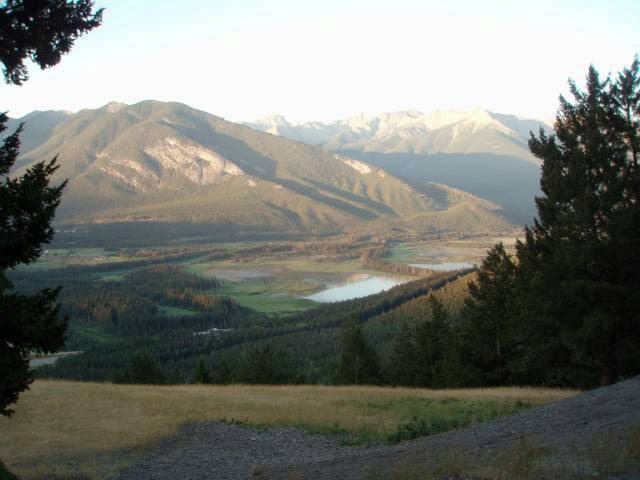 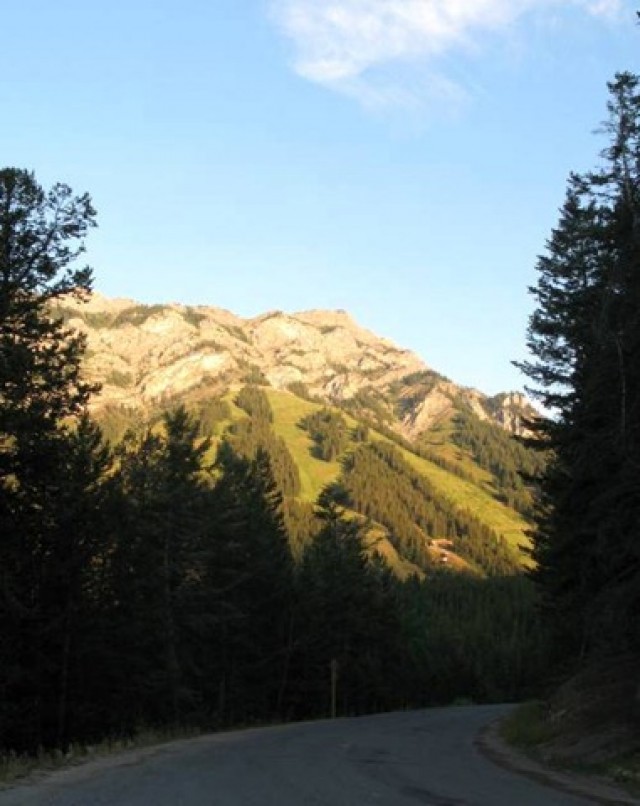 The hike to the end of the road through the Mount Norquay ski area finds trail on the right beginning behind Mystic chairlift, which initiates the hike downhill to the bottom of the valley.

The short hike along Forty-Mile Creek and across the bridge onto constant grade, switch-back trail begins the ascent to the Cascade Amphitheater.  On the recent reconnaissance mission, the remainder of the climb appeared straightforward.   Not so much.  There is adventure in the wind. 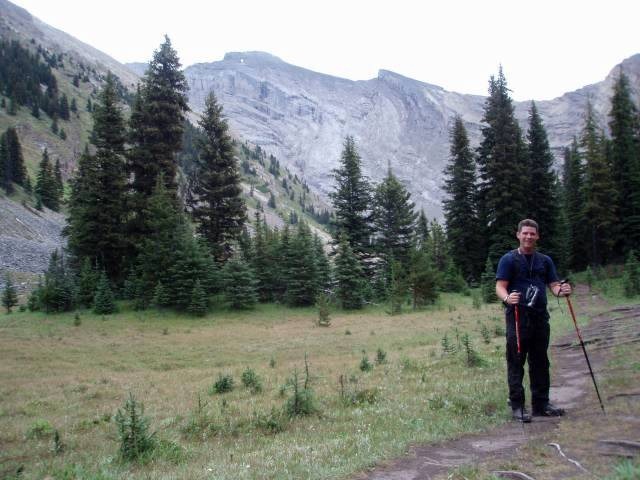 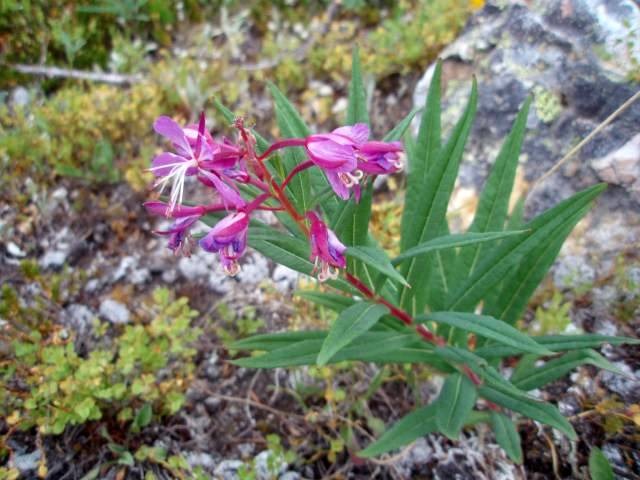 Cascade Mountain is a deceivingly large mountain.  From Banff Avenue, in the Town of Banff, its presence is formidable and from the Cascade Amphitheatre, which is a huge bowl canyon behind the west side of the summit, the ridge route to the summit appears reasonable.

After scrambling up the rocky trail from the amphitheater to the ridge, marmots monitor our progress along the ridge and soon the treeline is surpassed above 2,438 m (8,000 feet). 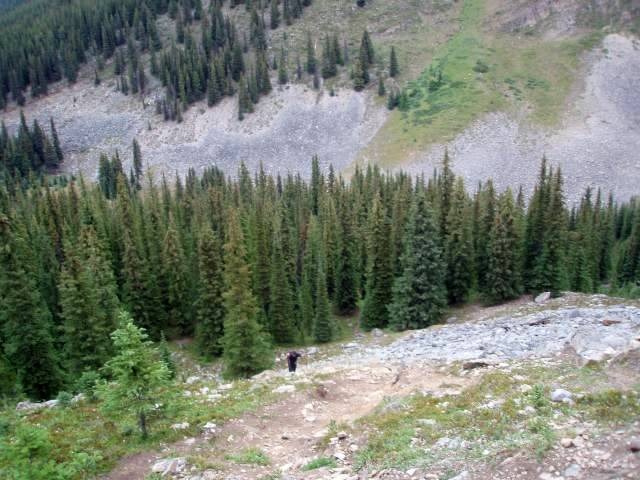 Initial focus is on the false summit in the distance which precludes the final bid for the true summit.  The weather is close to perfect for hiking.

After an hour of intermittent hiking and scrambling along the ridge line, with big air to the immediate left, the false summit appears no closer than when the hike from the amphitheater began. 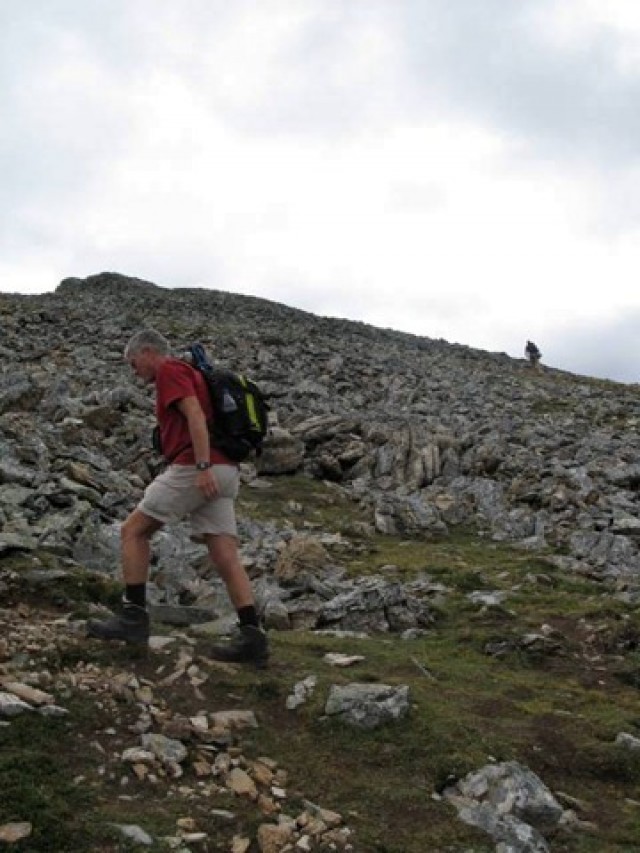 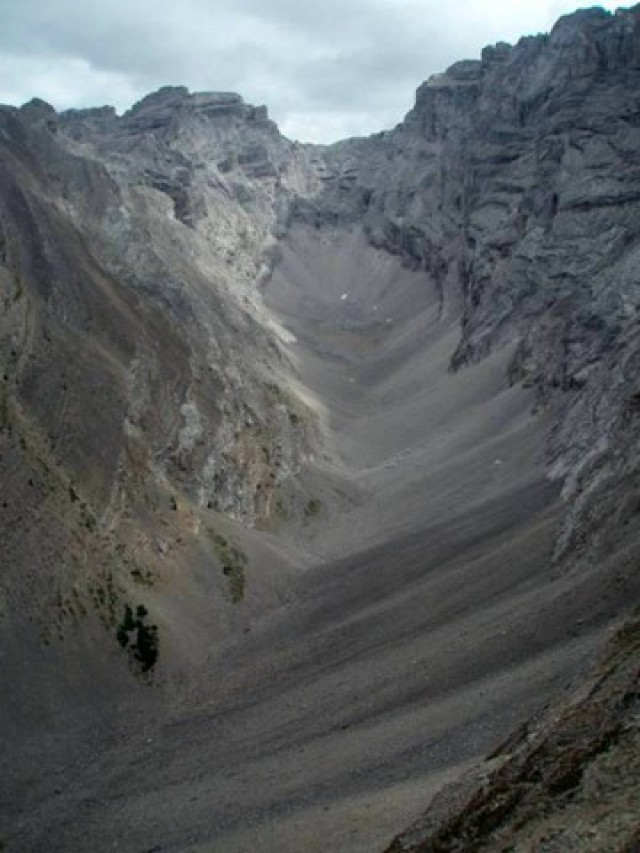 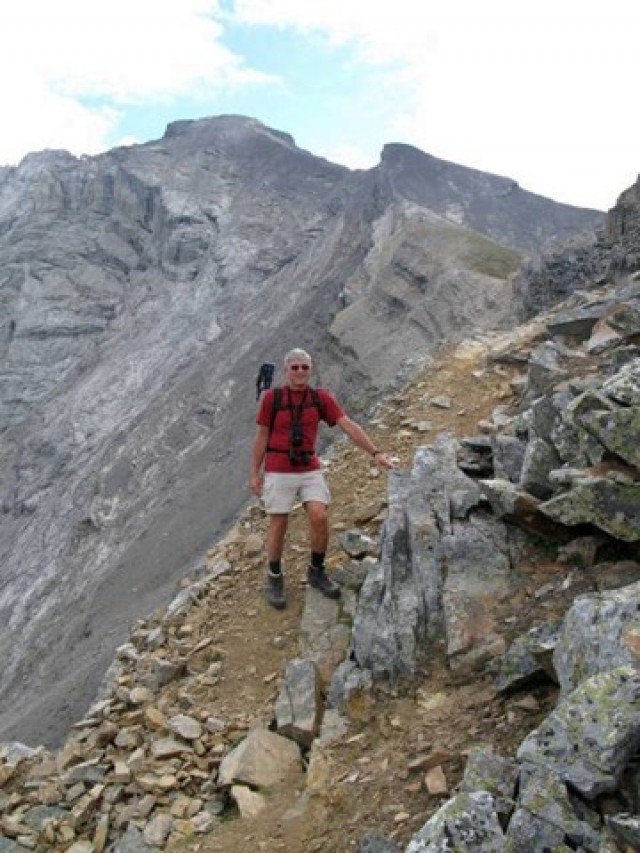 Along the route there are four main obstacles to be negotiated.  They are: the first peak, the hidden notch, the false summit and the main summit.  After an hour and a half of hiking the ridge the slog begins up the steep slope of the first peak.

The first peak is larger than expected and at the top, the far side reveals a 30 m (100 foot) easy scramble descent back down to the ridge.  The hidden notch is, well, hidden, but it involves a series of easy scrambles down shallow cliff faces to pick up the detour around the false summit. 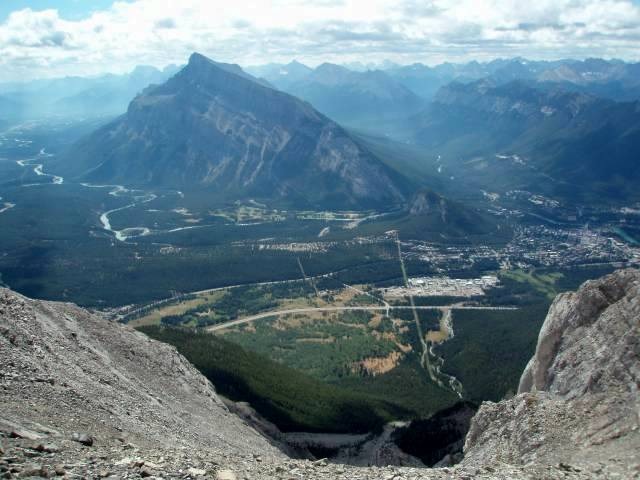 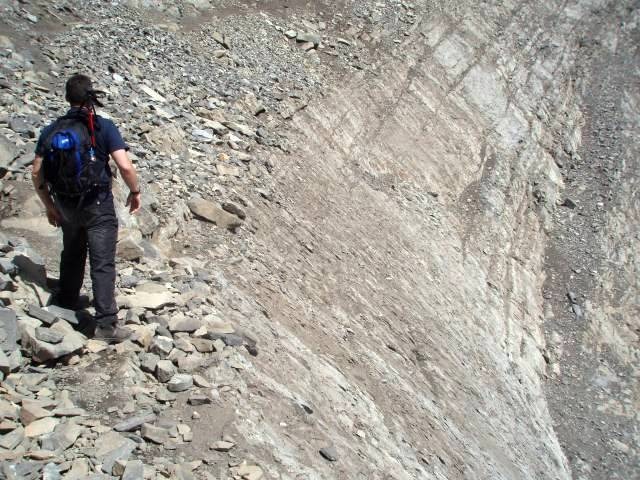 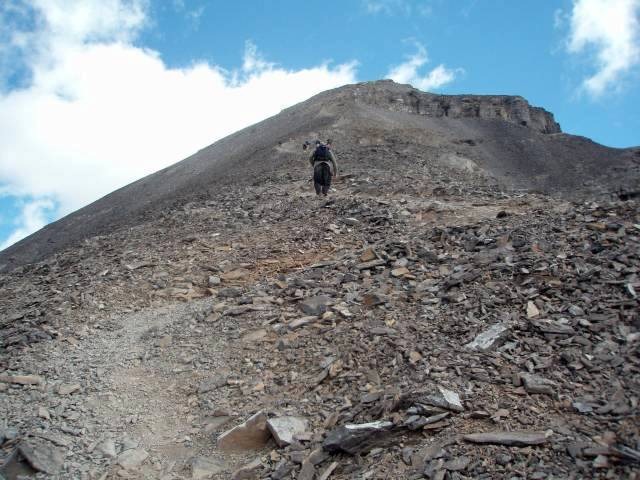 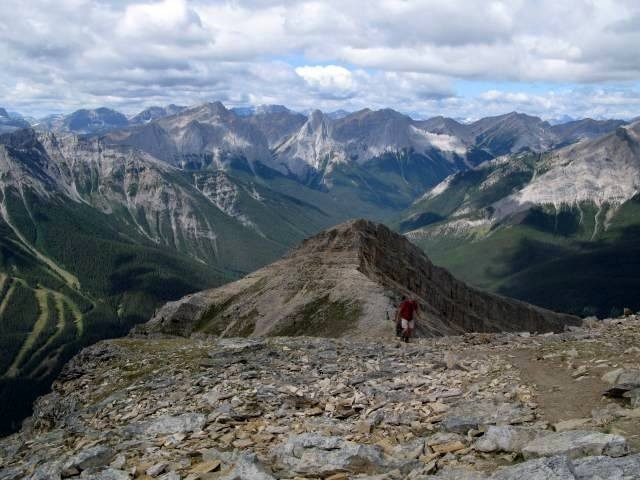 Route finding is an issue.  This mountain is a very popular hike and today is no exception.  There are many others on the mountain ahead of, and behind us, on this holiday Monday.  Past traffic has created a labyrinth of paths which intersect with game trails that lead nowhere passable.

Learning quickly to ignore these false indicators, the approach to the mountain is regarded as new ground where the route is carefully, analytically and mutually decided.

This works better, although, there are still incidents of getting into places which require backtracking to find an alternate route.  About four and a half hours into the hike a short descent is negotiated before hiking across and up the other side of the hidden notch where the false summit looms large ahead. 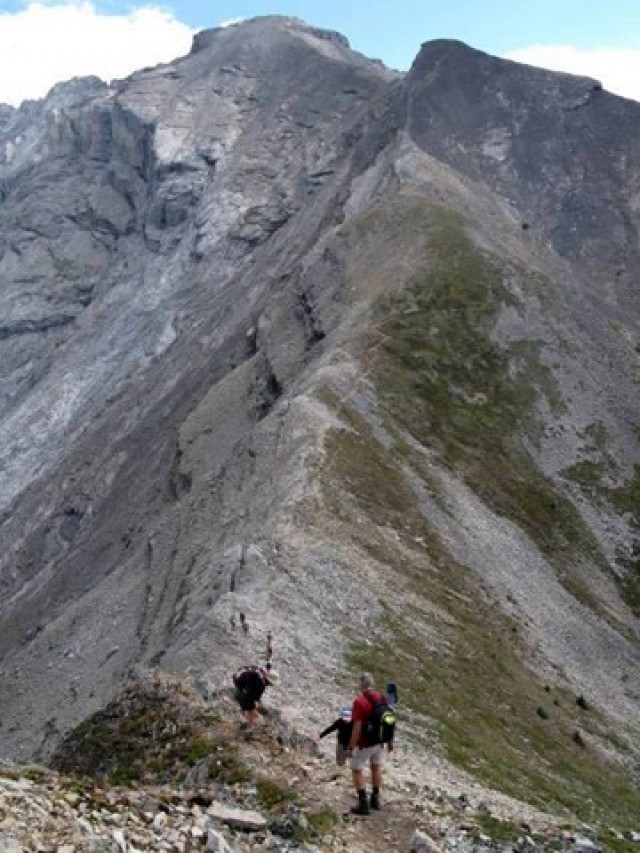 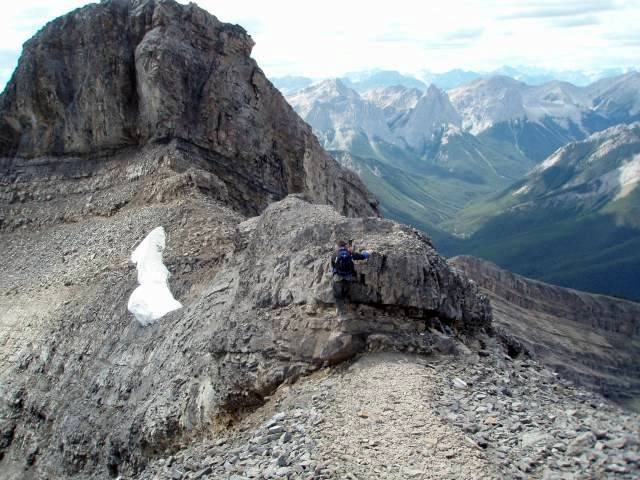 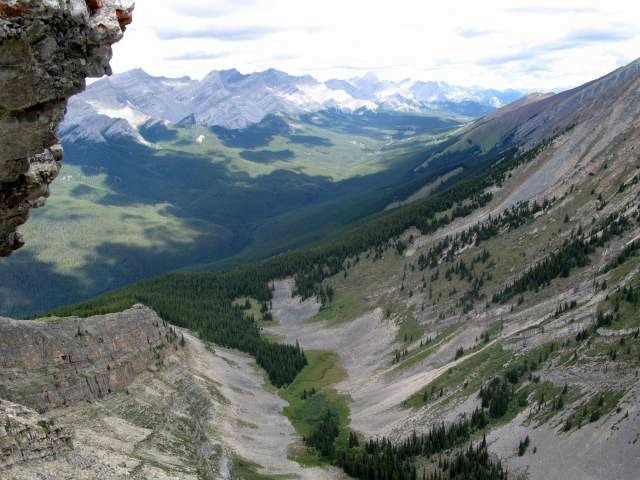 The path to circumvent the false summit edges horizontally along the edge of a steep slope.

During this section the true summit is completely hidden from view.  Vistas of the Town of Banff are breathtaking.  Mount Rundle seems dwarfed in the distance. 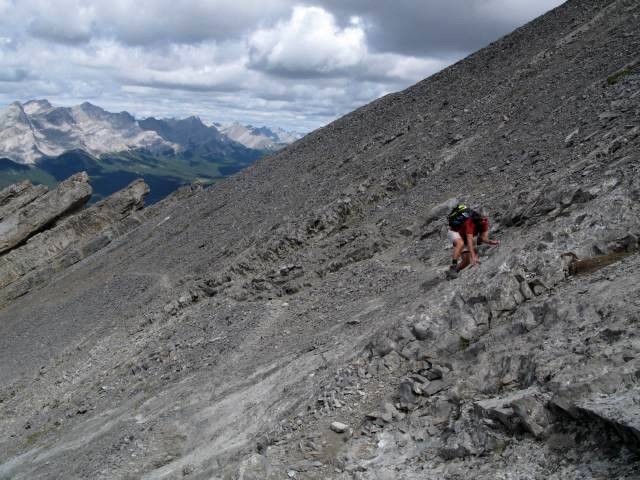 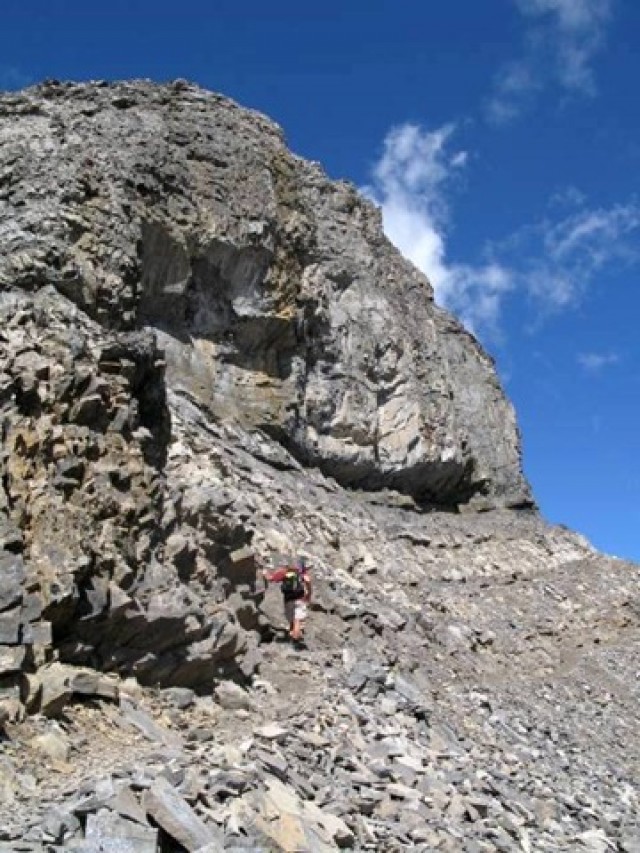 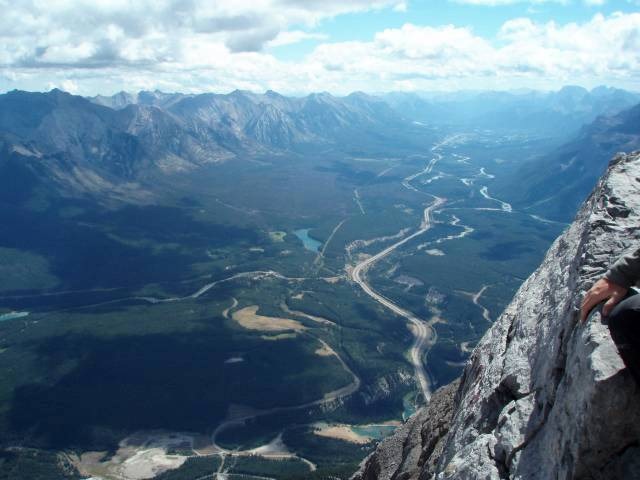 Fortunately, the day is dry and sunny.  This would not be a safe place on wet rock or snow.  On the way around the false summit there is one area following a brief vertical scramble where a smooth, steeply inclined rock slab must be traversed.  The slab is only about 3 m (20 feet) wide but there is little room for error.   Careful attention is exercised and the crossing proceeds without incident.

The steep climb ahead is a mixed easy scramble on rock and scree.  The ascent requires an additional hour of hard, occasionally frustrating labor to complete the final approach to the summit.  Increasing afternoon wind is becoming an issue as well.  The hike continues to the top and a drop over the edge to a little cove provides shelter from sun and wind on the quiet side of the mountain. 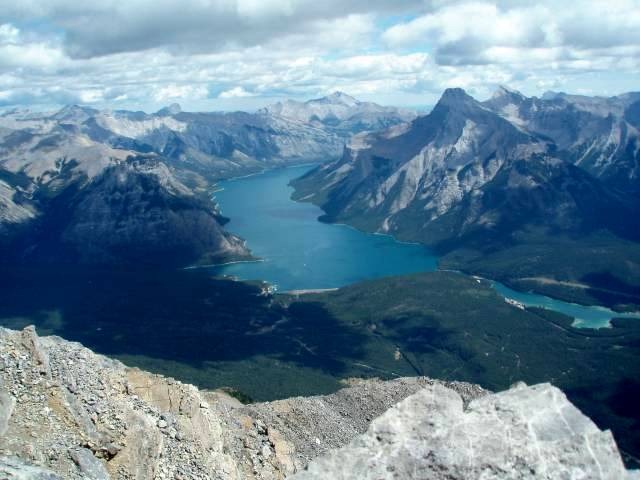 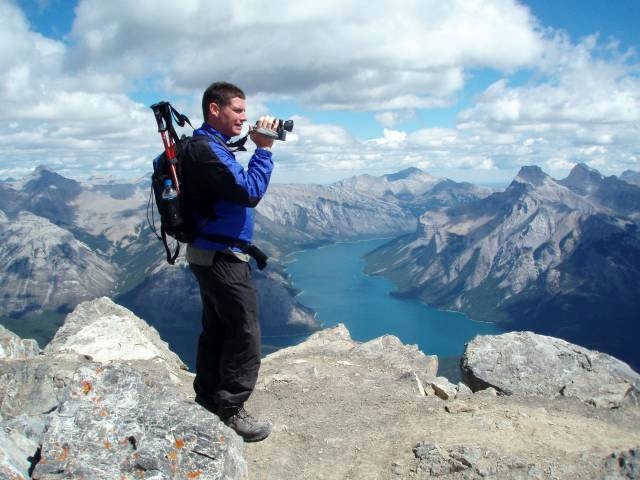 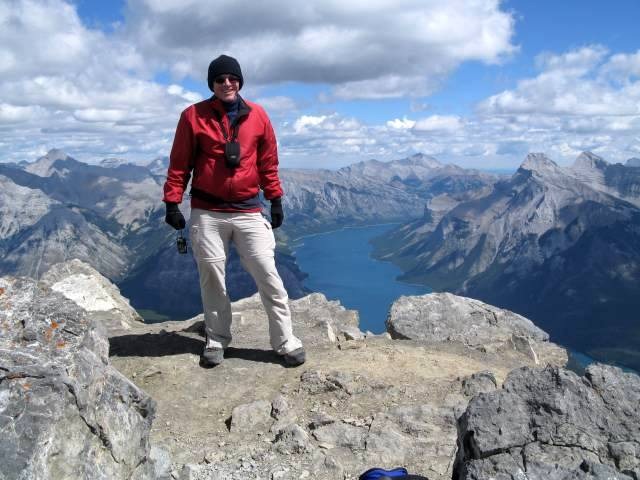 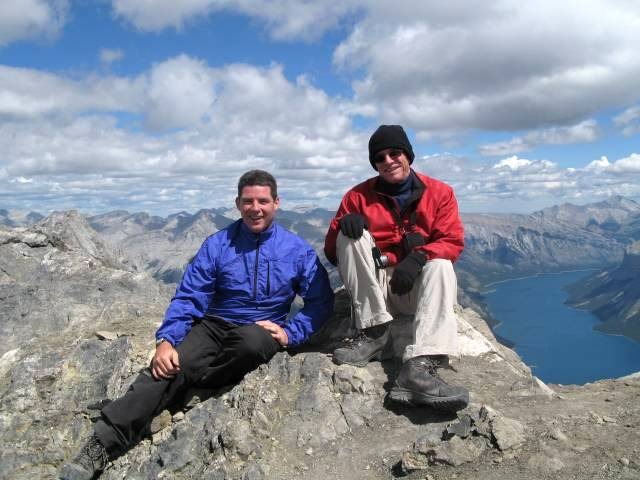 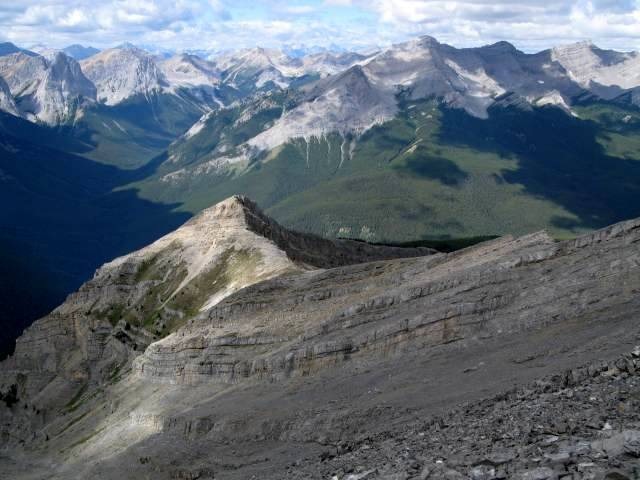 Time is taken at the summit to enjoy the top of the mountain and the incredible views that surround it.  Lake Minnewanka is directly below and appears larger than expected.  Pictures are taken to document the achievement.  Cascade Mountain is only one more in a growing list accumulated over the past three decades.

Chilling wind at the summit provides the motivation to return to the protection of the ridge where the descent requires layering down into a hot day.  Footsteps taken by tired legs are cautious on shifting scree and the down scrambles off the true summit are performed carefully with precision to avoid injury.

Occasionally, separate scramble routes are taken to avoid knocking rock down onto one another.  The return trip around the false summit is no less intimidating than the hike in.  There is not much edge here. 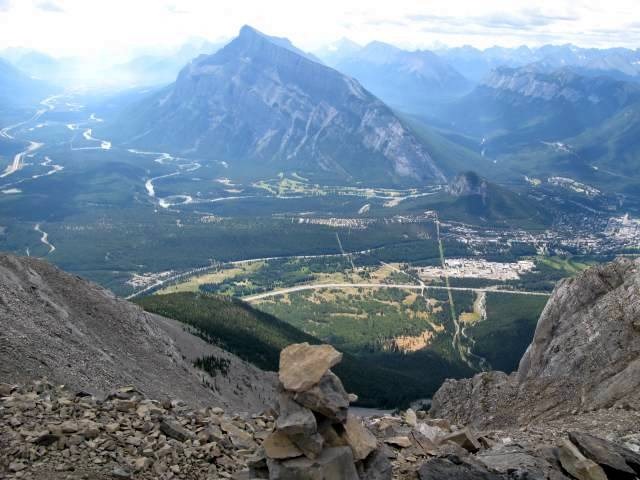 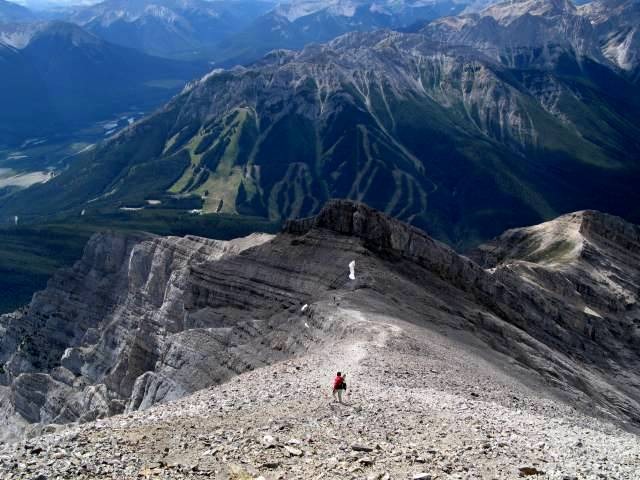 Scrambling back up and out through the hidden notch is straightforward.  On the ridge descent to the first summit the option to circumvent this obstacle is taken by hiking off-trail across a kilometer and a half of frequently unstable talus.

Continuing down the ridge and back into the tree line, the objective is to remain vertical and optimistic.

Each of us is exhausted from lack of sleep and the previous day but it is not up for discussion, although there is reminiscence about the experience ascending Fortress Mountain in August of 2002 which completed in similar conditions late in the day. 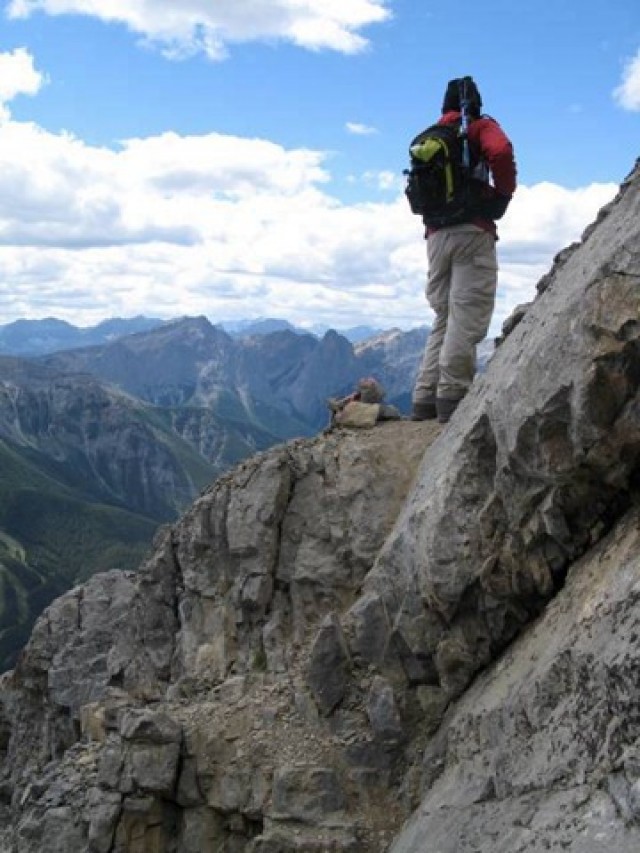 Dropping into the valley, the final push from Forty-Mile Creek uphill to the ski lodge seems longer.  Hiking poles and upper body strength compensate for spent legs.  At the parking area, changing quickly into fresh clothing and footwear improves disposition and the focus becomes the enjoyment of food and beverage in the Town of Banff to celebrate the day's achievement.

The return to Calgary is superceded by a soak at Banff Hot Springs in 41 C water to relieve tired muscles.  The expectation was that Cascade Mountain would be an easier ascent than Mount Rundle.  In retrospect, it was not.  The two experiences are very different and individually unique.  Cascade Mountain is deceivingly large.  Scale and distance are more difficult to assess.

The scenery is absolutely spectacular.  Cascade Mountain is an excellent choice for well-equipped and experienced hikers.