The Pod is an impressive coal mining hike in Crowsnest Pass, Alberta, Canada.

Access to the Pod may be sealed off.  Exercise due diligence before beginning this hike. There are plenty of other excellent hiking opportunities in the immediate region.
Every year during the Rum Runner’s weekend in Blairmore, Alberta, Canada there is a fireworks display called ‘Thunder in the Valley’.  On a July Saturday night, the show begins at 11 PM with 60,000 people in attendance.
You have not experienced fireworks until you hear them in a valley surrounded by tall mountains with accompanying rock music.  The presentation is very powerful. 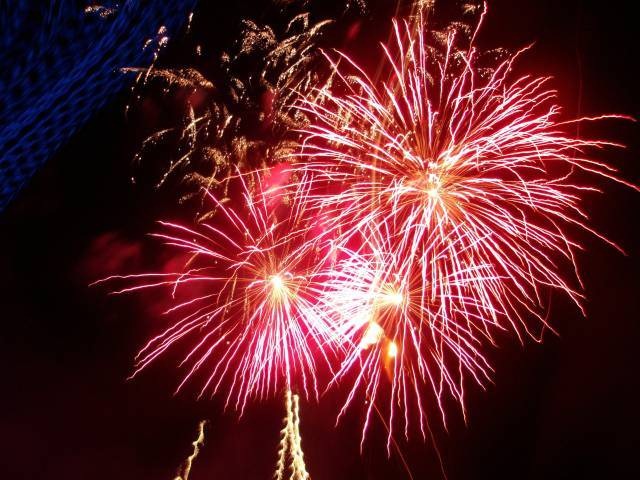 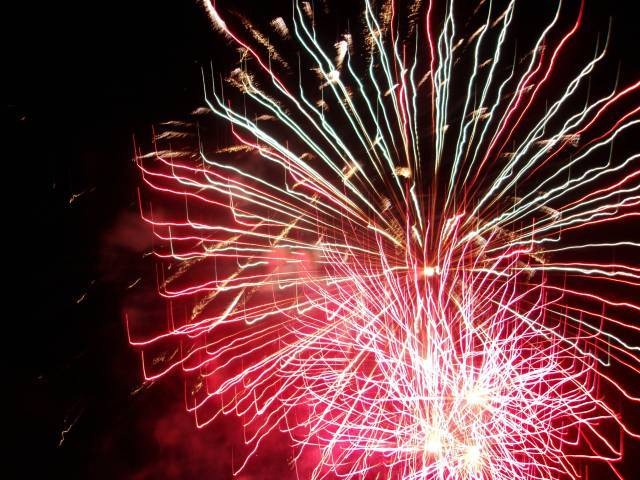 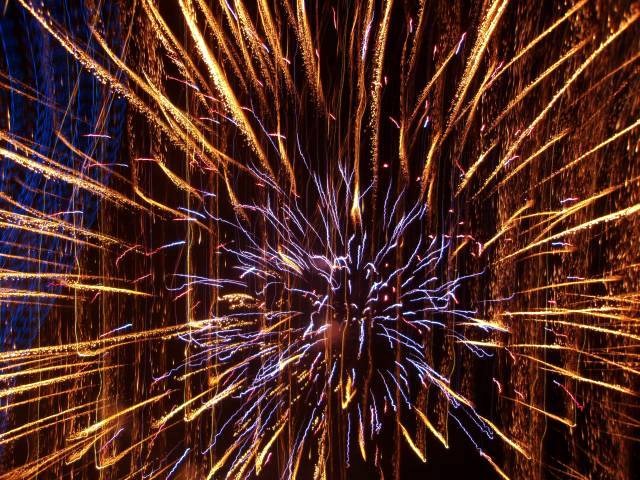 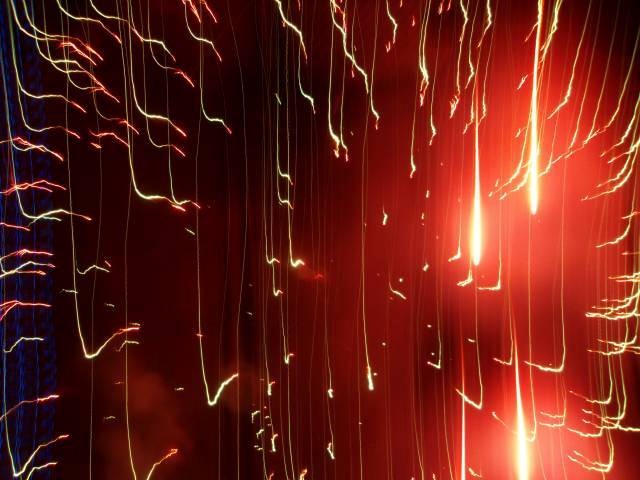 In 1947, West Canadian Collieries undertook open-pit mining on Grassy Mountain to supplement and offset more costly production at the ageing Greenhill and Bellevue Mines in the Crowsnest Pass.
As mountains are created, layers of rock, including coal seams, are buckled and contorted.  Normally underground mining is required to remove the coal.  When the coal seams are close to the surface, drag-lines, graders, shovels and trucks are engaged to first remove surface soil and rock, and then to work the coal seams for transportation by truck to the tipple at Greenhill in Blairmore, Alberta, Canada.
There were four major coal seams on Grassy Mountain, accessible by open-pit mining.  Of the four, the # 2 seam was the most spectacular where ancient geological forces, through repeated faulting and folding, had developed seams, normally 6 meters thick, into deposits 25 meters deep.  West Canadian Collieries closed all of their mines in 1957 when markets for coal collapsed. 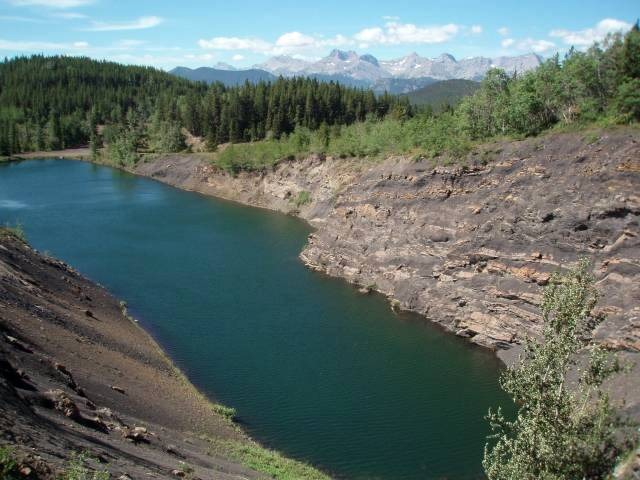 The objective on this very windy and sunny day is to visit the 'Pod' (aka the 'Big Show') near the top elevation of 2,065 m (6,775 ft) on Grassy Mountain in the Crowsnest Pass, Alberta, Canada.
Along the way is a short hike to a site overlooking a beautiful, very deep lake at the bottom of a long canyon created by open-pit mining more than a half century ago. 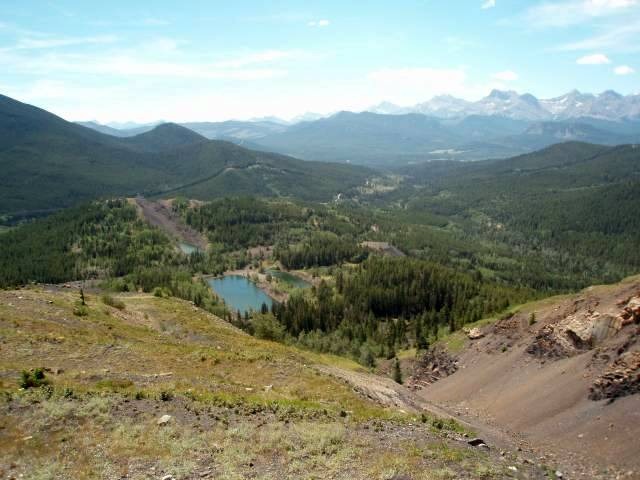 After navigating the car cautiously up the mountain and gaining elevation rapidly on tenuous, washed-out, four-wheel drive road the 'Pod' becomes visible high on Grassy Mountain.  Less than a kilometer into the hike, the remnants of the open-pit mine lead to the top of the mountain over dusty, black scree.
Hiking up the steep, V-shaped canyon, created by the extraction of coal, deposits of carbonized forests are still evident in the colorful walls of the open-pit.  Tons of the high quality, pure black coal is scattered everywhere. 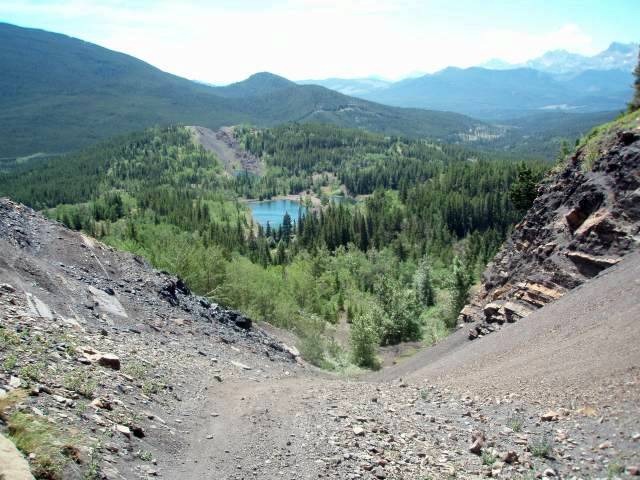 At the top of the seam, open grassland with sparse groves of stunted poplar and thousands of struggling raspberry bushes dot the landscape.  From here, access to ‘the Pod’ is easy across a kilometer of level, terraced and grassy hillside.
On the way, a herd of seven adult deer with fresh, gleaming, rich brown summer coats, watch carefully for a bit, then scurry to a more private location.  Strong and gusting wind is normal in the Crowsnest Pass. 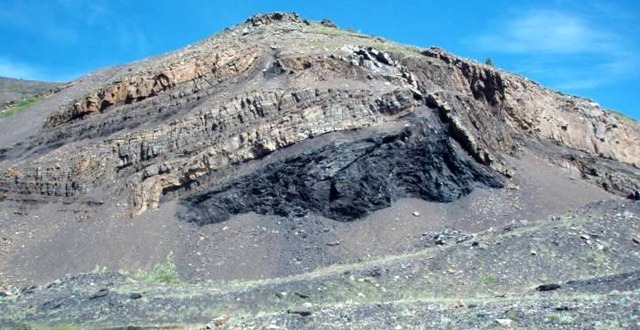 Arrival at the 'Pod' provides spectacular views of surrounding mountains from Waterton Lakes National Park in the south to Kananaskis Country in the north, and British Columbia to the west.  The Livingston Range blocks views to the prairies.
The number 2 seam is huge.  Scattered mining debris is still in evidence, however it has been largely vandalized over the years and reduced to piles of shattered lumber.  The rock face and remaining coal deposits provide clear proof of the powerful forces of nature.
Rock and coal layers are bent at extreme angles and layers of coal are folded over one another.  The summit is within easy reach but the strong breeze makes a case to be satisfied with shelter while discovering and exploring this old mining site. 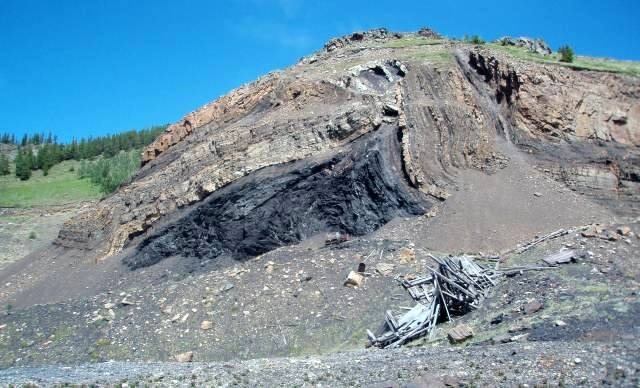 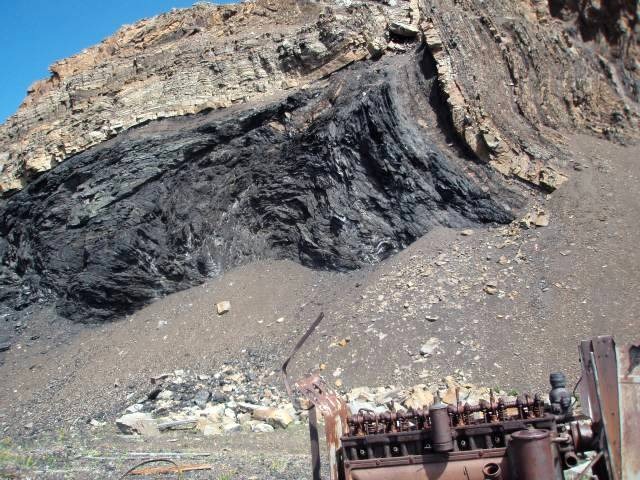 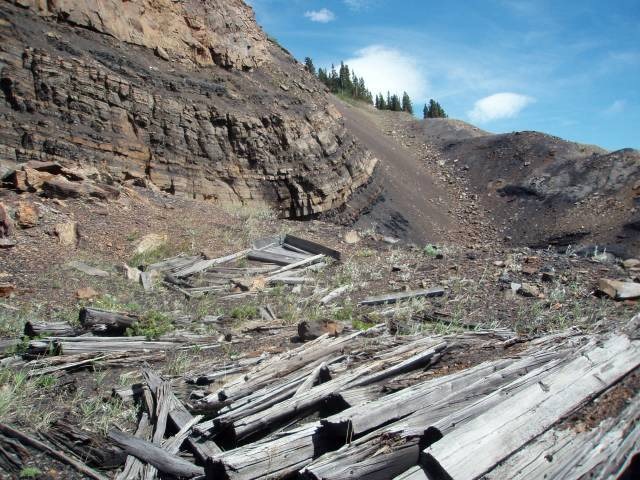 Propping up the camera to capture a self-portrait gives scale to the 'Pod' which is an impressive geological feature.

My presence in the photo provides scale.
Photography is a challenge in the gusting wind.  Occasionally, just standing up requires the need to brace and lean into the wind.  The return to the car is achieved by hiking on ridge alternatives.
This hiking day has been a relatively low effort, high reward day to observe unique geological features and phenomenal scenery combined with a ten year supply of fresh air.