The objective this day is an ascent of 1,382 vertical meters (4,535 ft) over 3.1 KM (1⅞ miles) to the north summit of Turtle Mountain in the Crowsnest Pass, prior to the scramble across the top to the 2,109 m (6,920 ft) true summit.
Hikers with limited or no scrambling experience would be well advised to seriously limit their exposure to conditions at the top of his seriously damaged mountain and it is advisable to be part of a group of at least three with substantial hiking experience.
In the event of an injury there is one to stay and one to get help.  Sensible practice.  Present day electronic communication and location technology may also help. 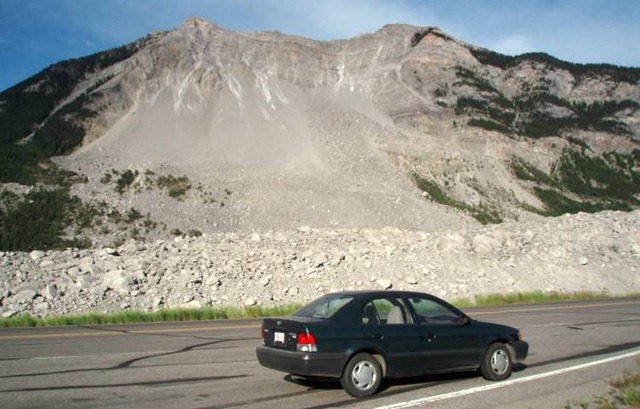 The 2 1/2 hour drive from Calgary to Crowsnest Pass is under moody skies heading towards a large storm in the southwest, with clear skies under a full moon to the east.  The drive south on Hwy. 22 is beautiful between the crests of breeze-rippled grass fields, tinged orange by early morning sun.
Rolling green hills are backed by mountain ranges in the distance and the foreground is punctuated by endless fields of fluorescent yellow canola.
Further south, the long, thin Chain Lakes are dotted with a few small boats pursuing the morning catch of fresh fish while the rolling hills of the Whaleback provide a dramatic backdrop.  The drive is through prairies and foothills to mountains near the Alberta - British Columbia border in the southwest corner of Alberta. 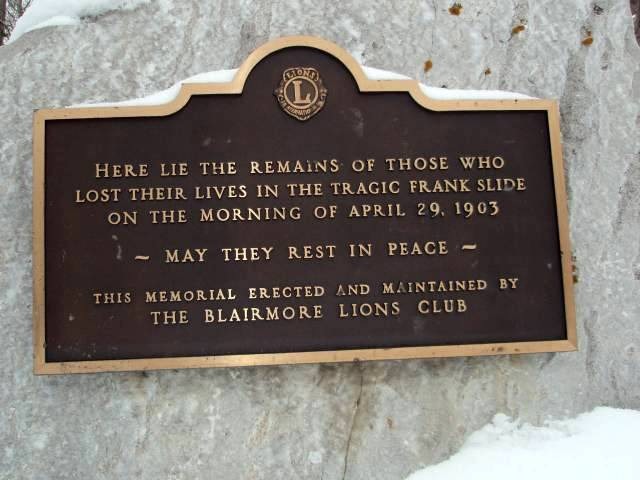 A Blairmore residential community hosts the trail-head for the summit of Turtle Mountain.  There is wisdom in checking in at the Frank Slide Interpretive Center for instructions and/or changes.
The steep, rustic trail can be rugged with rolling rock underfoot.  Elevation to the top of the approach ridge is rapid and exhilarating.  With an early start it is possible to reach the north summit mid-morning with no evidence of anyone else on the mountain. 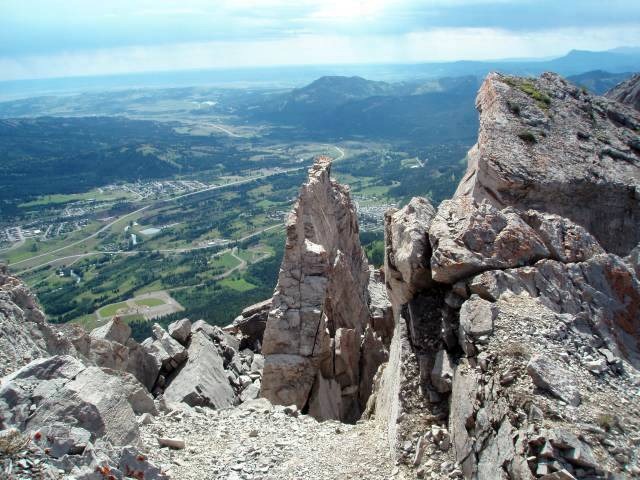 There is a phenomenal 360 degree view of town-sites in Crowsnest Pass plus surrounding mountains and lakes.  The seismic and weather monitoring gear is clearly visible on the adjacent summit about a kilometer (⅝ miles) away.
The summit hosts a Canadian flag wafting in a shallow breeze.  The most amazing feature is the shattered and fractured rock terrain between the two summits.

The top of Turtle Mountain is laced with huge fractures and fissures.  On the other hand, this is scrambling heaven guaranteed to provide a rugged and amazing experience. 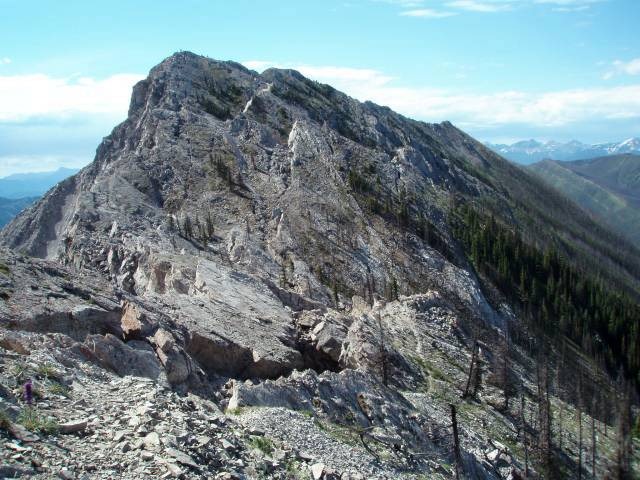 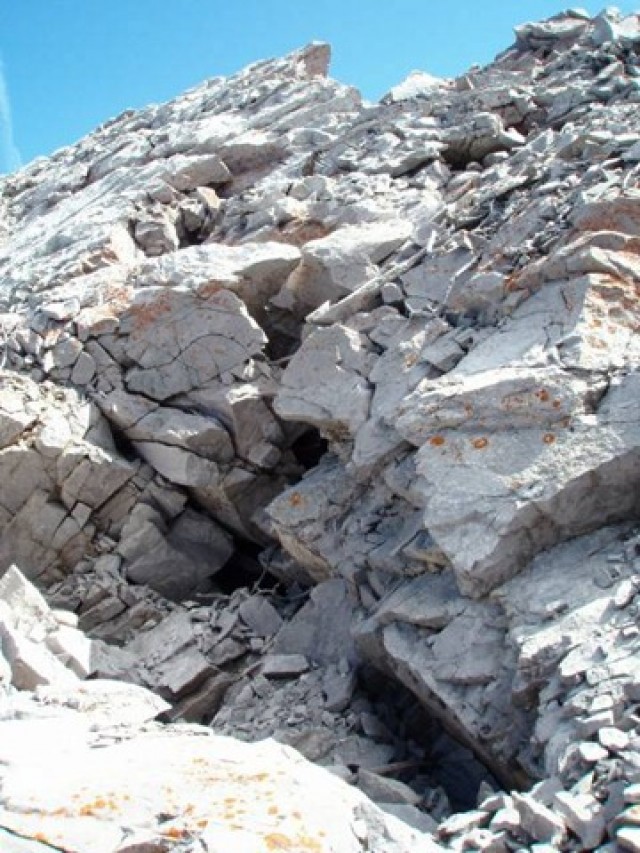 The initial down-side scramble off the north summit grabs the attention.  There are no markers, trails or footsteps.  There is only jumbled and fractured rock.  Visibility is often limited to a few feet ahead, blocked by massive boulders or rock outcroppings.  The physically and mentally challenging experience is like navigating a giant maze. 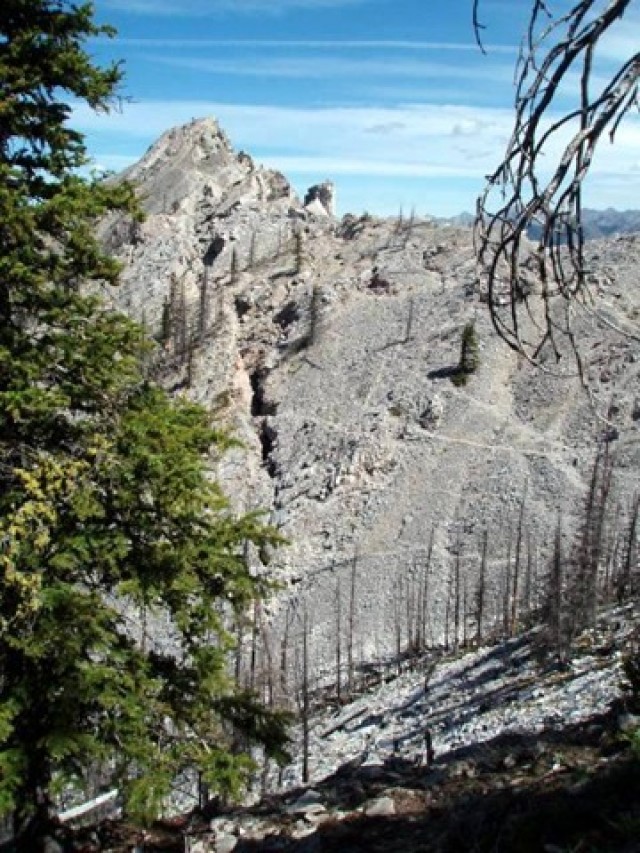 In the two hours spent scrambling between summits, there is the opportunity to explore as many of these vertical caves and canyons as possible.  About half-way across there is a scramble directly to the brink of the precipice overlooking the devastation and remaining debris of the Frank Slide.
The dramatic photograph looking straight down into slide zone requires lying stomach down on the rocky precipice and crawling to the edge for an amazing view of the massive Frank Slide.
With feet anchored, it is possible to ease over the edge and, with arms outstretched, photograph the debris field created on April 29, 1903, when a third of the old town of Frank was obliterated in an instant.  The moment is both exhilarating and sobering.

More than seventy people lost their lives and many who could not be recovered remain buried in the rock fall.  In the photo, Highway 3 passes through the middle of the debris field far below.
The green-bordered Crowsnest River is clearly visible and the large Frank Slide Interpretive Center can be located in the upper-left corner.  Many of the larger boulders at 1,458 m (4,000 ft) below, are the size of houses. 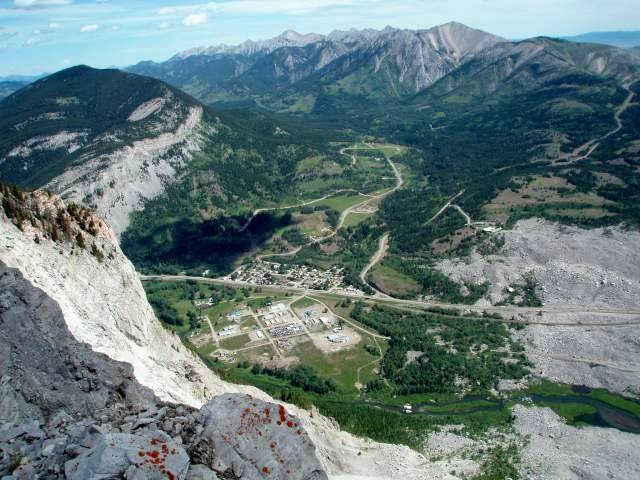 The final approach to the true summit is a steep, scree scramble.  Hand holds on adjacent rock outcroppings are required to sustain forward momentum.  The summit contains several stations of solar-powered scientific equipment to measure seismic activity and rock movement.
Many surface faults contain compression gauges to monitor changes in fracture width.  There is ongoing speculation the mountain may collapse again.  From the seriously damaged top, the potential seems possible.

At the pivotal moment, when preparing to raise arms in the traditional sign of victory, it cannot be ignored there is another south summit off to the right with additional monitoring apparatus and a helicopter landing pad.
This additional summit is not far away, maybe a half kilometer as the crow flies, but getting there is going to be a battle.  It remains uncertain which is the true summit, and leaving is not an option until this adjacent summit is conquered.
So, the next step requires dropping off the first south summit, scrambling down about 150 M across rock and more fissures, then up another scree slope to the second south summit to prepare for the victory sign on the helicopter pad. 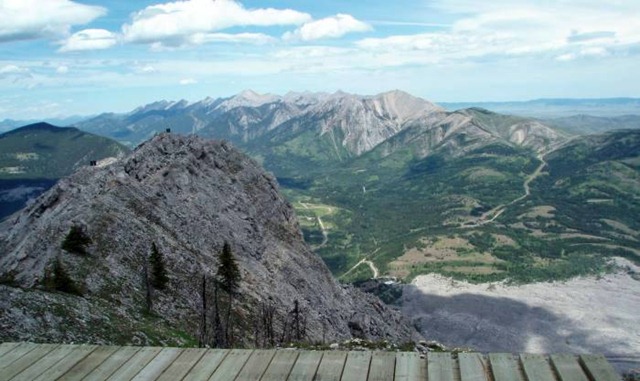 As arms are about to be raised in the traditional sign of victory, there is a third south summit off to my right with a cairn, which to me is a strong clue this may be the true summit.  Fine!  But this is absolutely the last south summit for the day.
The good news is a short, flat ridge hike that will deliver me to the cairn.  I look around.  There are no more potential summits.  Without doubt, the true summit of Turtle Mountain has been achieved and finally arms extend skyward in the traditional sign of victory. 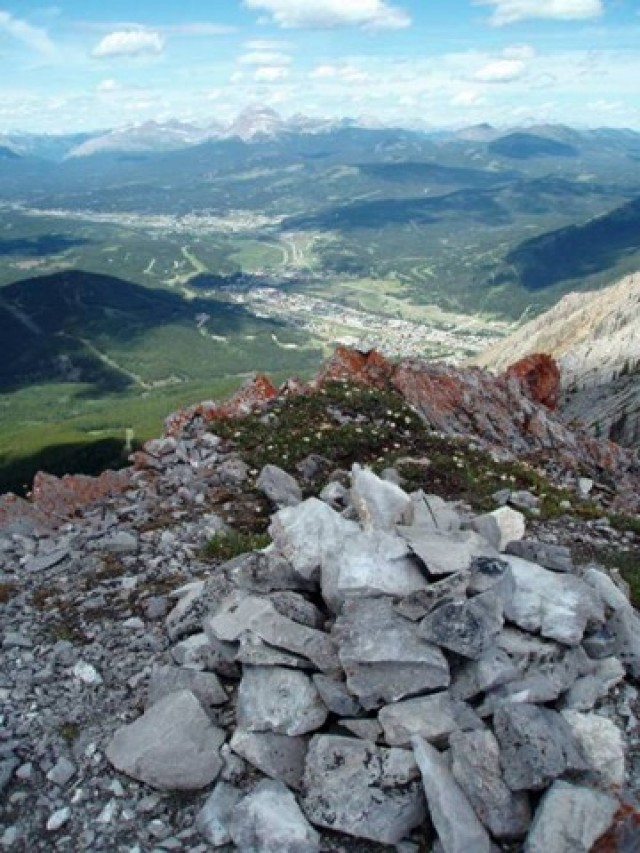 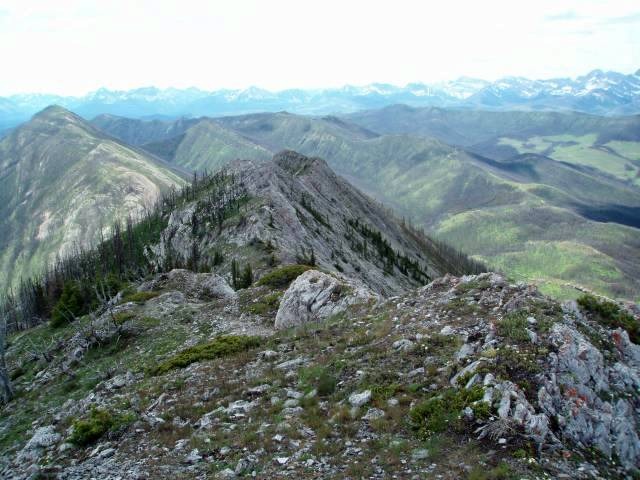 The north summit seems far away now and a decision to drop lower on the mountain for the return trip is a mistake.  The slopes become too vertical and loose scree makes navigation impossible.
There is no alternative to climbing back up to the top ridge line of the mountain to find a new scramble route back across the top.  At the north summit there is a 30 KM (19 mph) and building breeze from the west as lunch and hard-earned rest are enjoyed with marvelous views of Blairmore below, Coleman in the distance, and spectacular surrounding mountain topography.
Crowsnest Mountain, at 2,784 m (9,135 ft), stands prominent with Seven Sisters on its flank.  Within 20 minutes the breeze ramps up to an 80 kmph (50 mph) wind and prompts a rapid descent down the mountain for shelter in the trees.
The strong, gusting wind takes breath away and causes eyes to tear.  The rapid descent requires half an hour to get to shelter and another hour to return to the car parked near the trail-head. 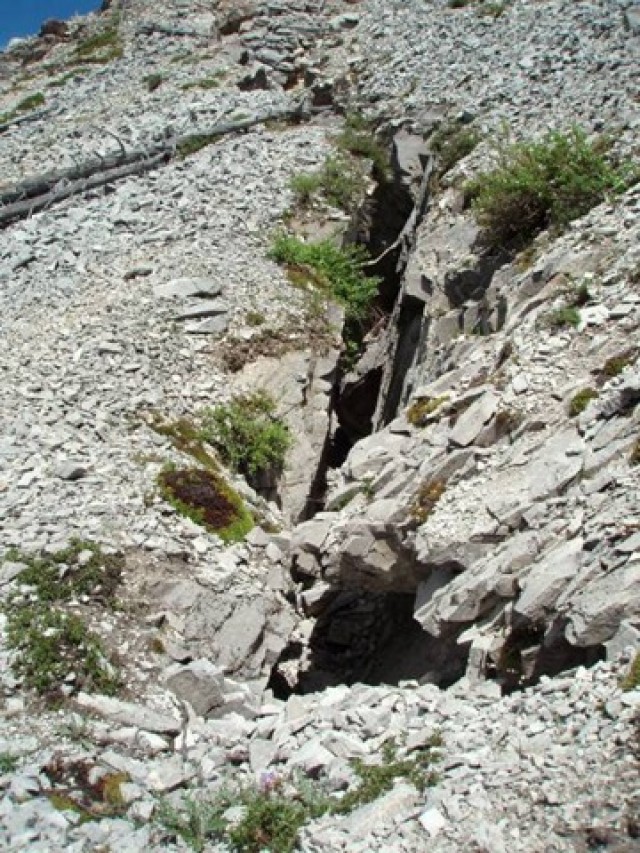 At the excellent Frank Slide Interpretive Center it is possible to purchase a hiking guide 'Hiking the Southwest Rockies' authored by Joey Ambrosi who happens to be there to autograph the excellent guide for a wide range of hikes in the south Rockies including Waterton Lakes National Park, Alberta, Canada.
Just to the west of Frank is the long abandoned Greenhill Mine and, to the east is the tour of the old Bellevue Mine.
In four hiking guides which feature Turtle Mountain, not one specifies which summit is the true summit.  Common innuendo indicates the summit with the flag and majority of measuring apparatus is the highest.  The uncertainty of the exact summit location is of no consequence to me.  I stood on all of them.