Crowsnest Pass is a special area ideal for hiking through Canadian history in Alberta, Canada.

Following breakfast in Blairmore, the drive west on Hwy 3 leads to parking at the closed-for-the-winter Alberta-British Columbia border Visitor Center near the east end of Crowsnest Lake.  The walk across the highway passes through the hamlet of Sentinel (originally Sentry Siding in 1909).

The scenery here is overwhelmingly beautiful and a multitude of birds are singing near the shallow, reflective shores of Crowsnest Lake.  This reasonably large lake is purportedly one of the deepest in the province.  Today's objective will be to hike around it. 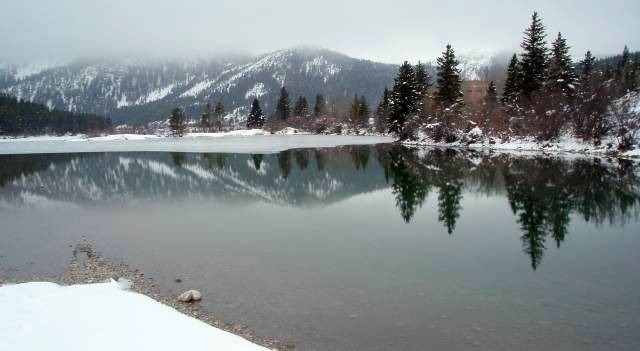 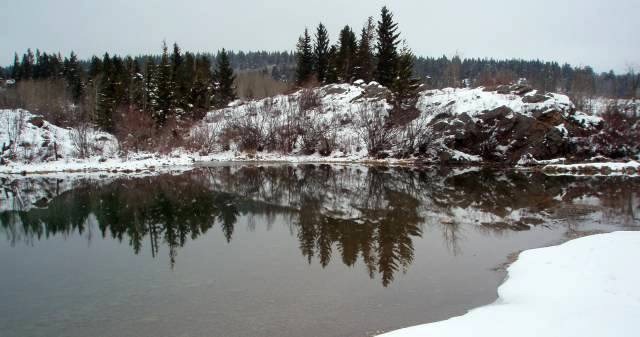 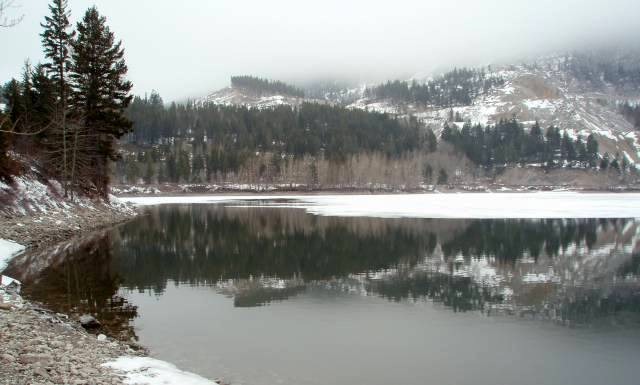 Driving west leads to the large parking area at the British Columbia end of Crowsnest Lake before hiking west along the highway until vacant land allows a potential route around the west end of the lake.

After considerable effort through deep snow in difficult terrain, there is discovery of a creek crossing too wide to jump across.  Bushwhacking back and forth along the creek in search of an opportunity to attempt a dry crossing yields no easy solution.  Ultimately rigging a log is attempted where the jump becomes remotely viable.  This does not go perfectly.

Hiking with one wet foot to the lake shoreline is followed by a short, steep scramble up and over the Canadian Pacific Railway mainline tracks which will become adjacent to the trail along the north shore of Crowsnest Lake. 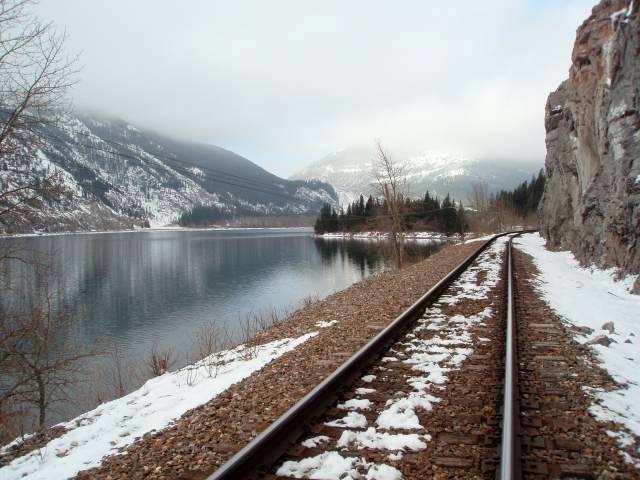 The hike is 7.3 KM (4⅝ miles) long at an elevation around 1,372 m (4,501 ft).  The walk is a lovely, flat hike in gorgeous scenery.  On the walk east along the railway tracks on the north side of the lake, clouds are beginning to drift up mountain-sides and sun is struggling successfully to evaporate the mist.

About half way along the lake there is a drop down from the rail bed to a creek that flows from a cave opening in the rock face.  This is the water source for Crowsnest Lake.  It is a short hike to the mouth of the cave.  Normally, the approach would be followed by a scramble up into the cave, where recent graffiti competes with historic Indian rock paintings (petroglyphs), but high water flow and surrounding ice make it unsafe today.  There is no-one around to assist in the event there is an injury.

Scrambling the right-facing rock face provides an opportunity for better photos of the mouth of the cave. On the way out, it becomes obvious I am being watched. 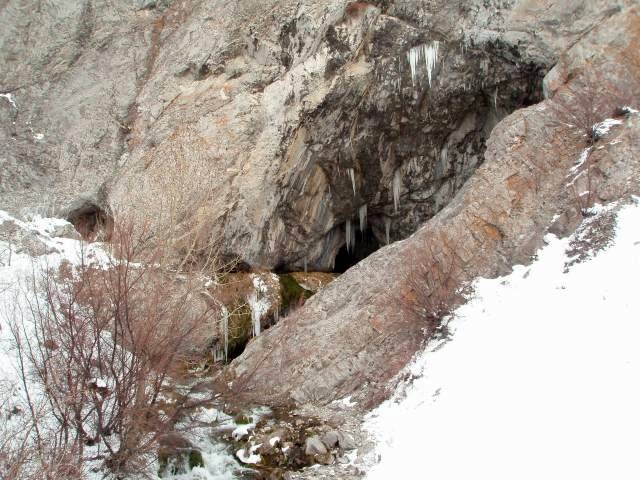 From the rail line, an adorable baby mountain sheep, with neck extended, is watching my cave exploration inquisitively.  Slow and silent movement will hopefully create the opportunity for a photo but Mom and Dad enter the scene.

On the ascent up onto the rail-line my furry friends have retreated a safe-distance up a nearby steep scree slope to wait for me to leave. 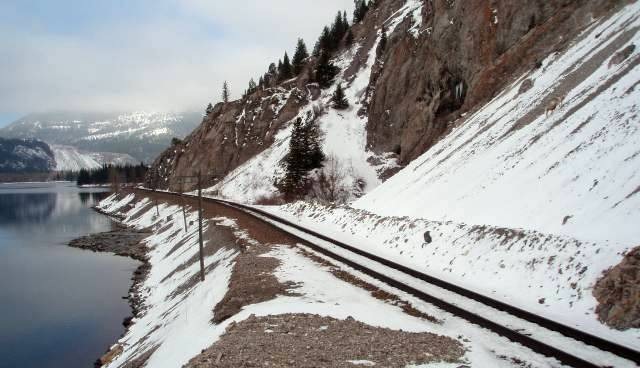 Approaching the east end of the lake there is a large, red brick building which is the long-abandoned East Kootenay Power Station.  The inner child desperately wants to explore the ruins but remaining on plan dictates continuing around the east end of Crowsnest Lake along the south shoreline via Hwy 3, through Sentinel, and back to the car.

The sun finally owns clear sky.  A few kilometers away, 2,730 m (8,957 ft) Crownest Mountain emerges from cloud cover.  Adjacent to this mountain is an imposing and impressive chain of peaks called Seven Sisters. 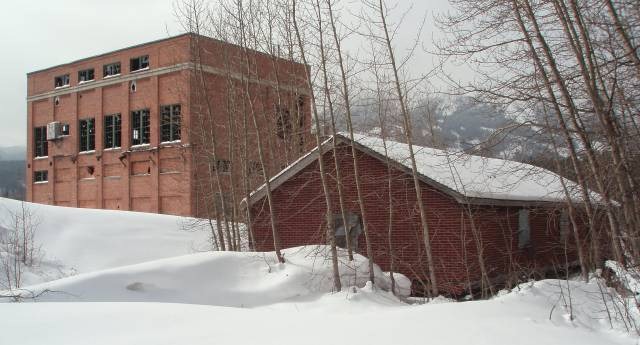 After lunch in Blairmore the hiking objective is the Star Creek Falls trail.  The access road is very muddy and rough.

The warmth of the sun has caused a lot of running water and mud is deep so walking in is the sensible thing to do.  The trail is obliterated with snow but it is straightforward to follow the creek.  Snow mounds and melting ice create fascinating sculptures.

Trail ends at the very beautiful lower rapids. A scramble up the steep, 100 meter slope of moss, buried under six inches of snow, is too slippery to climb, so it is necessary to use shrubbery and dead fall to assist the ascent.

At the top of the ridge a left turn leads to a small, snow-covered and precarious promontory.  The view of the frozen falls below is disappointing but facing the other way there are fabulous mountain vistas across Crowsnest Lake. 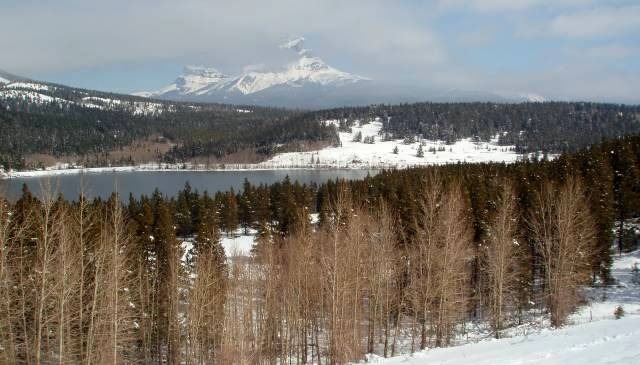 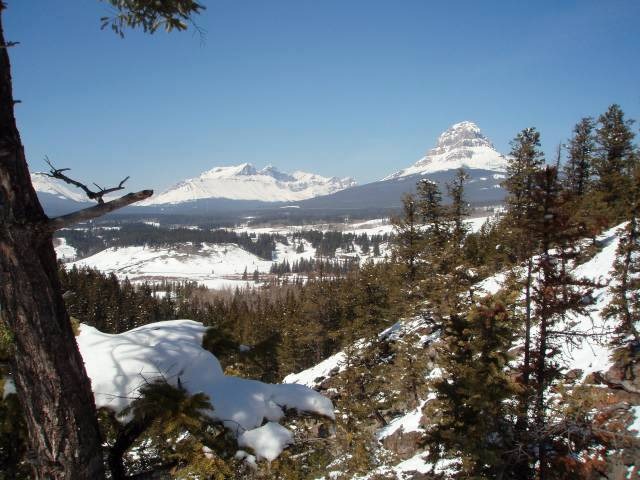 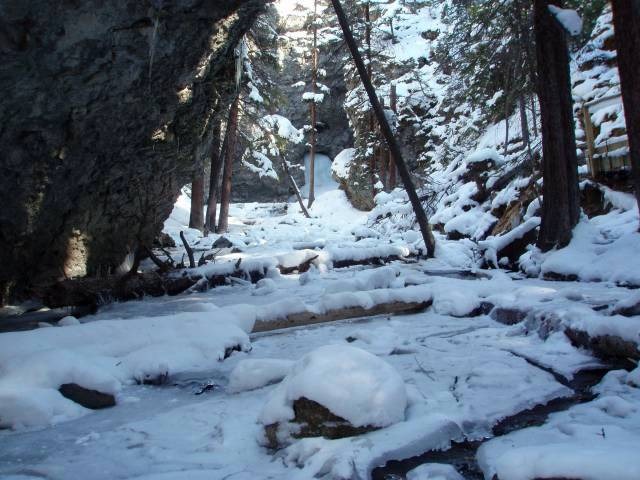 This short hike to Star Creek Falls finishes earlier than expected.  The abandoned remains of the East Kootenay Power Company are a five minute drive away.

At the entrance road to the abandoned plant, there is a spot to park near the large barricade.  The tour is a short, flat walk and there is no-one around so the opportunity exists to do a thorough tour of the entire facility including out-buildings.  The experience is like hiking through history.

In 1924 the plant changed from a temporary to continuous power source.  Two hundred tons of pulverized coal were used daily as fuel and the plant required 10,000 gallons of water taken daily from the lake to drive steam turbines.  The hill leads to long-abandoned houses, sheds and cabins.  Surrounding views are awesome.

Working the way around to the lake side of the facility finds most entrances sealed and locked securely but there is one old, unsecured door that is ajar just enough for passage.

The inside is gutted but interesting in its layout.  The boilers and generators in place are gone but their foundations fire the imagination of times past many years prior. 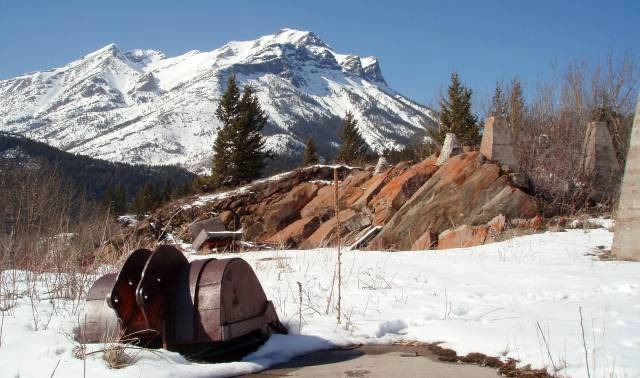 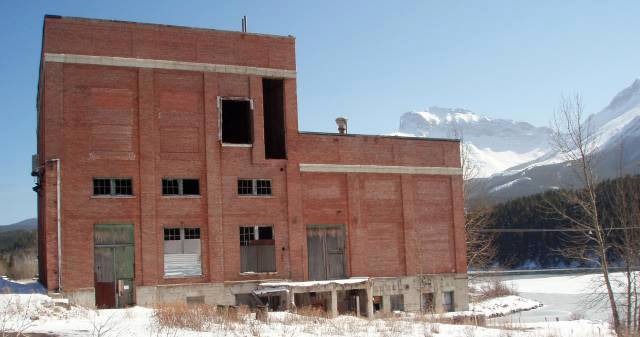 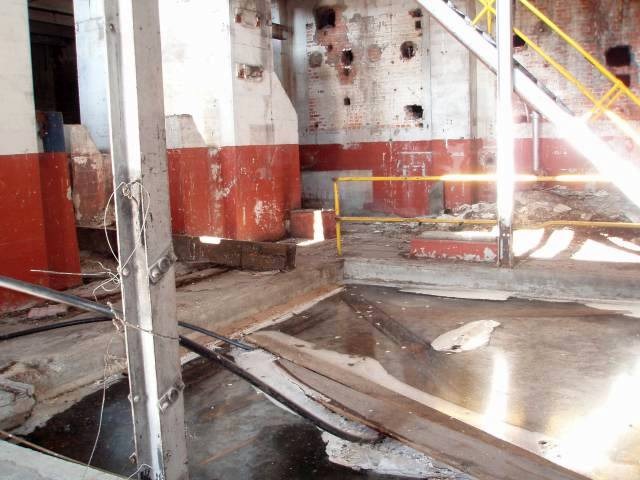 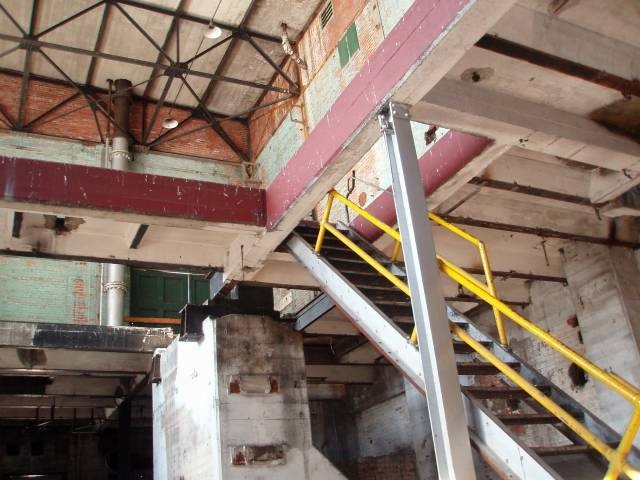 Time is taken to enjoy the warm sun and gentle breeze as well as the scenery and history of another era.  This plant at Sentinel was administered in later years by Calgary Power and eventually closed in 1969.  The property is now privately owned.

As always, departure leaves nothing but footprints.  All that is taken are good memories, good conscience and photographs.  Tragically, there has been quite a bit of vandalism at the historical site.

On the next day, due to continuing inclement weather, there is frustration original goals cannot be achieved.  A leisure day will be designated for the drive west to Sparwood in British Columbia and then south to Fernie where the sightseeing tour continues north through Jaffray, Wardner and historic Fort Steele. 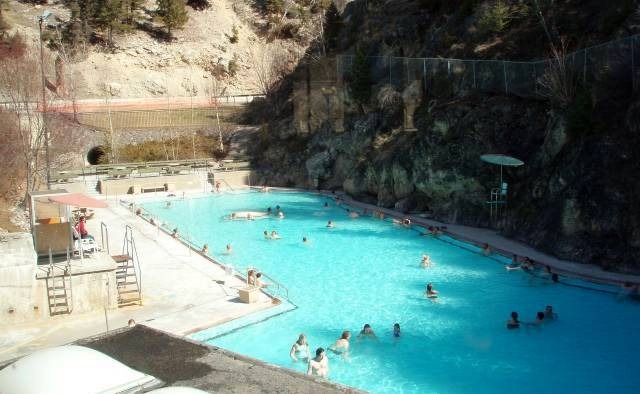 The Radium Hot Springs 39 degree C water is welcoming.  The Radium complex is much larger than Banff Hot Springs in Banff National Park, Alberta, Canada.  There is a hot tub at the end of the lower pool with direct feed from underground springs.  Here the water is hot at 42 C.  The upper lap pool is cooler at 30 C and very comfortable for swimming.  Sun saturates the pool and surrounding canyon walls.

Following a great soak and swim, it is a relatively short drive to Banff Hot Springs for the second soak and steaming of the day.  Banff Hot Springs is predictably busy.  Temperature is 24 C on the pool deck and it is heavenly to alternately sunbathe and dip in the hot springs at 39 C.

After the second good soak, the obligatory stop in the Town of Banff purchases a slice of Chocolate Grand Marnier fudge for the drive home to Calgary.  Decadence! 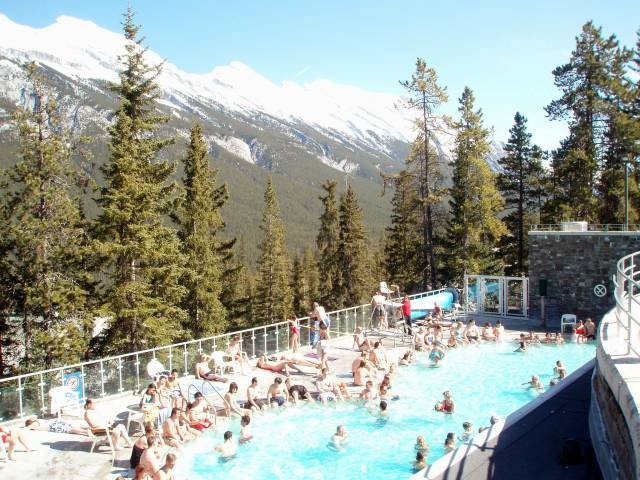