The drive from Calgary to Nakiska, on the flanks of Mount Allan in Kananaskis Country begins very early in anticipation of an easy and recreational ice climb.

This route of cascading ice falls is often used to initiate new ice climbers following a bit of conditioning and training on indoor climbing walls.  Calgary temperatures are comfortable at temperatures of minus 10 degrees C.

The spectacular, brilliant-crimson sunrise forms up beneath a well-defined Chinook Arch.  Parking is plentiful at Nakiska Ski Resort and the access hike to Troll Falls is short and flat. 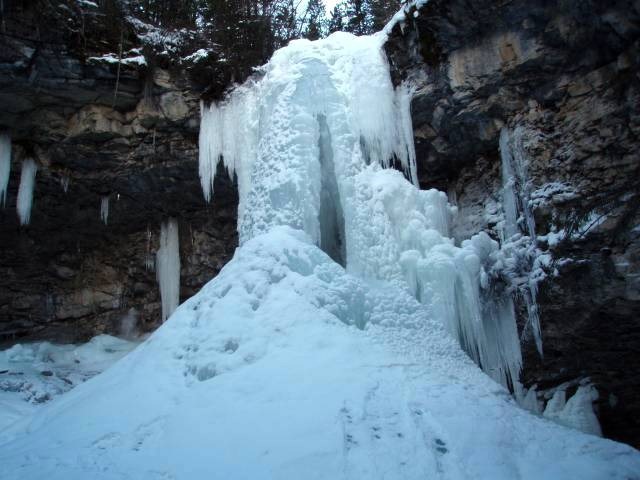 At the base of Troll Falls our ropes will be the first up on the ice this day.  The falls are not formed up as much as expected and there is open water running in the center but ice pillars on either side appear sufficiently sturdy to climb.

A suitable tree for top-roping is a short scramble up and around the cliff face to fix top rope before rappelling to the bottom where turns are taken climbing and belaying. 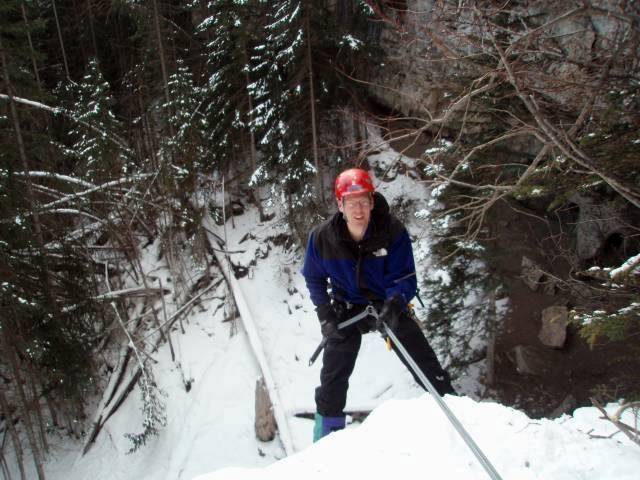 Rapelling off the first cascade of Troll Falls 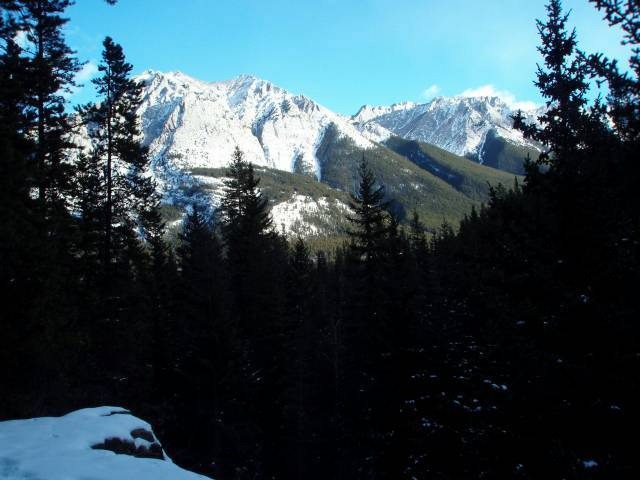 A view from the top of Troll Falls in Kananaskis Country

On the last climb of the first and lowest ice fall the final belay is from the top before packing up to hike around the second tiny falls and on to the third which is entirely different from the first. 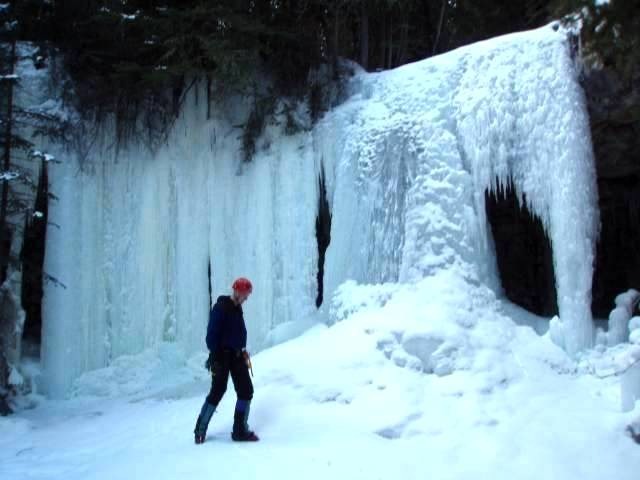 The floods of June 2005 have created new creek paths and a 10 M ice fall that previously was 8 m wide but is now a spectacular wall of ice at least 20 m wide.

We climb around and up to the top of the falls to fix a top rope.  The center is thin ice and water can be seen running inside from both the front and back. 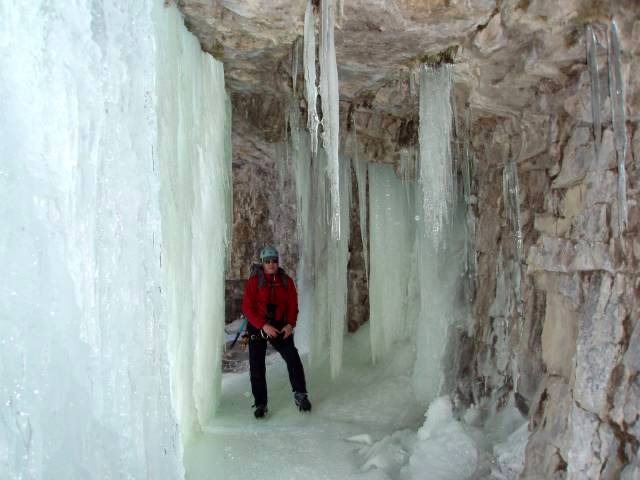 Behind the first cascade of Troll Falls in Kananaskis Country

Careful climbing uses more secure ice on the sides while trying to avoid crampons or ice axes penetrating into water.  The axes stick well but the sound reminds us we are climbing hollow ice.

There is a lot of ice flying around as axes and crampons struggle to dig into brittle ice.  Belaying is combined with dancing while trying to avoid larger chunks of falling ice. 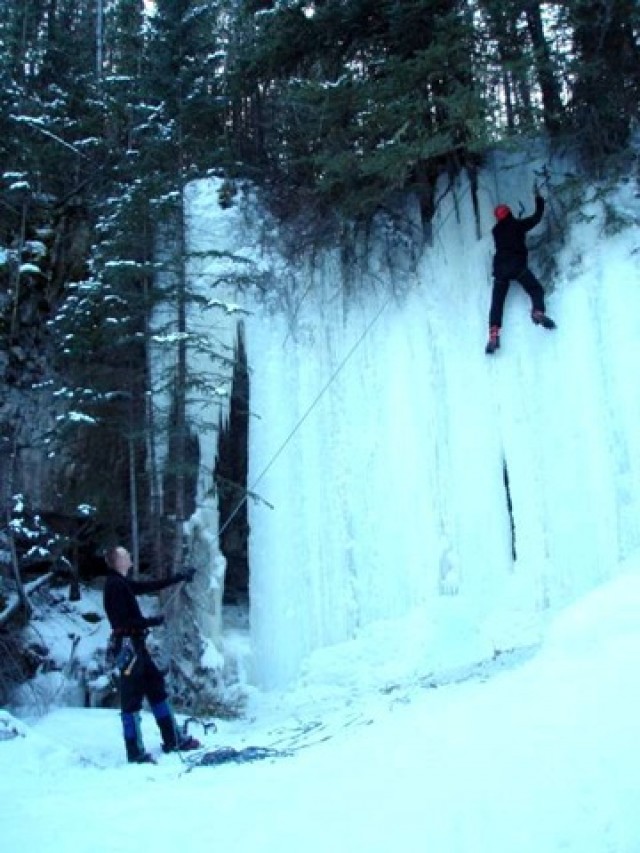 Ascending the third cascade of Troll Falls in Kananaskis 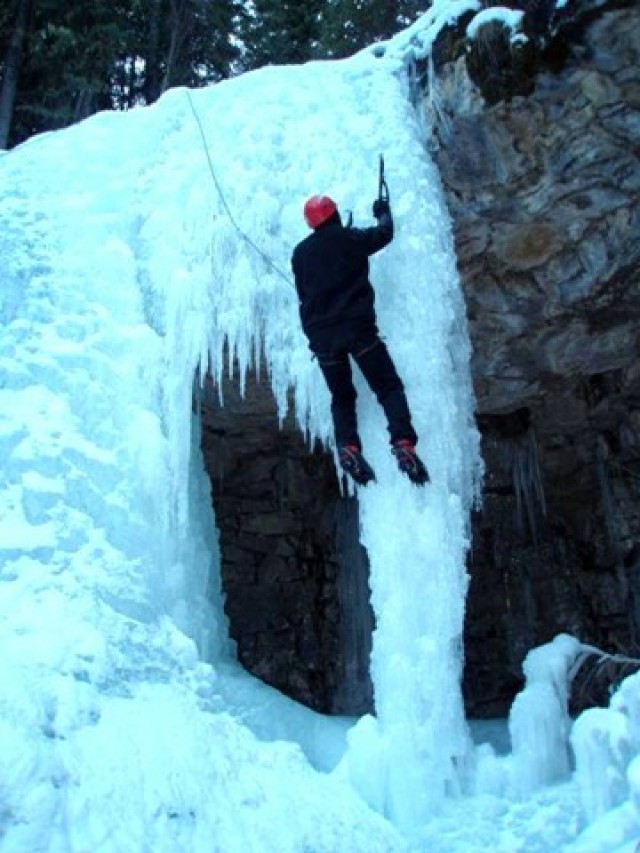 Climbing an ice pillar on Troll Falls in Kananaskis

The belay here is a bit more challenging because the person belaying is always tethered to an ice screw at the base of the ice fall for safety.

Even though the person belaying is wearing crampons, the standing platform is ice and if for any reason it becomes necessary to move quickly to avoid falling ice, the primary task is always to keep the climber in the air.  No compromise.